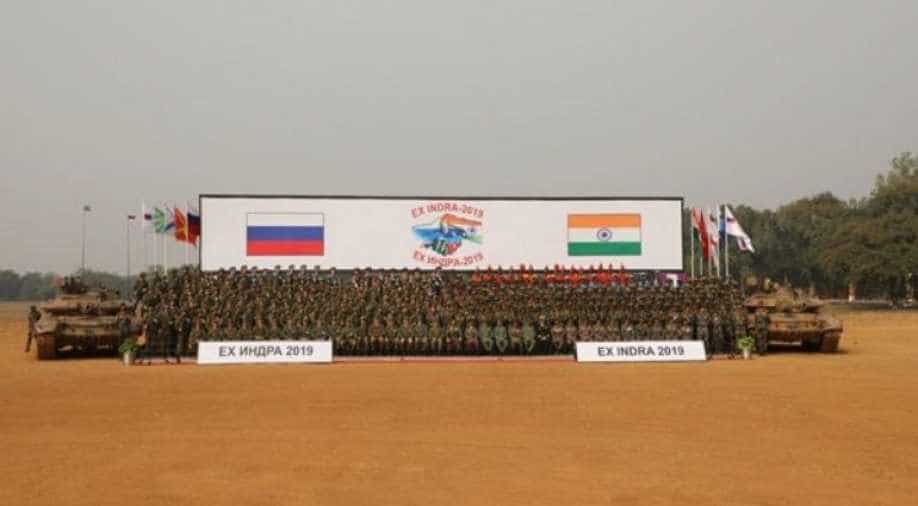 The 10-day long joint exercise Indra 2019 kicked-off on December 10th, 2019 as Russian naval vessels docked at Mormugao in Goa. An opening ceremony was held at the Naval station in Goa to welcome the 700 Russian troops who would be participating in military drills and exercises along with the Indian Army, Navy and Air Force.

The exercise will conclude with a 72-hour validation exercise. Indra 2019 will culminate on 19 December with an Integrated Fire Power demonstration and the Closing Ceremony.

The India-Russia ten-day long joint exercise "Indra 2019" culminated is currently wrapping up at three locations in India. The exercise will conclude with a 72-hour validation exercise.

The massive wargames which had kicked-off on December 10th, as Russian naval vessels docked at Mormugao in Goa. The opening ceremony was held at the naval station in Goa to welcome the 700 Russian troops who participated in the military drills and exercises along with the Indian Army, Navy and Air Force.

The grand scale of the exercise symbolises the continued goodwill and continuance of warm relations between the two old friends. Alignment of interest in a global world order has helped maintain all-round good ties between India and Russia.

The Indian Army is believed to have utilised offensive equipment in the land-based exercises which took place in Babina, Uttar Pradesh (near Jhansi). Some of the heavy equipment included the infantry combat vehicle - BMP-1, as well, as the main battle tank T-90M Bhisma, both of Russian origin.

Company-sized mechanized infantry contingents and the Ghatak platoon of the Indian Army participated alongside their Russian counterparts in Babina, Uttar Pradesh.

The exercise was largely aimed at countering terrorism under the UN mandate. Tactical operations and drills such as cordon house intervention and handling and neutralisation of Improvised Explosive Devices (IEDs) also took place.

Tri services contingents of #Russian and #Indian Armed Forces will rehearse #Counter Terrorism drills in ten day Exercise. Aim of exercise is to hone the skills of troops in conduct of counter terrorism operations under the #UnitedNations mandate. pic.twitter.com/aQ76H2CKtC

"The Russian Federation Navy (RuFN) Ships Yaroslav Mudry, Viktor Konetsky and Elyna arrived in Goa on December 10 to participate in INDRA 2019, the second edition of the tri-services exercise between the Indian and the Russian armed forces," the defence ministry had said in a statement.

INS Aditya and RuFN ship Yaroslav Mudry cast-off from Mormugao harbour on December 16, 2019, to commence the sea phase of the joint tri-service exercise.

INS Tarkash, INS Aditya and RuFN ship Yaroslav Mudry participated in an encounter exercise and cross-deck flying on the same day. Sea riders were also exchanged between the Indian and Russian ships which was followed by air defence exercise involving four MiG29K aircraft.

On Dec 17, a combined boarding team of Indian Navy and Russian Federation Navy personnel conducted boarding exercise to train for anti-piracy operations on a hijacked merchant vessel. Other exercises included firing practice, aviation operations and other manoeuvres like maintaining station and replenishment at sea.

Aerial operations were conducted in the outskirts of Pune, Maharashtra. According to the ministry of defence, the Indian Air Force employed the Su-30MKI multi-role aircraft, Jaguar attack aircraft, MI-17 multi-purpose helicopters and AWACS aircraft. The IAF currently employs its DRDO-made Airborne Warning & Control System(AWCS) on the Brazillian-made Embraer ERJ-145 aircraft. The Air Force Garud commandoes also participated in the exercise as part of counter-terrorism wargames.

The broad theme for the exercise was to organise a Joint Task Force for undertaking planning and execution of air operations for eliminating terrorists at the request of the third country under UN mandate. However, combined missions between IAF and RFAF were also undertaken for enrichening experience and maximising training value in terms of interoperability.

Training together to achieve #Synergy & #Interoperability

"As part of validation exercise held on 19 December 2019, troops of both the countries carried out specialised joint counter-terrorist operations which was witnessed by dignitaries of services of both countries," the defence ministry said.

"The exercise concluded on 19 December 2019 with a ceremonial closing ceremony by both the contingents," the defence ministry added.

'He will be back': Trump, Obama express confidence on Tiger Woods' recovery