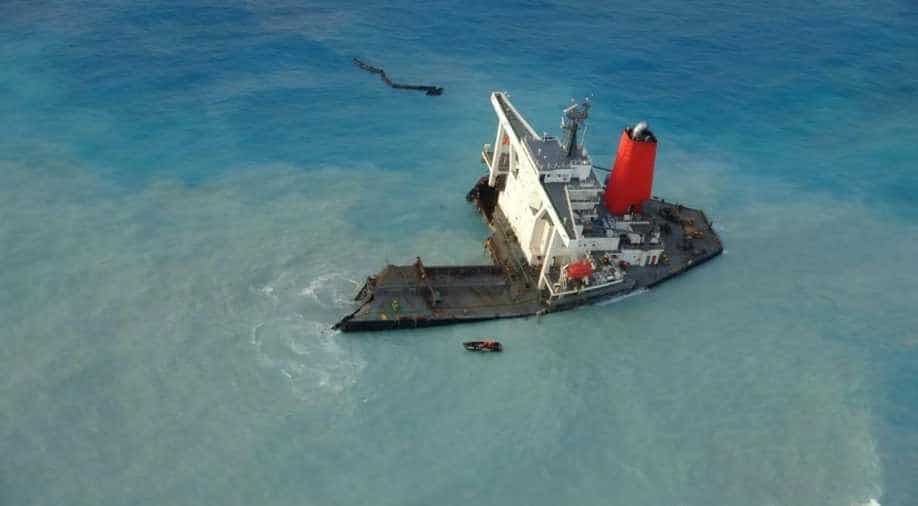 The MV Wakashio, owned by Nagashiki Shipping and chartered by Mitsui OSK Lines Ltd, struck a coral reef on Mauritius`s southeast coast on July 25 and later began leaking oil. Two of the ship`s officers have since been arrested on charges of endangering safe navigation.

The Japanese-owned bulk carrier that ran aground off Mauritius and spilled oil over pristine waters and fragile coral reefs diverted more than 100 kilometres from a regular shipping lane, data from a maritime analysis firm showed.

The MV Wakashio, owned by Nagashiki Shipping and chartered by Mitsui OSK Lines Ltd, struck a coral reef on Mauritius`s southeast coast on July 25 and later began leaking oil. Two of the ship`s officers have since been arrested on charges of endangering safe navigation.

The iron-ore carrier was using a well-travelled shipping lane that passes near Mauritius when the accident happened, according to maritime analysis firm Windward and shipping sources.

Indian Ocean island, the data showed. The data shows the ship`s track during the last few hours of its journey, including a minor turn after crossing into Mauritius` territorial waters.

"It was on a very bad trajectory," Omer Primor, Windward`s head of marketing, told Reuters.

It was not immediately clear why the ship appeared to deviate from its course. Tracking data for other cargo vessels passing close to Mauritius recently show them all sticking to the shipping lane.

The Mauritius coast guard had repeatedly tried to reach the ship to warn it that its course was dangerous but received no reply, Reuters reported this week.

When asked about the Windward data, a Nagashiki Shipping spokesman said: "We have submitted our route record data to the police, but we cannot comment on the data, as the police are investigating the incident".

One regional maritime official said Automatic Identification Systems (AIS) data he had seen did not show the ship`s turn inside Mauritius` territorial waters, but added that it could be because of an inaccuracy in AIS data.

The government of Mauritius and maritime authorities there did not immediately respond to a request for comment on the data.

Mauritius said on Thursday it has started to scuttle the ship, after announcing the plan a day earlier, which had raised alarm from environmentalists worried about further damage after more than 1,000 tons of fuel oil leaked.

Scientists say that the full impact of the spill is still unfolding but that the damage could affect Mauritius and its tourism-dependent economy for decades.

The wildlife at risk include the seagrasses blanketing sand in the shallow waters, clownfish living in coral reefs, mangroves systems, and the critically endangered Pink Pigeon, endemic to the island.