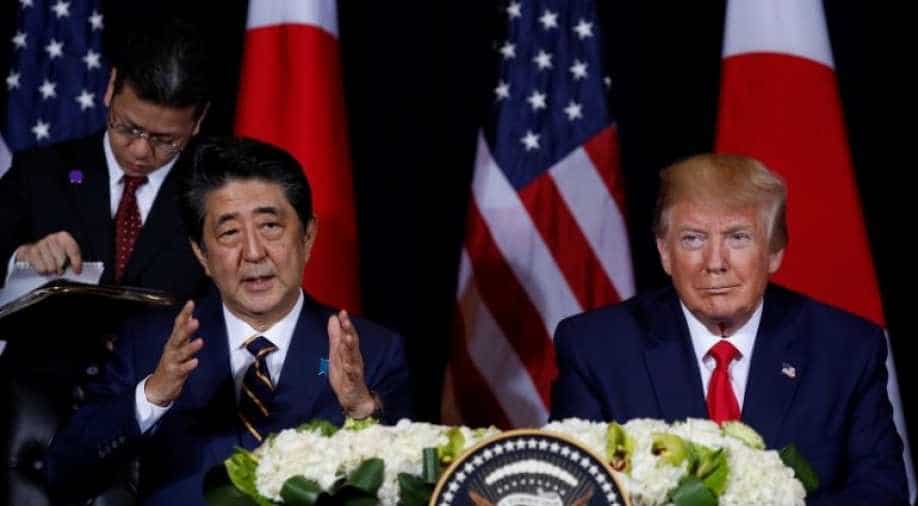 The treaty obligates the United States to defend Japan, which under its US-drafted constitution renounced the right to wage war after World War Two.

Japan and the United States on Friday lauded the decades-old security treaty that is the bedrock of their alliance, but which US President Donald Trump has criticised as "unfair" and imbalanced.

The comments from the two countries' top diplomatic officials marked the 60th anniversary of the current treaty, which was first signed in 1951 and revised in 1960 under Japanese Prime Minister Shinzo Abe's grandfather, then-premier Nobusuke Kishi.

"While honouring the achievements of the past 60 years, we reiterate our unshakeable commitment to strengthen the Alliance and to uphold our common values and principles towards the future," said a joint statement by Japan's Foreign Minister Toshimitsu Motegi and Defense Minister Taro Kono, and US Secretary of State Mike Pompeo and Defense Mark Secretary Esper.

The treaty obligates the United States to defend Japan, which under its US-drafted constitution renounced the right to wage war after World War Two. Japan in return provides military bases used by Washington to project power deep into Asia.

Kishi was forced to resign afterwards following a huge public outcry from Japanese critics who feared the pact would suck their country into conflict.

Echoing his long-held view that Japan is a free-rider on defense, Trump last June told a news conference in Japan that the treaty was "unfair" and should be changed, at a time when China is flexing its regional military muscle and North Korea is pursuing nuclear and missile programmes.

Abe since taking office in 2012 has boosted Japan's defence spending by 10 per cent after years of decline and in a historic shift in 2014, his government reinterpreted the constitution to allow Japanese troops to fight overseas for the first time since World War Two.

But public wariness about putting troops in harm's way and fear of entanglement in US-led wars has hampered Abe's push to revise the postwar constitution's pacifist Article 9.

Article 9, if taken literally, bans the maintenance of a standing military but has been interpreted to allow armed forces for self-defence.

Although generally supportive of the alliance, Japanese voters remain concerned about entanglement in US-led conflicts. A recent survey by Kyodo news agency showed 58.4 per cent opposed Tokyo's decision to send forces to the Middle East to help ensure the safety of merchant ships.