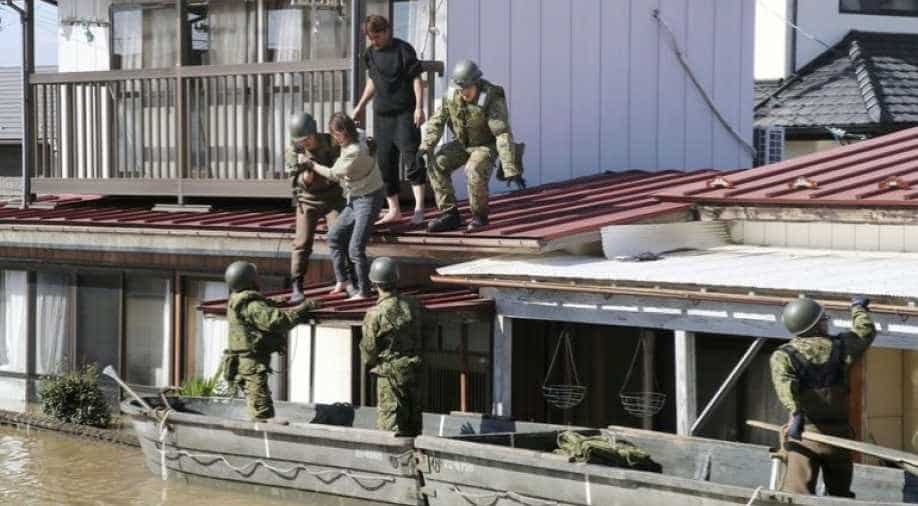 Local residents are rescued by Japapnese Defence-Force soldiers from a flooded area caused by Typhoon Hagibis in Kakuda. Photograph:( Reuters )

Hagibis crashed into the country on Saturday night, but brought hours of heavy rains even before it arrived, causing landslides and filling rivers until they burst their banks.

Tens of thousands of rescue workers were searching Monday for survivors of powerful Typhoon Hagibis, two days after the storm slammed into Japan, killing at least 35 people.

Hagibis crashed into the country on Saturday night, but brought hours of heavy rains even before it arrived, causing landslides and filling rivers until they burst their banks.

The destruction forced the Rugby World Cup being hosted by Japan to cancel several games, but the "Brave Blossoms", as the national team is known, lifted spirits with a stunning 28-21 victory over Scotland on Sunday that put them into the quarter-finals of the tournament for the first time.

More than 110,000 rescuers, including 31,000 troops, worked through the night and into Monday, a national holiday, searching for people trapped by the disaster.

Local media said at least 35 people had been killed, with the Kyodo news agency reporting nearly 20 people were missing. Government figures from Sunday night were lower, though updates were expected on Monday.

While Hagibis, one of the most powerful storms to hit the Tokyo area in decades, packed wind gusts of up to 216 kilometres per hours, it was the heavy rains that caused most damage, with 21 rivers bursting their banks.

In central Nagano, a levee breach sent water from the Chikuma river gushing into residential neighbourhoods, flooding homes up to the second floor.

Military and fire department helicopters winched survivors from roofs and balconies in several locations, but in Fukushima, one operation went tragically awry when a woman died after falling while being rescued.

Elsewhere, rescuers used boats during an hours-long operation to retrieve hundreds of people trapped in a retirement home in Kawagoe, northwest of Tokyo, when floodwaters inundated the building.

One elderly woman wearing an orange life vest was carried from a boat on the back of a rescuer. Others were hoisted into wheelchairs and pushed along a muddy shore after arriving by boat.

Rescue efforts were continuing on Monday morning, with local television showing soldiers rowing a rubber rescue dingy through floodwaters in Fukushima, while elsewhere workers removed dirt with a digger.

The death toll mounted throughout the day Sunday as bodies were recovered from flooded homes and cars, buildings caught in landslides, and swollen rivers.

The dead included a municipal worker whose car was overcome by floodwaters and at least five Chinese crew members aboard a boat that sank in Tokyo Bay on Saturday night.

"Twelve crew were on board. Five Chinese have been found dead," a coastguard official told AFP.

He said four other crew, from China, Myanmar and Vietnam, had been rescued and search operations resumed at daybreak for the remaining three members.

"We plan to dispatch 11 boats, two helicopters and a dozen divers to the site. We are trying our best," he added.

On Monday morning, some 57,500 households remained without power, with 120,000 experiencing water outages.

The disaster left tens of thousands of people in shelters, with many unsure when they would be able to return home.

"Everything from my house was washed away before my eyes, I wasn't sure if it was a dream or real," a woman in Nagoya told national broadcaster NHK.

By Monday, most subway trains had resumed service, along with many bullet train lines, and flights had also restarted.

The storm also brought havoc to the sporting world, forcing the delay of Japanese Grand Prix qualifiers and the cancellation of three Rugby World Cup matches.

But a crucial decider pitting Japan against Scotland went ahead, with the hosts dedicating their win to the victims of the disaster.

"To everyone that's suffering from the typhoon, this game was for you guys," said Japan captain Michael Leitch.