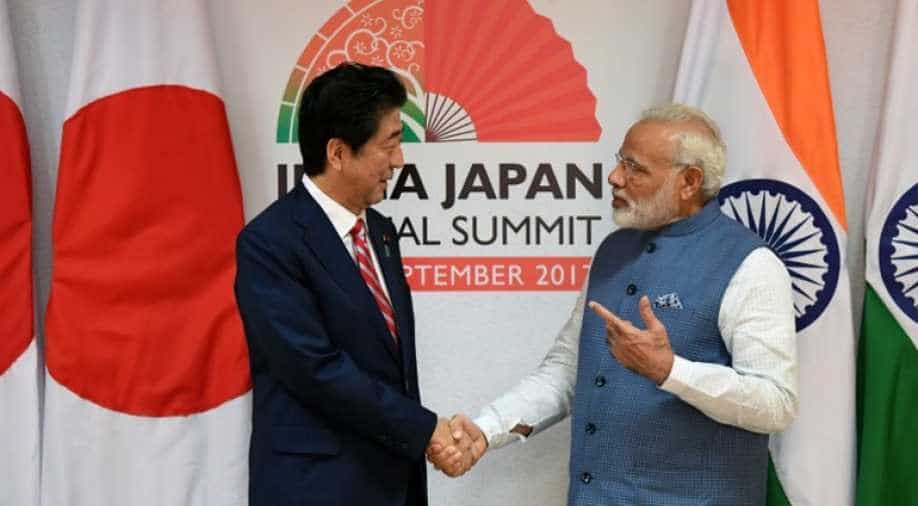 Abe said, 'We will expand and enhance our efforts on free and open Indo-Pacific with India, Australia and ASEAN countries.'

Japan's Prime Minister Shinzo Abe on Monday called for strengthening ties with India as part of 'Free and Open Indo-Pacific.' He said this in a press conference standing along with US President Donald Trump who is on a state visit to the Asian country.

Abe said, "We will expand and enhance our efforts on free and open Indo-Pacific with India, Australia and ASEAN countries."

Abe, who shares close ties with PM-designate Narendra Modi, was the first foreign leader to congratulate the latter after his landslide victory in India's 17th general election.

Abe and Modi will be meeting on the sidelines of the G20 summit in Japan from June 28 to 29.

The Shinzo Abe will also be visiting India later this year for the 14th India Japan Annual Summit that alternates its location between India and Japan.

While Trump stated that US ties with Japan have never been better, Abe said he is determined to show the strength of US-Japan ties to the world.

Trump said that even though there exists an "imbalance" in trade with Japan, the same should be resolved over time.

"I think we will be announcing some things, probably in August, that will be very good for both countries."

Trump and Abe are slated to meet again for the G20 Summit to be held in Osaka, Japan this year.

The two leaders met in Tokyo and discussed a range of issues from Iran, North Korea to bilateral trade.