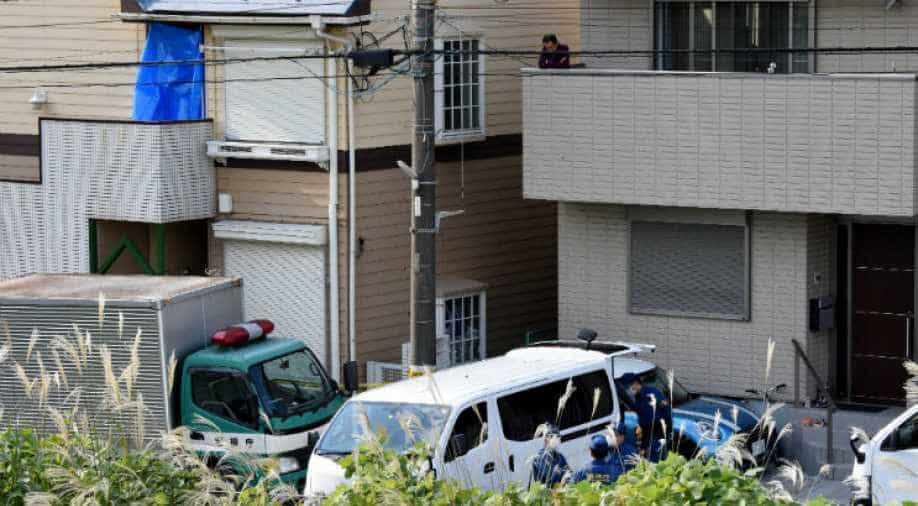 The apartment where Japanese police found nine bodies, including two with their heads severed and dumped in a cool box, in Zama. Photograph:( AFP )

In Japan's bloodiest crime for decades, Satoshi Uematsu faces charges of killing 19 people and attempting to kill or injure 24 others at a disability centre near Tokyo in July 2016.

A Japanese man arrested after police found nine dismembered corpses rotting in his house has confessed to killing all his young victims over a two-month spree after contacting them via Twitter, media reports said Wednesday.

Takahiro Shiraishi, 27, has also confessed he 'assaulted' all of his eight female victims, the Fuji TV network said, using a Japanese media euphemism for sexual attacks.

Prosecutors were now quizzing Shiraishi, who has reportedly admitted hacking the flesh off the bodies and throwing it out with the trash, then sprinkling cat litter over the remains in an effort to cover up the evidence.

In all, some 240 pieces of bone belonging to nine people, including heads and limbs, were discovered inside coolers and toolboxes at his apartment, the Tokyo Shimbun said.

The grisly case has stunned Japan, which enjoys an extremely low crime rate, and pictures of the nondescript apartment building in a quiet residential area were splashed across the country's front pages.

Details also began to emerge as to how investigators tracked down the suspected killer and trapped him using the same medium -- Twitter -- he himself used to lure his victims.

Police were led to Shiraishi while investigating the disappearance of a 23-year-old woman, who had reportedly tweeted she wanted to take her own life.

Her brother managed to hack into her Twitter account, noticed a suspicious handle, and then tweeted about his sister's disappearance, major media said.

One female follower told him that she recognised the handle.

The brother asked her to contact the person, while he also reported the case to police, the Yomiuri daily said.

The woman managed to convince Shiraishi to come to a train station, where investigators awaited and followed him to his house, media say.

Immediately after he returned to his apartment, police knocked on the door and found a white bag belonging to the missing sister, the Yomiuri said.

'When investigators asked the whereabouts of the sister, Shiraishi said 'inside the cooler', pointing at it.' the Yomiuri said.

Shiraishi has reportedly told police that four of his victims were teenagers, four others were around 20 years old and the other was in his or her late 20s. There were eight female victims and one male.

He contacted his prey via Twitter and killed most of them 'on the day he met' them, he is reported to have told authorities.

He moved to the flat in Zama, a southwestern suburb of Tokyo, on August 22 and contacted victims by tweeting that he would help their suicide plans, the Mainichi Shimbun daily reported.

Shiraishi told police that he killed his first victim, a female acquaintance, shortly after moving there, and spent three days dismembering her body, the Yomiuri Shimbun said.

He then killed her boyfriend who asked about his missing girlfriend, the Yomiuri said, citing unnamed police sources.

But his motives remain unclear, and investigators are questioning whether it's possible to kill a person nearly every week without neighbours noticing sounds of altercations or screams, the Tokyo Shimbun said.

Neighbours have since reported noticing a foul smell emanating from the flat.

Shiraishi has told investigators that he kept the body parts because he was afraid he might get caught if he discarded them.

For now, he has been charged with improper disposal of one body but police are searching for evidence he killed all nine.

While Japan prides itself on its low crime rate, it is no stranger to high-profile violent crimes.

In Japan's bloodiest crime for decades, Satoshi Uematsu faces charges of killing 19 people and attempting to kill or injure 24 others at a disability centre near Tokyo in July 2016.

In 1997 a 14-year-old schoolboy decapitated an 11-year-old acquaintance and placed the head at the gates of his school.