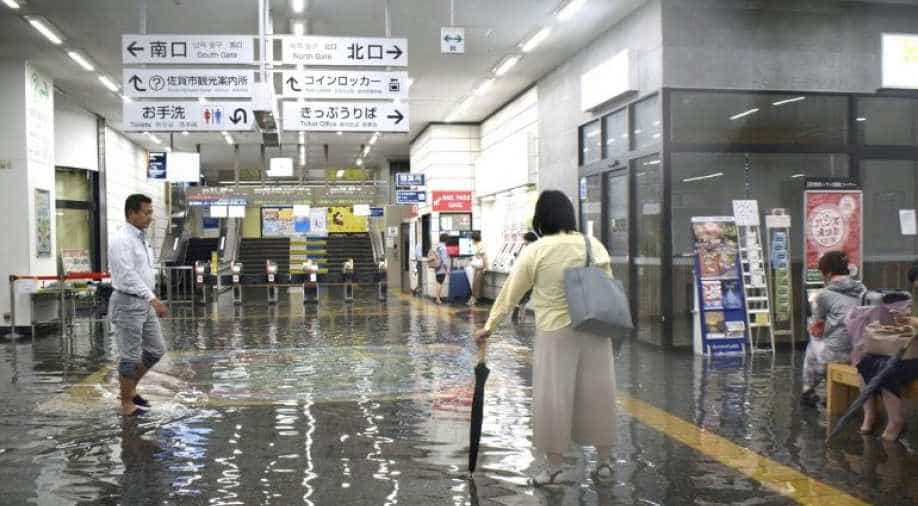 Nearly a million more people are under a lower-level evacuation advisory over the heavy rains.

The evacuation orders came after the Japan Meteorological Agency issued its highest-level alert for several parts of the northern Kyushu region.

The alert is issued "if there is a significant likelihood of catastrophes" and is activated once a disaster is declared, ordering people to take measures to protect their lives.

Nearly a million more people are under a lower-level evacuation advisory over the heavy rains.

Evacuation orders and advisories are issued by local authorities but are not mandatory even though officials urge residents to heed them.

The fire and disaster management agency said it had already received multiple reports of houses flooded in Saga prefecture and officials were working to confirm details of the damage.

"We are seeing unprecedented levels of heavy rains in cities where we issued special warnings," the Japan Meteorological Agency added in a hastily organised press conference Wednesday morning.

"It is a situation where you should do your best to protect your lives," weather agency official Yasushi Kajiwara said.

He also urged those currently facing evacuation advisories to act before the warning was upgraded further.

The JMA's emergency warnings affect areas in Saga, Fukuoka and Nagasaki in northern Kyushu, where the rains have already killed one person.

A Saga official confirmed to AFP a man was found dead in his car on Wednesday after being swept away by floodwaters.

The severe weather has also disrupted transport, with train services partially suspended in parts of northern Kyushu and some roads closed.

In some parts of the affected area, small landslides have already been reported.

Inside Saga station, stranded passengers were sat on benches with water around their ankles.

Many of the deaths were blamed on the fact that evacuation orders were issued too late and some people failed to follow them. Entire neighbourhoods were buried beneath landslides or submerged in floodwaters during the disasters.

Over 12,000 people test positive for COVID-19 after receiving Pfizer vaccine