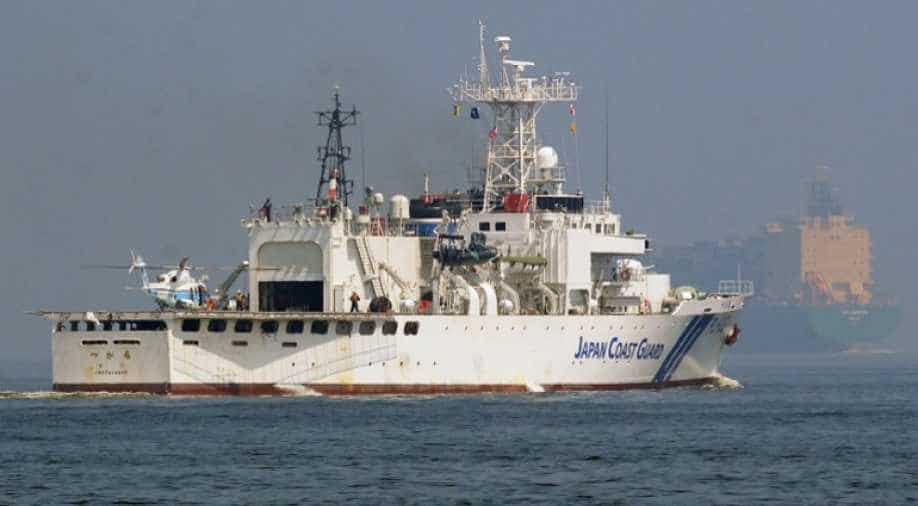 The missing crew members include eight Japanese and one Indonesian. Photograph:( AFP )

In 1945, Japan renounced war and became a pacifist state. 75 years later, it is shifting away from pacifism. Japan is adopting what looks like a strike-first policy. What does it mean?

Japan's Coast Guard can fire missiles if a foreign vessel intrudes into the Senkaku islands. That's what Tokyo has announced.

What are the Senkaku islands? A disputed turf between Japan and China in the East China Sea.

Now, Japan will strike first to protect this turf. Pacifism is part of the Japanese Constitution and the government hasn't changed the Constitution.

It has just found a way around it. Japan has changed the way one law is interpreted. And the result is that the Japanese Coast Guard can strike first. Technically, Japan doesn't have an army but it maintains a self-defence force that has vowed never to use force first.

It's one of the most powerful forces in the world and now, it has signalled an intent to abandon pacifism as the neighbourhood is becoming unsafe thanks to one neighbour.

China is aggressively staking claims in the Indo-Pacific. Last year, Chinese Coast Guard vessels entered Japanese waters twice a month. Then, China enacted a new law. It allows the Chinese Coast Guard to use weapons against foreign ships. So, Japan's measure is essentially a tit-for-tat.

Here is why it was necessary. China is deploying vessels with lethal firepower around Japan. Hundreds of Chinese vessels entered the waters around the Senkaku islands last year.

Reports say Chinese vessels were spotted there for a record 333 days. For 111 days, these Chinese vessels maintained a continuous presence. So, Japan has now told its coast guard. It is free to shoot at foreign vessels and it is also getting more firepower.

This year, the Japanese military budget is expected to be around 51 billion. It has grown for nine years straight.

In 2020, the Japanese military performed 25 missions in defence of US ships or planes. This shows the growing defence integration between the US and Japan. These missions were in addition to the Malabar exercise hosted by India in November 2020.

Here Japan participated alongside the United States and Australia. These four countries make up the Quad alliance. They are steadily expanding their partnership. The Japanese prime minister spoke with his Australian counterpart Scott Morrison on Thursday. They discussed Chinese military aggression as well as the need for an open and free Indo Pacific.

Reports say Japan and Australia are now working on a mutual defence treaty. This week, France, Australia and India held a trilateral of their own. Senior officials attended this meeting. They are said to have discussed ways to expand their cooperation in the Indo Pacific.

It seems like doors are being opened for more allies to work with the Quad. Earlier this week, US secretary of state Antony Blinken spoke to his counterpart in Bangladesh AK Abdul Momen.

According to a statement from Washington, Blinken and Momen would like a closer collaboration to 'address challenges in South Asia and the greater Indo-Pacific region'.

China understands the language of strength. How India responded to the Chinese border aggression is the proof of that. Japan is deploying the same playbook. Its wants to take on the Chinese threat from a position of strength with military power and Tokyo can bank on its Quad allies and partners for support on this front.