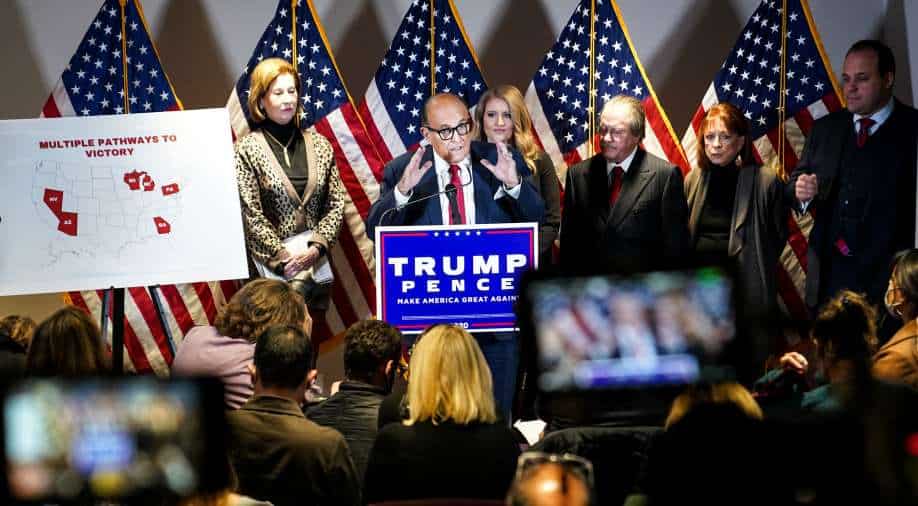 On Jan. 6, speaking to a crowd of Trump supporters before the attack on the Capitol, Giuliani called for 'trial by combat.' Later, as the building was under siege, he called lawmakers in an attempt to delay the certification of Joe Biden’s victory.

The House committee investigating the Jan. 6 attack on the Capitol on Tuesday subpoenaed Rudy Giuliani and other members of the legal team that pursued a set of conspiracy-filled lawsuits on behalf of former President Donald Trump in which they made unsubstantiated claims of fraud in the 2020 presidential election.

In addition to Giuliani, Trump’s personal lawyer and a ringleader of the group, the panel subpoenaed three others who played central roles in his effort to use the courts, state legislatures and Congress to try to overturn his defeat.

Jenna Ellis drafted a memo on how Trump could invalidate the election results by exploiting an obscure law. Sidney Powell, a lawyer who worked on many of the lawsuits with Giuliani, ran an organization that raised millions of dollars based on false claims that election machines were rigged. Boris Epshteyn pursued allegations of election fraud in Nevada and Arizona and is said to have participated in a call with Trump on the morning of Jan. 6, “during which options were discussed to delay the certification of election results,” the committee said.

“The four individuals we’ve subpoenaed today advanced unsupported theories about election fraud, pushed efforts to overturn the election results or were in direct contact with the former president about attempts to stop the counting of electoral votes,” Rep. Bennie Thompson, D-Miss. and the chairman of the committee, said in a statement.

The subpoena to Giuliani, obtained by The New York Times, seeks all documents he has detailing the pressure campaign he and other Trump allies initiated targeting state officials; the seizure of voting machines; contact with members of Congress; any evidence to support the bizarre conspiracy theories pushed; and any arrangements for his attorney’s fees.

The panel instructed the four witnesses to turn over documents and submit to an interview in February.

The latest subpoenas came as the committee, which has interviewed nearly 400 witnesses, has issued a wide range of demands for records, including to banks and phone companies. On Tuesday, CNN reported that the committee had also obtained logs of phone calls and text messages belonging to the former president’s son Eric Trump and to Kimberly Guilfoyle, the girlfriend of another son, Donald Trump Jr. The logs do not reveal the content of the messages.

A committee spokesperson declined to comment on that report.

For weeks after the election, Giuliani and his team — which Ellis described as an “elite strike force” — promoted baseless claims of voter fraud through failed lawsuits, news conferences, media appearances and meetings with lawmakers.

The committee said in a letter to Giuliani that its investigation had revealed “credible evidence” that he participated in attempts to “disrupt or delay the certification of the election results,” convince state legislators to “take steps to overturn the election results” and urge Trump to order the seizure of voting machines.

Giuliani claimed fraud at a series of unofficial state legislative hearings, and even argued one election fraud case himself, in federal court in Philadelphia, where he suffered a decisive defeat.

“Voters, not lawyers, choose the president,” the court declared at one point.

On Jan. 6, speaking to a crowd of Trump supporters before the attack on the Capitol, Giuliani called for “trial by combat.” Later, as the building was under siege, he called lawmakers in an attempt to delay the certification of Joe Biden’s victory.

“Sen. Tuberville, or I should say coach Tuberville, this is Rudy Giuliani, the president’s lawyer,” Giuliani said in a voicemail message intended for Sen. Tommy Tuberville, R-Ala., but mistakenly left on the phone of Sen. Mike Lee, R-Utah. “I’m calling you because I want to discuss with you how they’re trying to rush this hearing and how we need you, our Republican friends, to try to just slow it down.”

Ellis, the committee said, “prepared and circulated” two memos analyzing the constitutional authority for former Vice President Mike Pence to reject or delay counting electoral votes from states where Trump’s allies had attempted to arrange for the submission of an alternate slate of electors. In the memos, obtained by Politico, Ellis advised that Pence had the authority to not count electoral votes from six states in which the Trump campaign falsely alleged there was widespread fraud.

Powell was among the leading promoters of some of the most far-fetched and fantastical claims of widespread voter fraud, including a bizarre conspiracy theory alleging a vast plot by China, Venezuela and financier George Soros to hack into Dominion Voting Systems machines to flip votes away from Trump to Biden.

She, too, urged Trump to seize voting machines, according to the committee.

In December, Trump considered naming Powell to be a special counsel overseeing an investigation of voter fraud, even after his campaign had sought to distance itself from her as she aired wild and baseless claims about Dominion voting machines.

Her organization, Defending the Republic, raised $14.9 million between December 2020 and July. Powell’s group has more than $9.3 million in funds on hand, according to an independent audit filed with Florida, which investigated the organization and alleged multiple violations of state law.

Epshteyn reportedly attended planning meetings at the Willard Hotel in the days leading up to Jan. 6, the committee said. The panel, citing reporting from The Guardian, said he also participated in a call with Trump the morning of Jan. 6 that included a discussion of Pence’s “unwillingness to deny or delay the certification.”

Giuliani is facing a defamation lawsuit from Dominion Voting Systems, alleging he carried out “a viral disinformation campaign about Dominion” made up of “demonstrably false” allegations, in part to enrich himself through legal fees and his podcast.

In June, his law license was suspended after a New York court ruled he made “demonstrably false and misleading statements” while fighting the results of the 2020 election.

An internal memo made public through a defamation suit filed by a Dominion employee revealed in November that Trump’s campaign had determined many of the outlandish claims they were making about election machines were untrue.

On Twitter, Epshteyn said he was not surprised by the subpoena. He accused the committee of engaging in a “Stalinist witch hunt” against Trump and his supporters.

Robert Costello, a lawyer for Giuliani, called the subpoena “political theater” and said Giuliani would be covered by executive privilege, should Trump invoke it, as well as attorney-client privilege.

“They’re not going to charge Rudy Giuliani with anything, and they’re also not going to get any information from Rudy Giuliani factually,” he said, adding: “Did they even call me and even ask if Rudy would voluntarily talk to them?”

Ellis and Powell did not immediately respond to requests for comment.