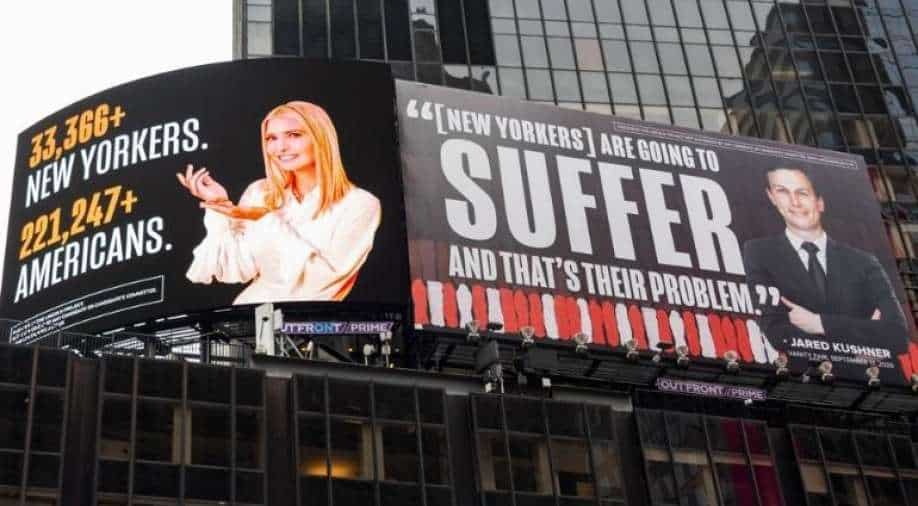 Images of Ivanka Trump and Jared Kushner are seen alongside messages about coronavirus disease (COVID-19) infections and deaths on billboards sponsored by The Lincoln Project above Times Square in New York City Photograph:( Reuters )

Marc Kasowitz, a lawyer representing Ivanka Trump and her husband, Jared Kushner, sent a letter to the coalition calling the ads 'false, malicious and defamatory' and saying they constituted 'outrageous and shameful libel.'

President Donald Trump’s daughter and son-in-law and top White House aides Ivanka Trump and her husband Jared Kushner threatened a lawsuit against 'The Lincoln Project', a coalition of anti-Trump Republicans working against his re-election in November.

The coalition had posted billboard ads in New York City’s Times Square linking them to the country’s almost 225,000 coronavirus deaths.

Marc Kasowitz, a lawyer representing Ivanka Trump and her husband, Jared Kushner, sent a letter to the coalition calling the ads “false, malicious and defamatory” and saying they constituted “outrageous and shameful libel.”

“If these billboard ads are not immediately removed, we will sue you for what will doubtless be enormous compensatory and punitive damages.”

'The Lincoln Project' hit back by posting the letter on its official Twitter handle and calling it ''nuts''.

It further went on to say that "The billboards will stay up" and that Ivanka and Kushner can sue them 'if they must''.

The Lincoln Project’s legal response to the frivolous threat of a lawsuit from Jared Kushner and Ivanka Trump’s lawyer.

This will not be the last they hear from us. pic.twitter.com/GNnFsnsCer

“While we truly enjoy living rent-free in their heads, their empty threats will not be taken any more seriously than we take Jared and Ivanka,” the group said.

One of the ads features a smiling Ivanka Trump gesturing towards text showing the number of coronavirus deaths in New York and nationwide. The other is a photo of Kushner next to a quote attributed to him last month by Vanity Fair magazine, citing an unidentified source: “(New Yorkers) are going to suffer and that’s their problem.”