Italy PM Gentiloni and his new cabinet sworn in 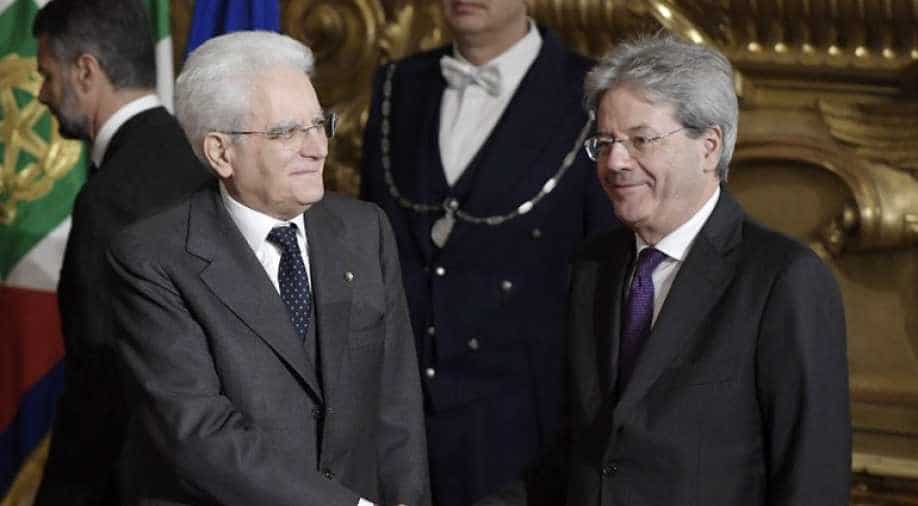 The new government will guide Italy to elections due by February 2018, but which could come up to a year early.

"I put my everything into finding the fastest solution possible" to the crisis, Gentiloni said.

"As you can see from its make-up, the government will continue the innovative path of the Renzi government," he added.

In a time-honoured tradition, Renzi symbolically handed over power to Gentiloni by passing him a little silver ceremonial bell.

Gentiloni named Angelino Alfano -- a former protege of ex-prime minister Silvio Berlusconi -- to take over his role as foreign minister.

Pier Carlo Padoan stays on as finance minister in a move likely to reassure the markets Italy can deal with a brewing crisis in the banking sector.

Alfano's post as interior minister under Renzi goes to Marco Minniti, who was the state secretary with responsibility for the security services in the outgoing administration.

Maria Elena Boschi, who was the minister in charge of constitutional reforms under Renzi -- and therefore responsible for the very reform that lead to his downfall -- becomes undersecretary to the prime minister.

The 35-year old is a die-hard Renzi ally and is expected to ensure the former PM's voice is still heard in the new administration.

"Good luck to Paolo Gentiloni and the government with the job. Long live Italy," Renzi said on Twitter.

Opposition parties have slammed the softly-spoken Gentiloni as little more than a Renzi puppet.

The anti-establishment Five Star movement said keeping the old crew at the helm ignored the wishes of those who voted against Renzi at the referendum.

Its founder, comic Beppe Grillo, said the Stars would organise a mass protest for January.

Giorgia Meloni from the right-wing Brothers of Italy also slammed it as "a spit in the face for the Italians" and promised a large rally.

Gentiloni admitted the referendum defeat had revealed mass discontent among the middle classes and young over the sluggish economy and unemployment, and said the job market would be "a priority for this government".

"I won't deny there are difficulties" in the wake of Renzi's fall, but "the government will get to work immediately... with strength and optimism" he said.

Silver-haired Gentiloni, a one-time student radical from an aristocratic family, will seek parliamentary approval of his new government on Tuesday.

The market had also been buoyed by relief over the news the Italian government would intervene to recapitalise Italy's Monte dei Paschi di Siena bank (BMPS), should it fail to raise the money from private investors needed to stay afloat.

And just hours after Gentiloni was named as prime minister, the ailing bank said it was hopeful a bailout could be avoided.

Oanda analyst Craig Erlam said investors were "more optimistic" the bank could raise the 5 billion euros ($5.29 billion) needed to avoid a handout and were relieved political uncertainty had been removed in the short term at least.

Gentiloni has been rushing to resolve the political crisis in time for Italy to attend the European Council meeting in Brussels on Thursday, where the pressing issue of migration is on the table.

Italy is on the frontlines of the migrant crisis, with a record 175,000 people landing on its shores this year alone.

Renzi may be down and out for now, but analysts said he had tapped Gentiloni to replace him because he trusts him to keep his seat warm for the next general elections, which could be brought forward to early next year.