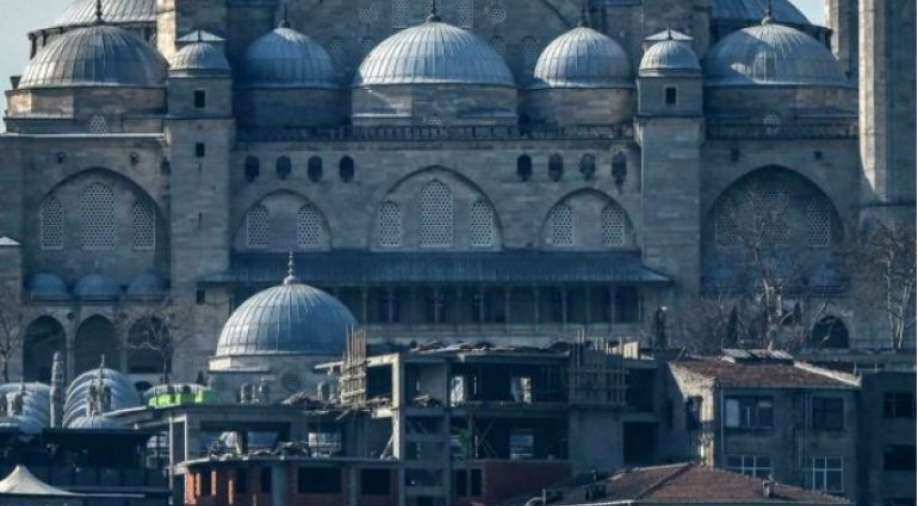 Three huge skyscrapers in the Zeytinburnu neighbourhood triggered public uproar but they remain standing despite a court verdict and the urging in 2013 of President Recep Tayyip Erdogan, then prime minister, for the owners to reduce their height.

The soaring minarets of the 16th-century Suleymaniye mosque paint the postcard image of Istanbul, but that is now blighted by rickety wooden scaffolding at a nearby construction site, sparking fury on social media.

"The disrespect, there is no recognition of any proportion or any limit," Esin Koymen, head of the Istanbul Chamber of Architects, told AFP.

"There's this talk that the new buildings betray Istanbul's silhouette but it's quite upsetting to see the continuing recklessness on a landmark historical compound," she said.

"This needs to stop."

The mosque was built from 1550-57 by the celebrated Ottoman architect Sinan and dominates the peninsula that also houses the Grand Bazaar.

A UNESCO World Heritage site, the mosque which has survived fires and an earthquake, represents the golden age of the Ottoman Empire under Suleyman the Magnificent.

With its minarets and giant dome, the complex offers an unparallelled view of the Golden Horn and the Bosphorus.

It is not the first time Istanbul's skyline has been threatened by concrete and high-rise towers.

Three huge skyscrapers in the Zeytinburnu neighbourhood triggered public uproar but they remain standing despite a court verdict and the urging in 2013 of President Recep Tayyip Erdogan, then prime minister, for the owners to reduce their height.

'We will protect it'

The Foundation for the Expansion of Knowledge, owner of the building and whose board of trustees' chairman is Erdogan's son Bilal, insisted the construction of a student dormitory was "not illegal".

However the foundation was forced to take a step back after the rising block drew rebuke even from conservative quarters.

"We will not be involved in any action that goes against Suleymaniye's soul," the foundation's acting chairman Nurettin Alan told journalists in the mosque's courtyard last week.

"Suleymaniye is our soul, we'll protect it."

Moreover, Alan accused the Istanbul municipality of "politicising" the issue by locking up the building despite their decision to stop construction, which had reached nearly 16 metres.

"What a pity. Our sacred values are being exploited for profit," Twitter handle @1974asude commented.

Yusuf Kaplan, a columnist for pro-government Yeni Safak daily, took up the call for Suleymaniye's "soul" to be protected.

"We are the only nation in the world which destroys its cities," he said, adding the mosque's surroundings should be "cleaned up".

"Compare the pictures from 2016 and 2022. Anyone who looks to the Bosphorus through the poetic domes of Suleymaniye knows (that building) was not there," Polat told AFP.

Polat, who raised the alarm in 2020 over worrying restoration work at the Galata Tower, built in 500 AD as a watchtower and now a museum, defended locking up the new building.

It had "nothing" to do with politics or ideology, he said.

"Read whoever wrote about Istanbul, be it travellers in the past or modern authors, they describe it as the city of domes. This silhouette is exactly the area whose frontage is closed off now," by recent construction.

But Polat said the foundation's building was not the only risk to the historical site, referring to many others in the surrounding area, most of which were constructed in the 1970s and the 80s.

He said only 50 out of 525 historical mansions are left at the Suleymaniye compound, according to the municipality, and assured them they would work to restore the vanishing historical fabric.

"We will save Suleymaniye. Excuse us, but it is not as easy as knocking it down. "

Polat said his office wants to solve the issue through dialogue with the parties concerned, including the local Fatih municipality, run by Erdogan's ruling AKP.

Esin Koymen, at the Chamber of Architects, lamented that cultural affairs had become a tool of politics.

"If you preserve the historical fabric, and if it's a mosque, you're labelled pro-government," she said.

"If you preserve Byzantine (heritage) you're labelled the opposition... this polarisation does not recognise universal preservation principles."

Polat suggested culture and politics should be kept separate "because political actors have a time-span of 10-20 years but Suleymaniye has been there for 500 years".