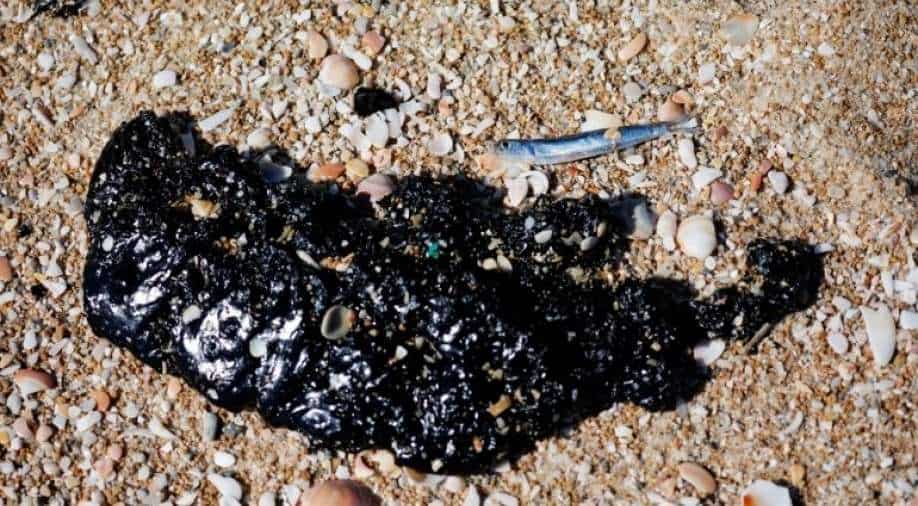 A file photo of a clump of tar seen on the sand an after an offshore oil spill drenched much of shoreline with tar. Photograph:( Reuters )

Officials said it is an environmental blow that will take months or years to clean up. The tar, itself apparently released by a ship unloading oil or by old tar lifted by the storm from the seabed, killed many marine creatures.

Thousands of volunteers gathered on Sunday to remove the clumps of sticky black refuse from the pale beaches. Israel's military said it was deploying thousands of soldiers to help with the effort. Authorities warned everyone else to keep their distance until further notice.

Environmental groups called it a disaster. Attesting to the cost to wildlife, they posted pictures of tar-covered turtles.

The event began last week during a winter storm, which made it harder to see the tar approaching and deal with it at sea, Israeli officials said.

Together with European agencies, Israel was looking as a possible source at a February 11 oil spill from a ship passing about 50 km (21 miles) from shore. Satellite images and modelling of wave movements were helping to narrow the search.

Nine ships that were in the area at the time are being looked at, said Environmental Protection Minister Gila Gamliel.

"There is a more than reasonable chance that we will be able to locate the specific ship," she told Ynet TV.

If found, Israel could take legal action. One course would be to sue insurance companies for compensation to help deal with the ecological fallout, she said, which could cost tens of millions of shekels.

Late last week a 17-metre-long (55ft) fin whale was found washed up on a beach in southern Israel.

The Nature and Parks Authority said on Sunday that an autopsy had found oil-based material in the whale's body, with further tests pending.