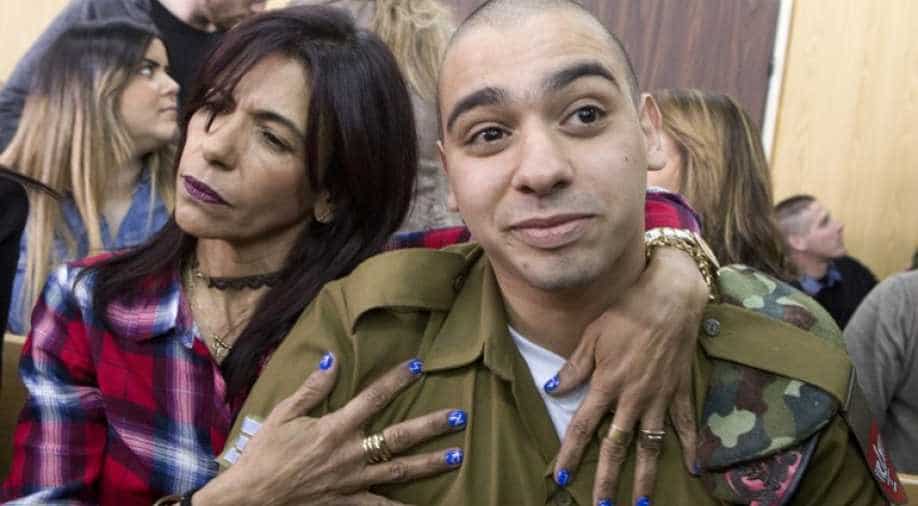 An army spokeswoman later said the court would hold a hearing on Thursday to rule on a defence request for Azaria's sentence, due to start on March 5, to be delayed. Photograph:( AFP )

An Israeli soldier sentenced to 18 months in prison for shooting dead a wounded Palestinian assailant appealed against his manslaughter conviction and jail term on Wednesday, his legal team said.

Elor Azaria was sentenced by a military court on February 21 after an exceptional months-long trial that captivated Israel and highlighted deep divisions in public opinion.

Azaria was caught on video by a rights group shooting Abdul Fatah al-Sharif in the head as he lay wounded on the ground in the occupied West Bank city of Hebron in March 2016 after stabbing a soldier.

Defence attorney Yoram Sheftel filed the appeal to the military court, a spokesman for the lawyer told AFP.

An army spokeswoman later said the court would hold a hearing on Thursday to rule on a defence request for Azaria's sentence, due to start on March 5, to be delayed.

The outspoken Sheftel, who joined Azaria's defence team in January, won his fame successfully representing Nazi death camp guard John Demjanjuk in the appeal against his death sentence in Israeli in 1993.

Speaking to the press hours after filing the appeal, Sheftel lashed out at the "bloodthirsty" military prosecutors, accusing them of rejecting offers of mediation and calling Azaria the "victim" of the "shameful investigation".

Azaria's father Charlie thanked "all of our supporters, who are 90 percent of the nation", saying his son had been framed and vowing to fight to the end "until my son's innocence is revealed".

Three other lawyers, who had represented Azaria from the initial stages of his arrest, announced earlier on Wednesday they were resigning from the case.

One of them, Eyal Besserglick, told AFP they had prepared part of the appeal, which related to both the conviction and the sentencing.

In a statement, the resigning lawyers said they believed avenues other than an appeal would be preferable to Azaria.

A number of ministers, including Prime Minister Benjamin Netanyahu, have called for him to be pardoned, a process under the jurisdiction of President Reuven Rivlin.

Azaria could also have his sentence commuted to a conditional sentence by the head of the central military command.

Military leaders have said the conviction is important for the institution's reputation.

The Palestinian government, the victim's family and the United Nations human rights office have criticised the sentence as too lenient.