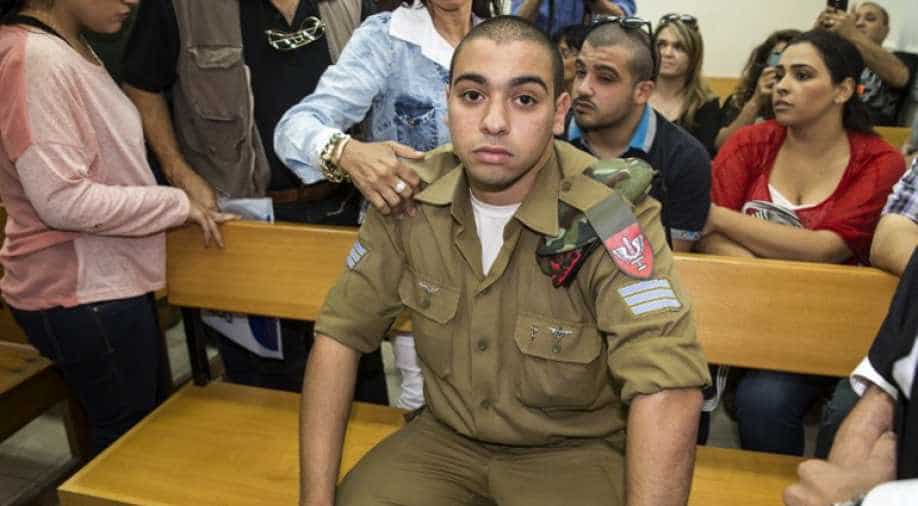 Azaria was 19 at the time of the killing in March 2016 in the city of Hebron in the occupied West Bank. Sentencing is expected at a later date. Photograph:( AFP )

An Israeli soldier who shot dead a wounded Palestinian assailant as he lay on the ground posing no apparent threat was convicted of manslaughter Wednesday after a trial that deeply divided the country.

The soldier, Elor Azaria, had been on trial in a military court since May, with right-wing politicians defending him despite top army brass harshly condemning his actions.

Sentencing is expected at a later date. He faces up to 20 years in prison.

Judge Colonel Maya Heller spent more than two and a half hours reading out the decision, sharply criticising the arguments of Azaria's lawyers.

On behalf of the three-judge panel, Heller said there was no reason for Azaria to open fire since the Palestinian was posing no threat. She called Azaria's testimony "evolving and evasive".

Azaria's demeanour drastically changed as the judge read the verdict. Dressed in a green army uniform, he had entered the courtroom smiling, with family members and supporters applauding him. But he and his family later looked shaken as the judge spoke, with his mother and father huddling together.

After the verdict, his mother yelled: "You should be ashamed of yourselves". Azaria was 19 at the time of the killing in March 2016 in the city of Hebron in the occupied West Bank.

In a sign of the tensions surrounding the case, dozens of protesters scuffled with police Wednesday as they gathered outside Israel's military headquarters in Tel Aviv, where the verdict was announced.

They held a sign that read: "People of Israel do not abandon a soldier in the battlefield".

Others on the right have called for him to be pardoned in an extraordinary public rift between politicians and the country's military.

Before he became Israeli defence minister in May, Avigdor Lieberman was among those showing strong support for Azaria, including attending one of his court appearances.

He has since backed away from his earlier stance and, immediately after Wednesday's verdict, said he disagreed with the decision but that it must be respected.

"I call on politicians to stop attacking the security establishment and the army and its chief of staff," he said.

Others however from what is seen as the most right-wing government in Israeli history maintained their hardline position.

"He's our son, our child," Culture Minister Miri Regev told Israeli television, saying Azaria should not have faced a criminal trial. The case burst into public view when a video of the March 24 shooting emerged and spread widely online.

The video showed Abdul Fatah al-Sharif, 21, lying on the ground, shot along with another man after stabbing and moderately wounding a soldier minutes earlier, according to the army. Azaria then shoots him again in the head without any apparent provocation.

His lawyers argued the soldier may have thought the Palestinian was wearing explosives, but others said he had already been checked for a suicide belt and no one in the video appears to be acting with caution toward him.

Military chief of staff Gadi Eisenkot has spoken out against the politicisation of the case, warning it could badly harm the army. He said rules on when to open fire must be followed.

The case galvanised the Israeli public, and television and radio stations interrupted their broadcasts to carry live coverage of the verdict. It had been portrayed by some as a test of whether Israel's military could prosecute one of its own, though many Palestinians dismissed it, arguing Azaria was only taken to trial because of the video.

The military has said it began investigating before the release of the video, filmed by a Palestinian volunteer for Israeli rights group B'Tselem. The shooting came against the backdrop of a wave of Palestinian knife, gun and car-ramming attacks that erupted in October 2015.

Israeli security forces have been accused of excessive force in certain other cases as well, though authorities say officers act appropriately to protect themselves and civilians.

Most of the attacks were by lone-wolf assailants, many of them young people, including teenagers. Israel's military has said it believes a significant number of them were essentially on suicide missions.

The violence has greatly subsided in recent months.