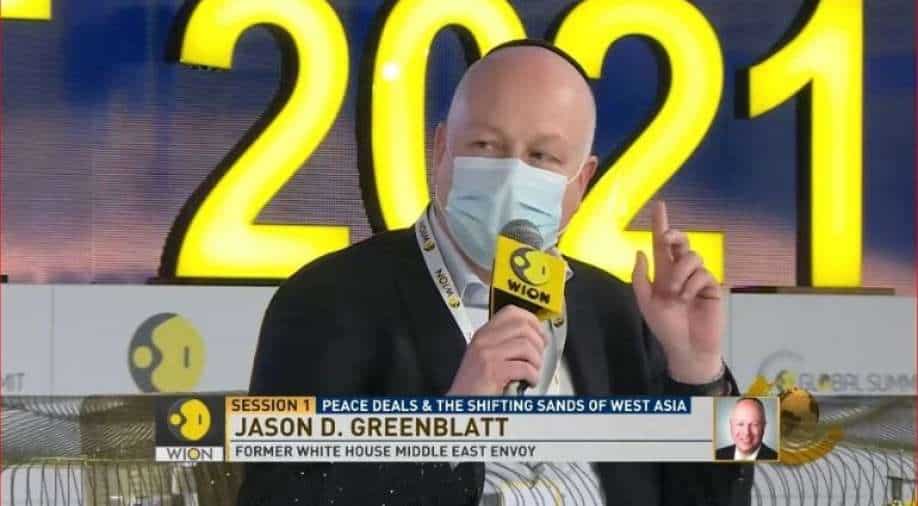 The Palestinians regarded these deals as a betrayal, maintaining that Arab states should isolate Israel until the people living in the occupied West Bank and the Gaza Strip have their own independent state

In the Abraham Accords brokered by the US under former president Donald Trump, Israel established relations with UAE and Bahrain, its first such agreements in the Arab world since its peace treaties with Egypt in 1979 and Jordan in 1994.

The Palestinians condemned the agreements as a "stab in the back". They regarded these deals as a betrayal, maintaining that Arab states should isolate Israel until the people living in the occupied West Bank and the Gaza Strip have their own independent state.

Former White House Middle East envoy Jason D Greenblatt said on Wednesday that the peace deals were ''build on the success and the work of others who strived hard for them.''

Speaking at the WION Global summit in Dubai on Wednesday, he said that ''we decided to move away from phrases like two-state solutions which meant different things to different people. Our purpose was to re-educate the people about the conflict.''

Greenblatt said that under the strong leadership of Trump, Sheikh Mohammad Bin Sayed, Israeli Prime Minister Benjamin Netanyahu, King of Bahrain and Morocco realised that ''people were tired of conflict and wanted to move on.''

''The results speak for themselves,'' he added.

Asked what he thought Trump's team did differently from others, Greenblatt said, ''We spoke openly and honestly. There was no leader who wanted to speak otherwise. We were very clear with the leadership in the region.''

Praising Trump, Greenblatt said everyone may not agree to his manner of speaking, but speaking directly is key to solving issues.

''We raised the tough issues and ripped the band-aid off over the wounds and tried to clean them.''

''We were able to make progress. However, we are not able to solve all issues. The Israel-Palestine issue is still brewing. It may brew for a very long time. It is not yet ripe for solving,'' said Greenblatt.

The peace deals proved that Israel-Palestine conflict and Israel-Arab conflict, though intricately tied together, can indeed be separately solved, he said. "That's essential for the region, given all the other conflicts in the world. It only helped with the COVID situation and it will lead to a better future.''