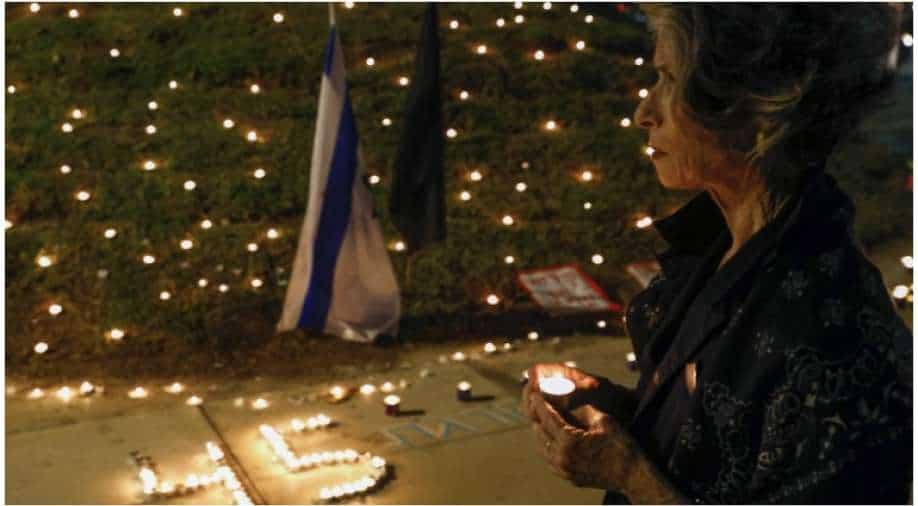 People light candles during a vigil in Habima Square in the Israeli coastal city of Tel Aviv on May 1, 2021,in the aftermath of a deadly stampede in a northern Jewish pilgrimage town. Photograph:( AFP )

Sunday has been declared a national day of mourning

Israel resumed funerals for stampede victims on Saturday. The stampede that took place on April 30 killed 45 people at a Jewish pilgrimage site. This was Israel's worst peacetime disaster.

One of the funerals was to be for Yedidya Hayut, a 13-year-old boy whose father was injured in the crush, according to local media reports.

Tens of thousands of people had thronged to Mount Meron in northern Israel and the reputed tomb of Rabbi Shimon Bar Yochai on Thursday to mark the Lag BaOmer holiday and commemorate the second-century Talmudic sage's death.

Most of the victims of the stampede were ultra-Orthodox Jews.

On Friday, the first funerals were held in Jerusalem and the mainly ultra-Orthodox city of Bnei Brak, where men in traditional long black coats lined the streets to mourn.

Sunday has been declared a national day of mourning.

In Tel Aviv's Habima square on Saturday evening, people lit candles at a small vigil to honour the victims.

"Once we have finished identifying and burying our dead, I will stand before the cameras and take responsibility" for the events, Public Security Minister Amir Ohana said Saturday.

"I am responsible but responsibility does not mean blame," he added.

The health ministry said late Friday that 32 bodies had been identified and 22 had been released, adding that identifying some of the bodies may require fingerprinting, DNA and dental testing.

It said the identification process would resume Saturday evening.

The pilgrimage was the largest public gathering in Israel since the Covid-19 pandemic erupted last year.

Israel has fully vaccinated more than half of its 9.3 million population against Covid-19, but restrictions remain on large public gatherings.

Officials had warned overcrowding could lead to a spike in infections, and only authorised 10,000 to attend.