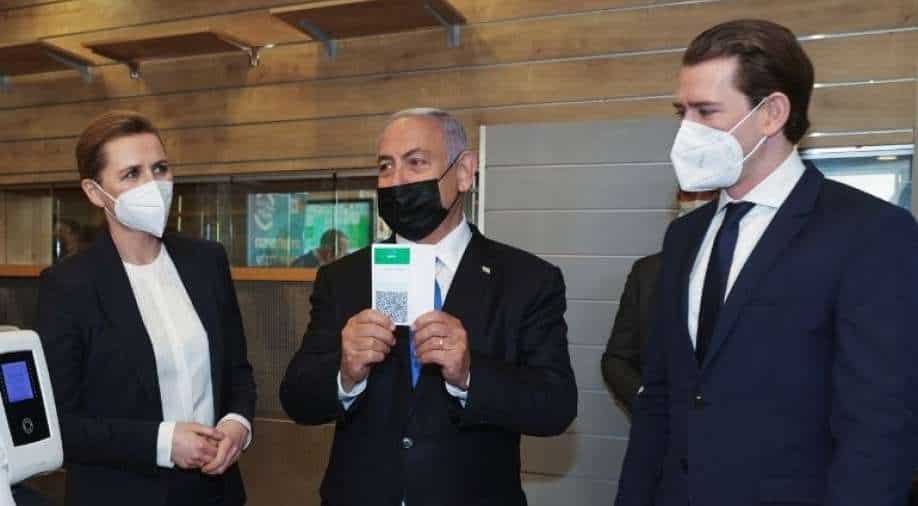 Israeli Prime Minister Benjamin Netanyahu holds up a document, that is part of the "Green Pass" system, which grants certain privileges to citizens who have had both doses of the vaccine against the coronavirus disease (COVID-19) or have recovered from COVID-19, as Austrian Chancellor Sebastian Kurz and Denmark's Prime Minister Mette Frederiksen stand nearby during a visit at a gym to observe the "Green Pass" system, in Modiin, Israel Photograph:( Reuters )

After hosting his Austrian and Danish counterparts for talks and a tour of an Israeli gym open to those documented as having been vaccinated or recovered from COVID-19 with presumed immunity, Prime Minister Benjamin Netanyahu announced the pact

Israel, Austria and Denmark said on Thursday they would set up a joint research and development fund and possibly production facilities for COVID-19 vaccines to ensure they had long-term supplies for booster shots or to contend with virus mutations.

European Union members Austria and Denmark have been chafing at delays in ordering, approving and distributing vaccines within https://www.reuters.com/article/health-coronaviurs-vaccine-europe-int-idUSKBN2AU11Vthe 27-member bloc that have left it trailing far behind Israel's world-beating vaccination campaign.

After hosting his Austrian and Danish counterparts for talks and a tour of an Israeli gym open to those documented as having been vaccinated or recovered from COVID-19 with presumed immunity, Prime Minister Benjamin Netanyahu announced the pact.

"Once we get over this cycle of the disease we have no guarantee that it won't come back. We don't know how long - nobody knows - how long these vaccines will hold up," he said at a joint news conference. "And therefore we have to protect our people against the reemergence of this pandemic or mutations."

Austria's Sebastian Kurz said he was "very happy" about an EU vaccine initiative "but we also need to cooperate worldwide".

The European Commission has said member states were free to strike separate deals should they wish to.

The trilateral pact, Kurz said, would include investment in production plants in Europe and Israel, and each country contributing where it best can to the manufacturing cycle.

"In Austria, for example, lipid production necessary for many vaccines is already taking place," the chancellor said.

Danish Prime Minister Mette Frederiksen said her country was looking to expand its production capacity. "We would like in common also to explore possible cooperation on clinical trials" with Israel and Austria, she said.

Netanyahu, who said 90% of eligible Israelis have either received at least one dose of the Pfizer/BioNTech vaccine or recovered from the virus, has made the programme a showcase of his campaign for a March 23 election.

"We will be, together, 'Vaccination Nations'," he said of the deal with Austria and Denmark. "And we agreed that if other nations want to join us, we will discuss this among ourselves and welcome others to come in as well."