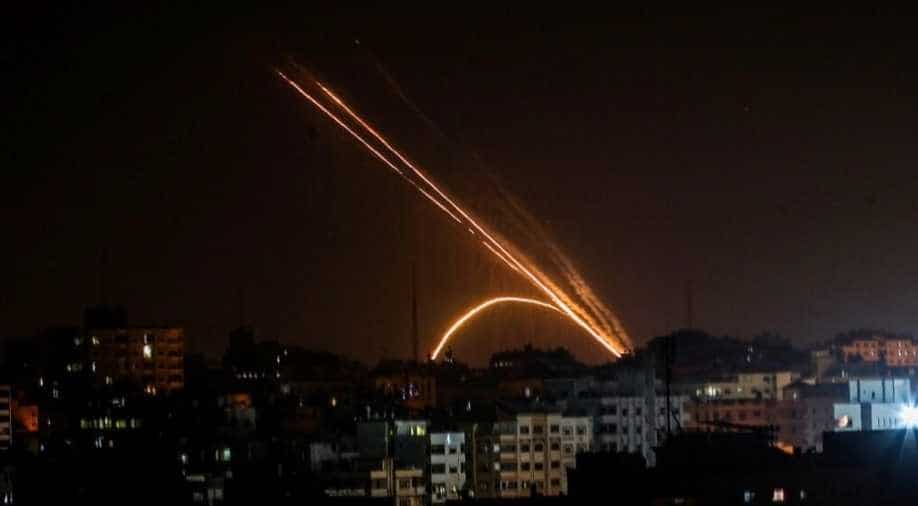 Rockets are fired from the Gaza Strip toward Israel. Photograph:( AFP )

Islamic Jihad said a truce went into effect at 0330 GMT, about 48 hours after Israel triggered the exchange of fire by killing the Iranian-backed faction's top Gaza commander in an airstrike, deeming him an imminent threat.

Palestinian militant group Islamic Jihad and Israel halted hostilities across the Gaza Strip border on Thursday following Egyptian- and U.N.-mediated efforts to end the worst surge in fighting in months.

Islamic Jihad said a truce went into effect at 0330 GMT, about 48 hours after Israel triggered the exchange of fire by killing the Iranian-backed faction's top Gaza commander in an airstrike, deeming him an imminent threat.

Gaza medical officials put the total death toll at 34 Palestinians, almost half of them civilians and including eight children and three women.

On the other side of the Gaza border, hundreds of rocket launches by militants paralysed much of southern Israel, injuring dozens of people.

Hamas, Gaza's dominant faction, appeared to have stayed out of this round of fighting. That may have helped stem escalation.

An Egyptian official contacted by Reuters confirmed a truce had been reached. The Israeli military eased emergency regulations imposed on areas within range of Gaza rockets.

Islamic Jihad said Israel had accepted its demand to stop both the targeted killing of militants and sometimes lethal army gunfire at weekly Palestinian protests on the Gaza border.

"The ceasefire began under Egyptian sponsorship after the Occupation (Israel) submitted to the conditions set by Islamic Jihad on behalf of Palestinian resistance factions," Islamic Jihad spokesman Musab Al-Braim said.

In the deadliest incident of the two-day hostilities, eight members of a Gaza family were killed by an Israeli missile strike shortly before the truce took hold, said medical officials and residents.

They said all were civilians. But Israeli military spokesman Major Avichay Adraee said the head of the family, Rasmi Abu Malhous, who was among the dead, was the commander of Islamic Jihad rocket crews in the central Gaza Strip.

Neighbours left their homes to help rescue workers pull out the bodies of the family, some of which were completely buried in sandy earth. Civilians tried to test the pulse of one body before pulling it out.

Israel's allegation about Rasmi Abu Malhous could not be immediately be confirmed by Reuters. Islamic Jihad did not claim him as a member.

Neither the two days of hostilities nor the sudden cessation shifted the dynamics of the underlying core conflict.

While Hamas has been open to long-term ceasefires, like Islamic Jihad it refuses to accept permanent coexistence with Israel.

Gazans are seeking to end years of an Israeli-led blockade. Refugees from the 1948 war of Israel's founding and their descendents make up most of the two million Palestinians in Gaza and are seeking the right to return to their former lands.

Israel rejects this as demographic suicide and sees no means of making peace as long as Hamas and Islamic Jihad are armed.

Katz said there would be no change to Israeli military policy in Gaza, contradicting the assertion of Islamic Jihad.

Targeted killings "will not cease", he said, and "the open-fire policy for which the Israel Defence Forces is responsible (at the Gaza border) will not change".

Gaza was mostly quiet at daybreak, with the exception of a lone rocket launch witnessed by a Reuters correspondent and the sounding of sirens in some outlying Israeli towns.

Markets in Gaza reopened as life returned to normal, though people expressed mixed feelings about the truce.

"We responded and made clear our blood was not shed in vain. Also, a truce is good because we don't want our people to suffer more under the blockade," said one resident, Mohammad Al-Smairi.

UN mediator Nickolay Mladenov said the Gaza situation remained fragile, tweeting: "All must show maximum restraint and do their part to prevent bloodshed. The Middle East does not need more wars."