Is the pay wall coming? Wikipedia makes 'humble' plea to users to pay to 'defend independence' The company has put up various price bands of Rs 150 to Rs 5,000 which readers can volunteer to give through online payment

It may be the sign of the times! The last free bastion in the online world may be falling to the paywall.

Also Read: Wikipedia turns 15 - How it changed our lives & the world

Wikipedia, the online encyclopedia today made a "humble" plea to its readers asking for money in a bid to raise funds. 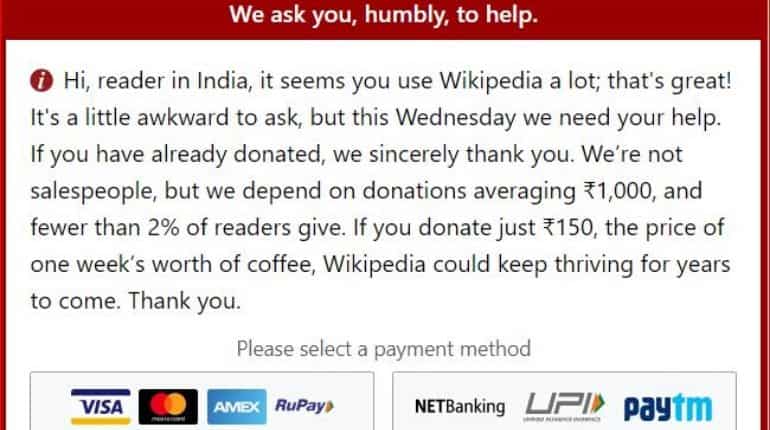 It said on its site: "We depend on donations averaging about ₹1,000, but 98% of our readers don’t give. If everyone reading this gave ₹150, the price of a box of tea, we could keep Wikipedia thriving for years to come."

The site which depends on volunteers to write & edit with its open editing system said that being a non-profit organization "people warned us we'd regret it. But if Wikipedia became commercial, it would be a great loss to the world."

"It's a little awkward, so we'll get straight to the point: This Wednesday we humbly ask you to defend Wikipedia's independence."

The board on top of its page clearly stated that the site runs due to "a community of people" working to bring unlimited access to reliable, neutral information.  "We ask you, humbly, to help," it said.

Although it is still a "plea" to readers but it came as surprise to many with the site coming openly "straight to the point".

The company has put up various price bands of Rs 150 to Rs 5,000 which readers can volunteer to give through online payment, with an "other" button in which a user can give an unspecified amount.

"When we made Wikipedia a non-profit, people warned us we'd regret it. But if Wikipedia became commercial, it would be a great loss to the world. Wikipedia unites all of us who love knowledge: contributors, readers, and the donors who keep us thriving," it said.

The site which was founded in 2001 has grown to become a pillar of the free economy on the Internet with millions who depend on it each day. It publishes content in several languages including Catalan, Swedish, German, French, Portuguese among several others.

It also hosts its content on the mobile app and has free online courses, travel guides, speech directories among other documents which keeps users hooked to the site for hours.