Is Margaret Thatcher’s hometown ready to put her on a pedestal? 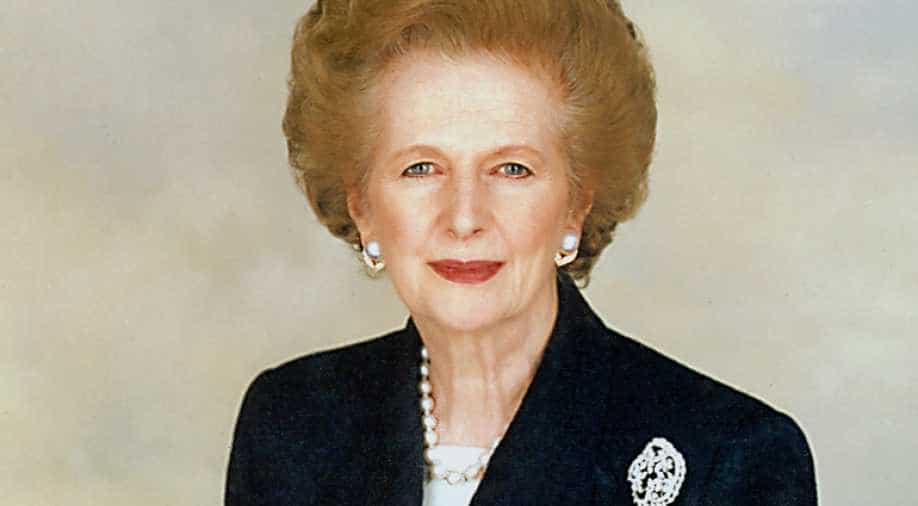 The then prime minister was drawn into the scheme in January 1981, the same month that Reagan was inaugurated, when the Smithsonian Institution in Washington appealed to London Zoo for the loan of its male panda. Photograph:( Others )

Some see her as the leader of a much-needed political and economic revolution, privatizing industry, facing down trade unions and winning victory for Britain against Argentina in the Falklands War

Statues of the politically unpalatable have this year been toppled, beheaded and graffitied from the American South to Belgium, and Britain to New Zealand. Not even Winston Churchill was spared.

In the English town of Grantham, an hour’s train ride north of London, an 11-foot pedestal now stands empty. That’s not because the statue atop it has been vandalized — though many expect it will be once it is finally installed.

Next year, that plinth is to become the base of a stern-looking, larger-than-life bronze monument to Grantham’s most famous daughter: Margaret Thatcher.

If Thatcher — the “Iron Lady” who was the first female prime minister of Britain — is currently getting a sympathetic portrayal from Gillian Anderson on Netflix’s “The Crown,” she remains a divisive and polarizing figure three decades after leaving office.

That’s true even in her hometown. So while the unveiling of a statue is usually a festive occasion, few in Grantham expect Thatcher’s homecoming to be celebrated as a hero’s return.

“If you’re a Conservative,” said Graham Newton, the news editor of the weekly Grantham Journal, “you want a statue, and you want her recognized. But if you’re not, there’s a lot of people who — not to put a fine point on it — hated her.”

Many in Grantham expect her critics will not wait long to make their mark, Newton added. “Either way, it’ll make a good story for the paper,” he said.

Culture wars have been roiling around statues since 2017, when officials in Charlottesville, Virginia, said they would remove a statue memorializing Robert E. Lee, the Confederacy’s top general. But voices calling for the removal of statues associated with slavery and colonialism have grown steadily louder this year, particularly since the killing of George Floyd and the resurgent Black Lives Matter movement.

In England, some have taken matters into their own hands. A monument to Edward Colston, a 17th-century slave trader, was toppled in Bristol in June during a Black Lives Matter protest.

That same month, a protester in London scrawled “racist” on a statue of Winston Churchill, an ardent imperialist who once said it was right for “a stronger race, a higher-grade race” to claim territory from another. (He is also widely regarded as Britain’s greatest prime minister for his leadership in World War II.) The statue was boarded up to prevent further damage, and Prime Minister Boris Johnson said on Twitter that it was “absurd and shameful” that Churchill’s statue was at risk of attack.

As in the United States, where a statue of Abraham Lincoln was considered fair game for protesters in Portland, Oregon, a wide range of monuments now seems more vulnerable to attack. And while it is unusual for a statue of a woman — a rarity itself — to attract such strong emotions, this was always the way with Thatcher.

Internationally, Thatcher, who died in 2013 at age 87, may be seen as a political colossus, the British equivalent of Ronald Reagan. But in Britain, her 11 years in power have a more complicated legacy.

Some see her as the leader of a much-needed political and economic revolution, privatizing industry, facing down trade unions and winning victory for Britain against Argentina in the Falklands War. To others, she is someone who, coldly, left towns that were dependent on state-run industries to rot and turned Britain into a society of uncaring individuals.

Perhaps that’s why Thatcher’s presence in Grantham is currently so low-key. She grew up above the grocery store her father ran, and there is a small plaque on the building today — although the store itself is now a center for “chiropractic natural therapies,” beauty and massage treatments. The town’s museum features a few exhibits, including her childhood bed and one of her suits, though none of her trademark handbags are on display.

The new monument, designed by sculptor Douglas Jennings, won’t be Britain’s first to Thatcher, but it will be the first outdoors, in easy reach of vandals.

The Grantham statue was initially proposed for Parliament Square in London, putting Thatcher in the company of Abraham Lincoln, Nelson Mandela and the Churchill statue that was boarded up this summer.

But officials rejected it twice for a variety of reasons, including a rule that people honored with statues must have been dead for a decade, “to allow partisan passions to cool and enable sober reflection.”

The monument is now in storage at a secret location, said Ivan Saxton, the founder of the Public Memorials Appeal, a nonprofit that raised the money to erect it.

The plinth was installed in Grantham in February, and the statue was meant to join it in May, Saxton said, but the coronavirus pandemic scuppered those plans. The unveiling ceremony will now be postponed until social distancing is no longer required, he added, so the event could have a sense of pageantry, complete with local dignitaries and a military band.

For many, such pomp couldn’t be more inappropriate. In a telephone interview, Charmaine Morgan, a Labour Party councilor in Grantham, said that Thatcher “represents a period in our history when inequality was prevalent, and many of her policies led to a significant increase in it that is only continuing to grow.”

She said she wouldn’t mind if the statue were in the town’s museum — she just doesn’t want it in public.

Charles Moore, a former editor of The Daily Telegraph newspaper, who wrote an authorized biography of Thatcher, said such objections were the views of a minority. “It’s obvious there should be statues to Britain’s first woman prime minister, and I think they would be accepted by most people in Britain,” he said.

Moore added that while “divisive” was the first word most British journalists used to describe her, he preferred “successful.”

“She won every election she fought,” he said. “She won big majorities. And this made some of her critics very, very angry.” Her success is what made her divisive, he said.

The authorities in Grantham considered extra measures to stop the statue from being vandalized, said Rosemary Kaberry-Brown, a Conservative local councilor. “I still think it should be in the middle of a fish pond, so anyone who wanted to vandalize it has a hard job,” she said.

But last week, the plinth seemed far from a fortress. Two local government employees stood by it, discussing a plan to install flower beds.

In interviews with 20 Grantham residents, more were in favor of the statue than against.

Joan McDaniel, 82, said she had mixed views on Thatcher as a politician, but added that she deserved a monument, even if it could “attract idiots” who might vandalize it.

“It looks just like Maggie — the fierceness of her,” McDaniel said.

Many said it would be good for at least one thing: tourism.

“No one talks about Grantham” said Sarah Gibson, 46, a cafe owner. “At least this will get them.”