Is it a wakeup call? Wildfires, hurricanes become a regular misery 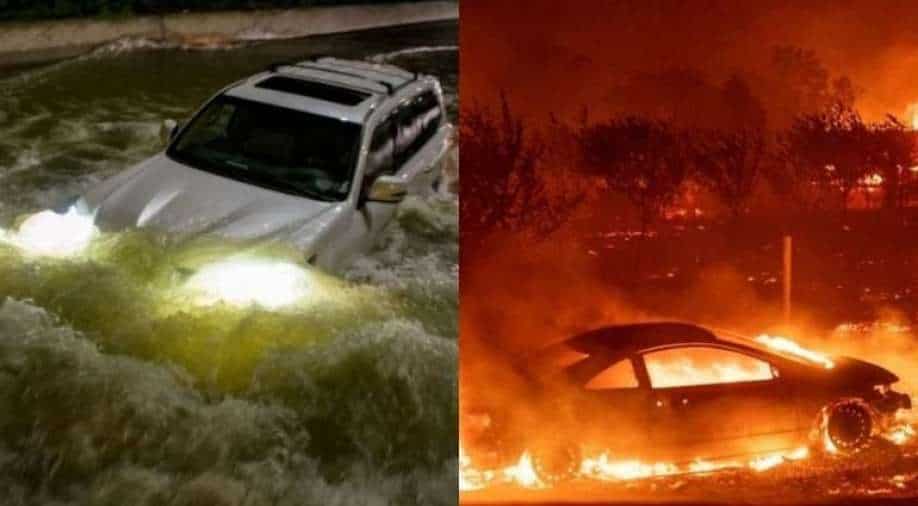 Hurricanes and wildfires wreak havoc on world. Photograph:( Others )

Climate change is taking a heavy toll on the world as it has led to a spate of natural horrors. From hurricanes to wildfires, there have been several natural calamities one after the other. Several hurricanes like Olaf, Ida, Elsa, Iota, etc have recently battered the world. In the aftermath, several people have lost their lives

Climate change is real. The sooner world realises, the better.

Lately, climate change has led to a spate of natural horrors around the world.

From hurricanes to wildfires, there seems to be no pause in the occurrence of the natural calamities in some regions of the world.

Several hurricanes like Olaf, Ida, Elsa, Iota, etc have recently battered the world, while Larry, Nicholas, etc are on the job at the time of publishing of this article.

One can understand the situation by this fact that Nicholas is the 14th named storm of the 2021 Atlantic hurricane season.

Life-threatening flash floods caused by these storms have led to the death of numerous people while several homes have also been lost. Long power outages, disruption in numerous other services are common at this time.

Describing the uncomfortable situation what comes during a storm, Texas Governor Greg Abbott  said, "Listen to local weather alerts and heed local advisories about the right and safe thing to do, and you'll make it through this storm just like you've had many other storms." He gave this advice recently to people, who are going to witness the wrath of the Hurricane Nicholas.

As if this was not enough, several wildfires in Greece, Spain, US, Australia, etc have also forced many people to flee their homes or breathe their last.

Now, the scientists are also looking to name heatwaves as is the case in hurricanes as it has become a common phenomenon, which needs attention and understanding.

Not just for humans, these calamities have also taken a huge toll on wildlife. Several animals have either lost lives or habitat or move towards extinction.

But what is this actually. Is it a bomb ticking towards a huge explosion? Or Is it just a false alarm?

It is high time to ascertain it as it may be too late soon.

Although numerous companies are looking to explore other planets or come up with space travel for leisure, it also seems to be utmost important to save earth before it bids the final goodbye.