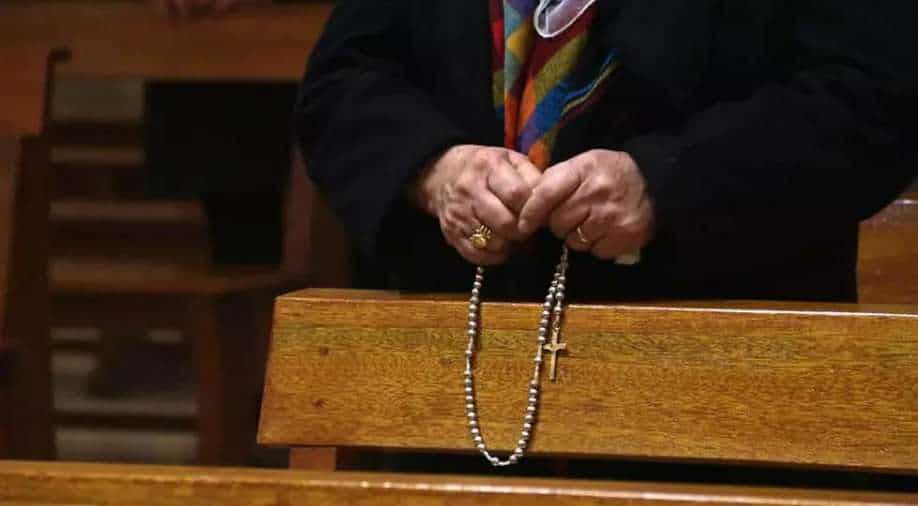 After first settling in the fertile plains of Nineveh province before heading for the busy boulevards of Baghdad, more than one million Christians have in more modern times been uprooted by Iraq's consecutive conflicts.

Some fled after the US-led invasion, others during sectarian bloodshed and more following jihadist attacks. Iraq's last two violent decades have hollowed out its Christian community which dates back two millennia.

After first settling in the fertile plains of Nineveh province before heading for the busy boulevards of Baghdad, more than one million Christians have in more modern times been uprooted by Iraq's consecutive conflicts.

"By the age of 24, I had already lived through and survived three wars," said Sally Fawzi, an Iraqi Chaldean Catholic, who left her country more than a decade ago and is now living in the US state of Texas.

Some members of Iraq's historic Christian community escaped to the nearby autonomous Kurdish region, others waited in neighbouring Jordan to emigrate and then resettled in countries as far away as Australia.

Many lost hope in their homeland long ago, but see next month's scheduled visit by Pope Francis -- the first-ever papal trip to Iraq -- as an important opportunity for him to use his voice to garner international support for Iraqis of their faith.

Iraq's Christian community is one of the oldest and most diverse in the world, featuring Chaldean, Armenian Orthodox, Protestant as well as other branches of Christianity.

By 2003, when then-dictator Saddam Hussein was toppled, there were 1.5 million Christians in a country of 25 million people, or around six percent of the population.

But as Iraq's population mushroomed, the percentage of the minorities shrank.

Among those who left, nearly half a million resettled in the United States. Others ended up dispersed in Canada, Australia, Norway and other parts of Europe.

Rana Said, 40, had tried her hardest to stay.

Her aunt and uncle were killed in 2007, when US soldiers blindly opened fire on the streets of Mosul after an attack in the regional capital of the northern province of Nineveh.

Still, she remained in the city with her husband Ammar al-Kass, 41, a veterinarian.

The following year, with Iraq gripped by sectarian bloodletting, a string of assassinations, including of Christians, pushed the Kass family to move to the relative safety of Iraqi Kurdistan.

But by 2013, the region was growing increasingly unstable.

The couple finally left their ancestral Iraq and were resettled on the Gold Coast of Australia where they found jobs in their respective professions and have raised three daughters: Sara, 10, Liza, six, and three-year-old Rose.

The young girls have never visited Iraq, although they speak Arabic and a modern dialect of Assyrian -- the ancient language of Christ -- at home.

A year after they resettled, jihadists from the so-called Islamic State group swept through their city. The family watched in horror from halfway around the world.

"The fall of Mosul wasn't easy for us," Ammar recounted, particularly IS's destruction of the city's Church of the Virgin Mary, a 1,200-year-old piece of treasured heritage.

"That's where my father was married. It was razed and obliterated to the ground," he said.

He tried to keep his wife -- pregnant with Liza at the time -- away from computers and phones, afraid the added stress would harm the baby.

"I used to have nightmares about IS entering and killing and raping my family. It was a repetitive, horrible dream," Rana said emotionally, of the jihadists who forced women of the Yazidi religious minority and those of other minorities into sexual slavery.

Saad Hormuz lived the IS nightmare in person.

On August 6, 2014, IS fighters swept into Bartalla, the diverse town on the edges of Mosul where Hormuz had worked as a taxi driver.

"First, we fled towards Al-Qosh," another Christian town further north, he told AFP.

But as the jihadists kept up their pillaging of Nineveh, they escaped to Arbil, the capital of the Kurdish region.

That severely strained their finances.

Three years later, Iraq's military declared it had freed Bartalla from IS's grip. The Hormuz family was elated and rushed back to resume life in their hometown.

But they found their home had been torched and ransacked, and that members of the Hashed al-Shaabi, a powerful state-sponsored paramilitary network formed from mostly-Shiite armed groups and volunteers to fight IS, now controlled Bartalla.

"We lived in fear. There were checkpoints and militias everywhere. Once, they even asked my wife to wear a veil," said Hormuz.

"So I decided to sell everything, even my car, and move to Jordan," he told AFP.

They have lived in a two-bedroom apartment in Amman since February 2018, hoping to be resettled permanently in Canada, where he and his wife have family connections.

With Covid-19 slowing down all international travel, the immigration process has been indefinitely frozen as their savings dwindle further.

Registered as a refugee in Jordan, Hormuz does not have the right to work legally and relies on soup kitchens at Amman's few churches to keep his family fed.

"I hope that through his visit to Iraq, the pope will ask countries receiving Christian refugees to help us," he said.

"Going back to Iraq is out of the question."

Born in Baghdad, Hanna, 40, was sent in 2017 to lead Europe's largest Chaldean congregation of around 25,000 people, who had arrived in Sweden in waves over the past four decades.

He lived through much of the violence they had fled, describing it as "great chaos."

In 2006, he was kidnapped after presiding over mass in the Iraqi capital.

"I was held and went through lots of experiences -- including torture and isolation," Hanna told AFP.

"This experience also gave me strength, truth be told. I was born again. I look at life again with a great blessing and a great love," he said.

There are more than 140,000 Iraqi-born residents in Sweden, including Raghid Benna, a native of Mosul who resettled in the eastern town of Sodertalje in 2007.

"There are so many Chaldeans here that I don't even feel like I'm in exile," said Benna, a father of two.

For Sally Fawzi, 38, who was resettled in the US as a refugee in 2008, memories of home can be painful.

"My family was devastated in 2007 when we learned that my two great aunts in Kirkuk had been stabbed to death at night in their home just because they were Christians," she told AFP.

"Today, I have a house, a beautiful family of my own, a job, and my immediate family live in the same city, but I miss my Baghdad house and friends the most," Fawzi said.

"It will never be the same."

From bloodshed to bankruptcy

As young families escape Iraq, they often leave their older relatives behind, said Warda of the Hammurabi Human Rights Organisation.

"A Christian family was typically five members. Now it's down to three," he said.

In Baghdad, the once-thriving community of 750,000 Christians has shrunk by 90 percent.

Among them is Younan al-Farid, a priest who has stayed on in the capital even after his brother emigrated to Canada and his sister to the United States.

With fewer worshippers, "up to 30 percent of Iraq's churches closed," Farid told AFP.

But that hasn't stopped the flight of minorities.

"People are still leaving. Christians are just trying to save up enough money, and then as soon as they can, they emigrate," said Farid.

The country's parlous economy is the main driver of emigration now, Christians across the country told AFP.

The pandemic triggered a worldwide recession, and Iraq faced the additional challenge of collapsing oil prices, which slashed state revenues from crude sales.

That has led to delays or cuts in public sector salaries in federal Iraq as well as the autonomous Kurdish region, where many Christians still live.

"I only receive one salary every two months, and sometimes not even the full salary," lamented Haval Emmanuel, a Chaldean government worker originally from northern Iraq.

"As soon as I get paid, I have to pay debts from the preceding weeks and then I have nothing left."

Emmanuel grew up in Iraq's southernmost city of Basra, then married and lived in Baghdad until 2004, when a bomb detonated outside the school his children attended.

Now grown, one of his daughters has emigrated to Norway with her husband, and his brother and sister have each moved their families to Lebanon.

Emmanuel, his wife and their three other children are eking out a living in Arbil as they await a response for their own resettlement requests.

"We're suffocating: there's no social care, no health services, no public schools, no work," he told AFP at his modest home near Arbil's Chaldean Archdiocese.

It irked him to see the lack of public services in oil-rich Basra, piles of rubbish disfiguring Baghdad's historic Rasheed Street, or posters of late Iranian supreme leader Ruhollah Khomeini in squares and streets in southern Iraq.

"It's supposed to be a public place, but it makes me feel like I have no place here," said Emmanuel.

"If they open everything up, I guarantee that by tomorrow, there won't be any Christians left. At least abroad, we will finally feel respected as humans."

The economic downturn, the poor quality of life, the shrinking space for minorities -- Emmanuel blamed it all on an entrenched political class seen as deeply corrupt.

And there's little the pope can do to change that.

"The pope is like an angel coming down on Iraq, but how many demons will he find here? A man of peace visiting a group of warlords -- how could he change them?" he said.

Emmanuel, whose daughter will sing in the choir that is set to welcome Pope Francis when he arrives in Arbil, broke into a bitter smile.

"We're expecting the pope. But we're not expecting much from his visit."