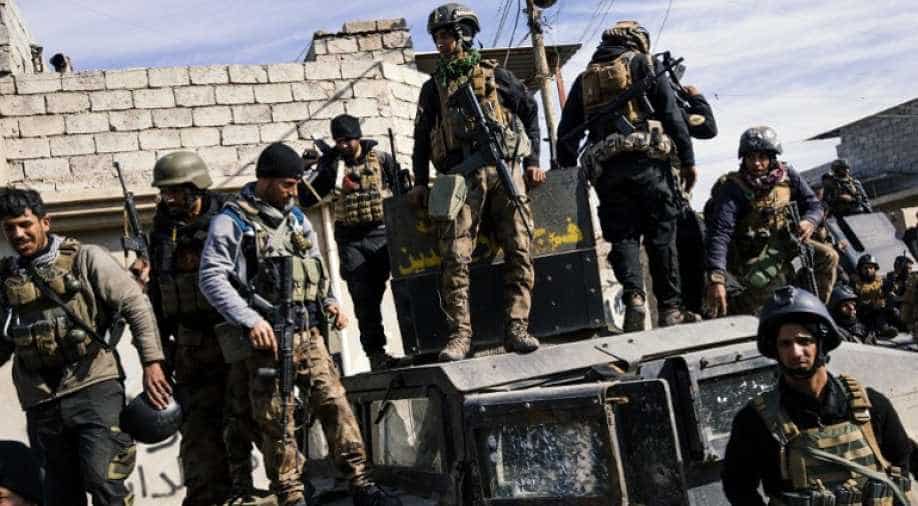 The Counter-Terrorism Service (CTS) had taken control of the eastern bank of the Tigris river, which bisects the city from north to south, Lieutenant General Talib Shaghati told reporters in Mosul. Photograph:( AFP )

Lieutenant General Talib Shaghati, top commander of Iraq Counter Terrorism Forces (ICTF), declared that his troops have reclaimed the eastern part of Mosul, the last stronghold of the Islamic State in Iraq.

According to the ICTS, as many as 3,300 terrorists were killed in the city during the whole offensive.

The news comes a day after counter-terrorism forces flushed out the militants from Mosul University, the main operative base and an arms factory of the terrorist organisation in the eastern part of the city.

Now that all the eastern part of the city is under government control, the Iraqi Army will have the upper hand in their quest to launch the last phase of the offensive.

Troops had already taken control of the areas on the left side of the Tigris river, which runs through the city north to south.

The Islamic State is now 'trapped' in the western side of Mosul as the eastern half has now been swamped by Iraqi forces and the rim of the western part of the town is controlled by Shia militants.

However, absolute control of the city remains fraught with danger as international monitoring agencies remain unclear about the number of Islamist militants holed up in the west of Mosul.

Iraqi security forces on December 30, 2016 began the second phase of their offensive against Islamic State militants in Mosul, pushing from three directions into eastern districts where the battle had been deadlocked for nearly a month.

More than 5,000 soldiers and federal police troops, redeployed from Mosul's southern outskirts, entered half a dozen southeastern districts, while counter-terrorism forces advanced in al-Quds and Karama districts after reinforcements arrived.

The battle for Mosul involves 100,000 Iraqi troops, members of the Kurdish security forces and Shi'ite militiamen.