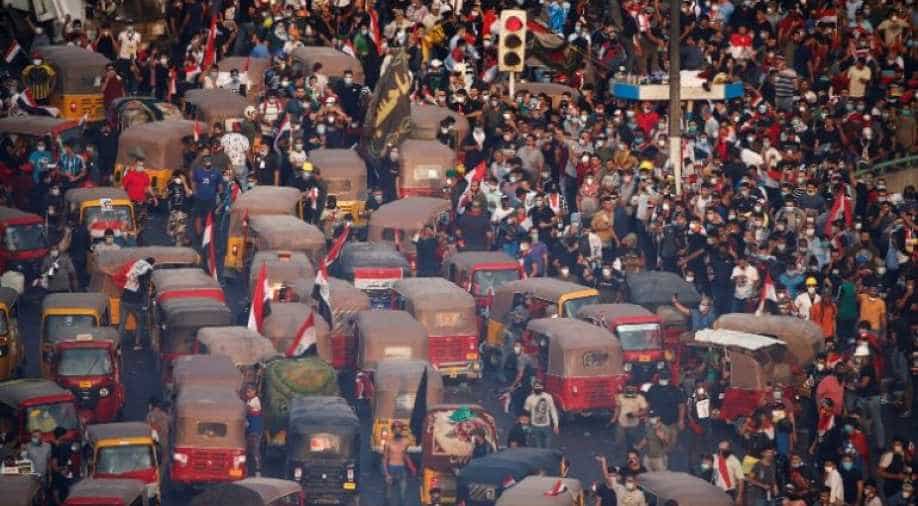 Demonstrators and tuk-tuk drivers take part in a protest over corruption, lack of jobs, and poor services, in Baghdad, Iraq October 28, 2019. Photograph:( Reuters )

At least 865 people were wounded, the sources said. Three protesters died in the southern city of Nassiriya from wounds sustained in earlier protests.

Iraqi security forces killed at least 14 people in the Shi'ite holy city of Kerbala overnight after opening fire on protesters, medical and security sources said, in a return to tactics denounced by the government's own internal inquiry.

At least 865 people were wounded, the sources said. Three protesters died in the southern city of Nassiriya from wounds sustained in earlier protests.

Kerbala's health department chief, however, said 122 people were injured, including 66 members of the security forces.

Kerbala's police chief denied in a statement that any protesters had been killed and said only one person had died in an unrelated criminal incident, calling footage of security forces shooting at protesters that went viral on social media fabricated and designed to "incite the street" in the city.

Thousands of Iraqis took to the streets this week in the second wave of protests against Prime Minister Adel Abdul Mahdi's government and a political elite they say are corrupt and out of touch. The total death toll since the unrest started on October 1 is now at least 250 people.

The unrest, driven by discontent over economic hardship and deep-seated corruption, has broken nearly two years of relative stability in Iraq, which from 2003 to 2017 endured a foreign occupation, civil war and an Islamic State insurgency.

OPEC member Iraq boasts vast oil wealth, but many Iraqis live in poverty or have limited access to clean water, electricity, basic health care and education. The country is still struggling to recover from years of conflict since 2003.

Many Iraqis blame a political elite they say is subservient to one or another of Baghdad's two main allies, the United States and Iran. They say these powers use Iraq as a proxy to pursue their struggle for regional influence, without concern for the needs of ordinary people.

Despite promising reforms and ordering a broad reshuffle of the cabinet, Abdul Mahdi, whose position is increasingly precarious in the face of the stiffest challenge since he took office a year ago, has so far struggled to address the demonstrators' complaints.

A Reuters correspondent saw a convoy of anti-riot police driving towards Baghdad's central Tahrir Square on Tuesday where protesters, now joined by students, gathered for a fifth day.

A spokesman for Abdul Mahdi said on Sunday that anyone disrupting work or school days would be severely punished.

"They threatened us with our jobs, said they would cut our salaries off if we came, they can keep the salaries! Why all this blood? Why have all these young men lost their lives," said a teacher in Tahrir Square who declined to give her name.

An Iraqi government committee investigating the first wave of unrest, which took place during the first week of October, found that 149 civilians were killed because security forces used excessive force and live fire to quell protests.

Its report, which said more than 70 per cent of the deaths were caused by shots to the head or chest, held senior commanders responsible but stopped short of blaming the prime minister and other top officials, saying there had been no order to shoot.

Protests stopped for two weeks before resuming on October 25.

Security forces fired tear gas on Monday at school and university students who defied a warning from Abdul Mahdi and joined thousands in Baghdad protesting against his government.

Soldiers were seen beating high school students with batons in two Baghdad districts. A Defence Ministry statement condemned the incident and said the soldiers did not represent the Iraqi army as a whole. It did not say if they would be punished.