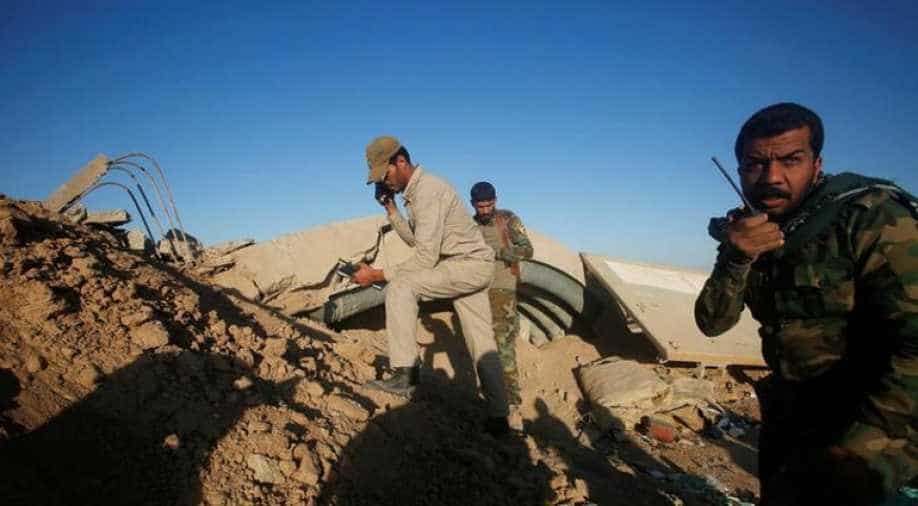 Shi'ite Badr Organisation fighters take cover behind a berm during a battle with IS militants at the Tal Afar airport west of Mosul on November 20. Photograph:( Reuters )

Iraqi Shi'ite militias were massing troops on Monday to cut remaining supply routes to Mosul, Islamic State's last major stronghold in Iraq, closing in on the road that links the Syrian and Iraqi parts of its self-declared "Caliphate".

Six weeks into the US-backed offensive on Mosul, Islamic State is fighting in the area of Tal Afar, 60 km (40 miles) to the west, against a coalition of Iranian-backed groups known as Popular Mobilisation.

Cutting the western road to Tal Afar would seal off Mosul as the city is already surrounded to the north, south and east by Iraqi government and Kurdish Peshmerga forces.

The government's US-trained Counter Terrorism Service unit breached Islamic State's defences at the end of October and is fighting to expand a foothold it gained on the eastern side of Mosul.

The road to Tal Afar is no longer safe, said a truck driver who used it two days ago to bring in fruit and vegetables from Raqqa, Islamic State's Syrian stronghold.

He said he saw three trucks burning on the road while fighting raged in the vicinity. "This is the last time I drive on this road, it will be cut," he told Reuters by telephone, asking not to be identified as the insurgents punish by death those caught communicating with the outside world.

A Popular Mobilisation spokesman said over the weekend that its forces were already advancing to the main highway as part of operations to seal off Mosul. A Reuters reporter said they were massing troops to finish encircling Tal Afar.

The Iraqi air force supporting Popular Mobilisation in their fight near Tal Afar carried out airstrikes that killed 15 insurgents, including a group that was hiding in a tunnel near Tal Afar airbase, according to a military statement published Sunday evening.

The campaign to capture Mosul started on October 17, with air and ground support from a US-led coalition. Popular Mobilisation joined the offensive at the end of October, attacking Tal Afar and capturing the airbase just south of the town on November 16.

The offensive on Tal Afar could draw in Turkey, which fears Iran's taking over a town mainly populated by ethnic Turkmen, Sunnis and Shi'ites, and which lies close to the Syrian and Turkish borders.

Turkish President Tayyip Erdogan has said Ankara will respond if the militias "cause terror" in Tal Afar.

Iraqi Prime Minister Haider al-Abadi tried to allay fears of ethnic and sectarian killings in Tal Afar, saying any force sent to recapture it would reflect the city's diversity.

The Mosul campaign is turning into the biggest battle in Iraq since the US-led invasion that toppled Saddam Hussein in 2003.

Iraqi military estimates put the number of insurgents in Mosul at 5,000 to 6,000, facing a 100,000-strong coalition of Iraqi government units, Peshmerga fighters and Shi'ite militias.

A Mosul resident said airstrikes have intensified on the western part of the city, which is divided by the Tigris river running through its centre. The strikes seemed to be targeting an industrial area, he said.

The militants are dug in among more than a million civilians as a defence tactic to hamper the strikes. They are moving around the city through tunnels, driving suicide car bombs into advancing troops and hitting them with sniper and mortar fire.

The Iraqi authorities did not release an overall estimate of the casualties but the United Nations warned on Saturday that growing numbers of injured civilians and military are overwhelming the capacity of the government and international aid groups.

Nearly 200 wounded civilians and military personnel were transferred to hospitals last week, the highest level since the campaign to push the jihadists out, said Lise Grande, the UN humanitarian coordinator for Iraq.

The proportion of civilians among the wounded also appears to rising, reaching 20 per cent in the first month of the offensive, according to a Department of Health official, although part of the increase is likely due to improved access to areas newly retaken from Islamic State.