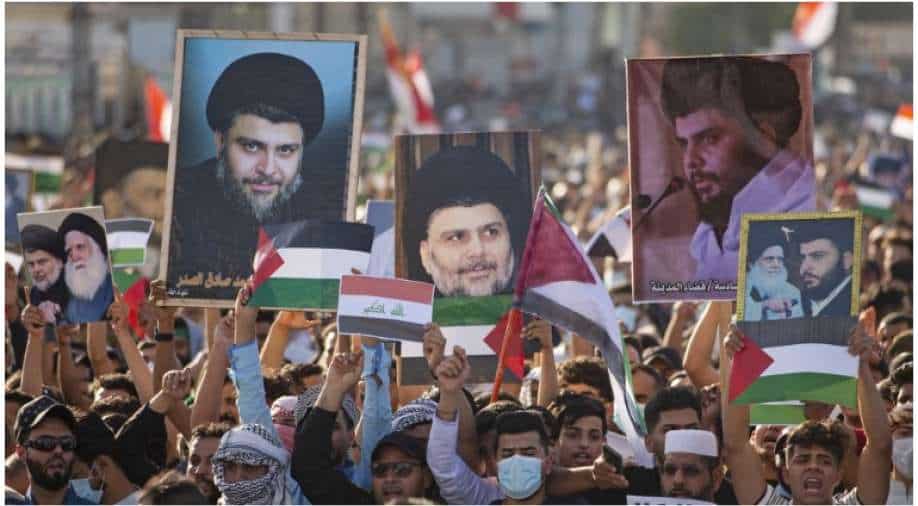 Supporters of Iraqi Shiite cleric Muqtada al-Sadr gather in solidarity with the Palestinians, in the southern Iraqi city of Basra on May 15, 2021. Photograph:(AFP)
Follow Us

The rally in Baghdad came as Israel pounded the Gaza Strip on Saturday with airstrikes, killing 10 members of an extended family and flattening a tower that housed media offices of Al Jazeera and The Associated Press

Thousands of supporters of hardline Shiite cleric Moqtada Sadr rallied in Baghdad on Saturday to denounce Israeli attacks on Palestinians.

"Jerusalem is ours. Death to Israel," read signs they held up as they flooded Baghdad's iconic Tahrir Square, holding a huge Palestinian flag above their heads.

"The world is against Palestine but God backs it," read another sign carried by the protesters who also waved the Iraqi flag and held pictures of Sadr.

The rally in Baghdad came as Israel pounded the Gaza Strip on Saturday with airstrikes, killing 10 members of an extended family and flattening a tower that housed media offices of Al Jazeera and The Associated Press.

That coincided with clashes in the West Bank as Palestinians marked the Nakba, or "catastrophe" when more than 700,000 of them were expelled or fled from their land during the 1947-1948 conflict surrounding the creation of Israel.

"We stand with the Palestinian people for better or worse," Sadr said in a statement delivered by his Baghdad representative Sheikh Ibrahim al-Jabari.

"Israel is trying, by every means possible, to reconcile with Arabs and Muslims through the normalisation of ties with countries who are only guided by economic and financial interests," Sadr's message said.

He was alluding to the US-brokered normalisation agreements Israel struck last year with the United Arab Emirates, Bahrain, Sudan and Morocco.

Experts said Saturday's rally was a show of force by Sadr supporters ahead of early parliamentary elections expected to take place in October.