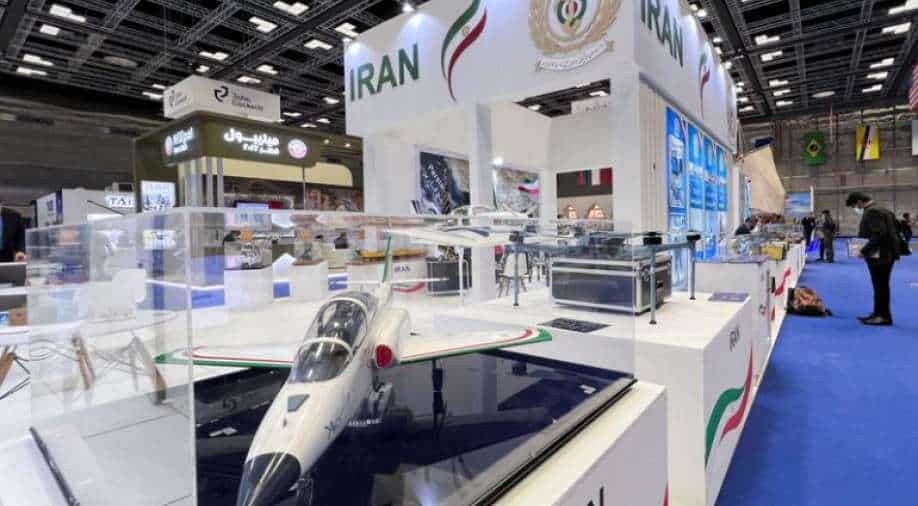 In a booth adjacent to Iran's, U.S. firm General Atomics showcased its MQ-9B predator drone, which is engineered to conduct anti-surface warfare, including maritime surveillance and precision-guided munitions. Photograph:( Reuters )

Commanders of Iran's elite Islamic Revolutionary Guard Corps (IRGC) drank tea, nibbled dates and displayed models of Iranian missiles at a defence show in Qatar, a Gulf Arab state that is home to the largest U.S. military base in the region.

Their presence was striking when other Sunni Muslim Gulf states and Israel are alarmed at the prospect of the United States removing its terrorist designation of the IRGC as part of efforts to revive a nuclear pact with Iran.

The Iran booth was organised by Iran's Ministry of Defence and the commanders were part of a broader Iranian delegation.

A Qatari official said in a statement to Reuters on Thursday no invitation had been sent to the IRGC.

"The participation in the event and pavilion was by the Iranian Ministry of Defence and there were no invitations sent to Iran’s Revolutionary Guard."

"We reject the presence of Iran at a maritime defence exhibit, considering that it’s Iran that single-handedly is threatening maritime stability throughout the Gulf region," U.S. State Department spokesperson Ned Price said in a statement.

The IRGC, which answers directly to Iran's supreme leader, has expanded in the region via Shi'ite Muslim proxies including in Yemen, where the Houthi movement last weekend launched a barrage of strikes on Saudi oil facilities.

Riyadh accuses Iran of arming the Houthis and has blamed Tehran for a 2019 assault on Saudi Arabia's energy heartland and tanker attacks in Gulf waters. Iran denies the charges.

Washington is reportedly considering removing the IRGC from a terrorist organisation blacklist in return for Iranian assurances about reining in the elite force, which controls a business empire. Sources say this is among the last issues in indirect talks to revive the 2015 nuclear pact.

IRGC officials at the Doha defence show, from March 21-23, declined to speak to Reuters. While some huddled in meetings at the booth, which featured a giant poster of a fast boat filled with commandos, others explored the trade floor.

In a booth adjacent to Iran's, U.S. firm General Atomics showcased its MQ-9B predator drone, which is engineered to conduct anti-surface warfare, including maritime surveillance and precision-guided munitions.

The U.S. State Department has authorised the company to sell 18 of the unmanned aircraft to the United Arab Emirates in a deal worth as much as $2.9 billion.

Qatar has good ties with Iran, with which it shares a giant gas field. In contrast, Qatar's neighbour Saudi Arabia is locked in several proxy conflicts with Tehran in a struggle for regional dominance.