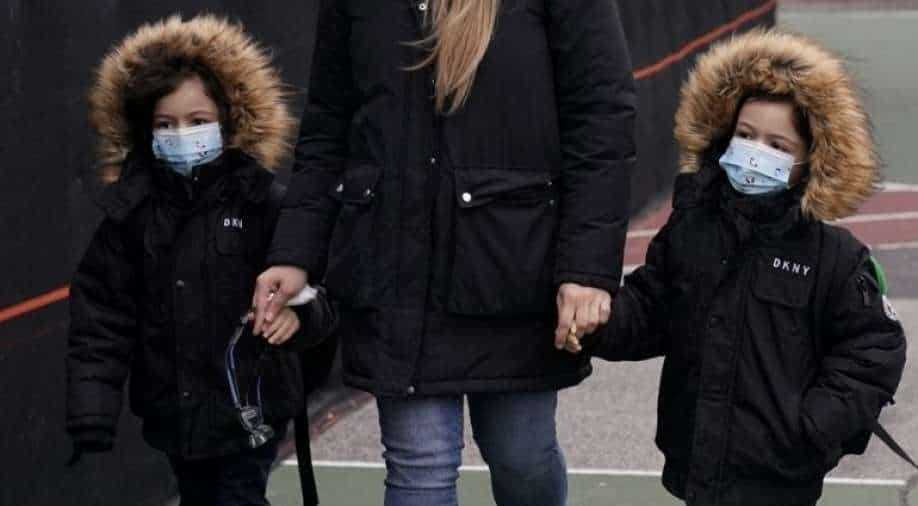 Students with their parents arrive at Concourse Village Elementary School amid the recent spike in Covid-19 cases in the Bronx, New York Photograph:( AFP )

A mother in rural Wisconsin said she felt “utterly helpless” as she sent her 13-year-old off to school. Another, in suburban New Jersey, expressed frustration that her highly vaccinated district had returned to remote learning. One in Chicago said she hoped the city’s teachers followed through on their threat to walk out so her 12-year-old daughter wouldn’t have to return to a crowded classroom.

This is parenthood nearly two years into the pandemic, as schools reopen after the holidays. Or don’t. Or do halfway, or open and close again, or — they’re not sure. They’ll let you know tomorrow.

The New York Times asked parents to share how they were handling their schools’ approaches. Hundreds responded, almost all of them mothers. Their answers varied widely in specifics but mostly boiled down to: Not well.

“I am screaming inside,” wrote Cathy Nieng, the Chicago mother.

“I cry a lot,” said Juliana Gamble, whose children — ages 2 and 7 — have been in school and day care in Boston for just 11 days in the past eight weeks. “I feel a total loss of control of my life.”

Kate Hurley, of Minneapolis, sent her 7-year-old daughter to school Monday with a KN95 mask but kept her 4-year-old son home because he isn’t eligible for a vaccine yet.

“When we started the pandemic, parenting and teaching while working remotely was hard,” she wrote. “Now we are tired and drained and nearly two years in. Doing it all over again feels insurmountable.”

“I don’t want him to miss out on weeks of school, and it looks like omicron is with us for at least that long,” wrote Heather Malin, whose 5-year-old son is in kindergarten in person in New York City this week. “It was an agonizing decision. Will he be safe? Will the school have the resources to test and adequately mask everyone? I’m scheduled to have surgery for breast cancer in a few weeks, and I am terrified that we’ll come down with COVID (which is bad enough) and my surgery will be delayed.”

Erika Behling, whose 13-year-old daughter is attending school in person in Silver Lake, Wisconsin, said that one relative was currently hospitalized and another had a serious health condition.

“My child is vaccinated and diligently masks, but we live in a fairly rural area where the pandemic has become politicized,” Behling wrote. “As the numbers rise, we feel the walls closing in around us. My 13-year-old has more compassion than the vast majority of adults I see in this area. And she’s scared. As parents, we feel utterly helpless.”

Many parents said they didn’t trust other members of their communities to take precautions.

“I sent my kids to public school in more robust masks than they usually wear, but I don’t have any other way to protect them,” wrote Andrea Rease, a health care worker in San Francisco who said there were some unvaccinated children and parents at the school where her three 5-year-olds attend kindergarten. “They are freshly vaccinated, but I don’t feel the relief I thought I would.”

Others described the toll that a year or more of remote learning had taken on their children, and the pain of suddenly returning to it.

Danielle Kline Haber wrote that about an hour into remote learning Monday, after months in which her son’s school in Hamilton Township, New Jersey, had been open, “our 14-year-old came out from his room and said, ‘I had forgotten how much I hate virtual learning.’” In a follow-up interview, she said she was exhausted from the “constantly shifting guidance.”

Marise, a mother in Philadelphia — who asked to be identified by her middle name because she did not want to cause conflict at her children’s private school before she could transfer them to public school, which is open in person — said that her children, ages 6 and 8, had suffered mentally and academically from remote learning.

“Our school is still operating as though it is March 2020,” she said, adding that she had no idea when the school would reopen; administrators plan to test the entire student body Tuesday before deciding.

She is a nurse and can’t work remotely, and while her husband can do so this week, they will have no access to child care once he has to return to the office.

“Schools should be the absolute last thing to close,” Marise said. “I can eat in a restaurant today, but my kids are home. This is nonsensical.”

Kate, who asked that her last name be withheld because speaking publicly could jeopardize her job, is also frustrated that schools in her town, Maplewood, New Jersey, are remote this week. She said she feared that even when they reopened for in-person learning, her children — ages 7 and 10 — would have their education disrupted because every student in a class is defined as a close contact if one person in the class tests positive, even if all students were masked. (Fully vaccinated children like hers would not have to quarantine if asymptomatic. But students who haven’t completed their vaccination series would have to quarantine for 14 days, and that could mean enough absences to affect the whole class.)

“My kids were out of school for 14 months. I can’t do this again. It’s put me over the edge,” Kate wrote, adding that she supported the school’s mask requirement but opposed its quarantine protocol; which has not been loosened in response to new CDC guidelines. “It is incredibly frustrating to see kids in school across the country where families have done nothing to prevent the spread of COVID, and then to live in a community with around 80%-90% vaccination rate and watch my kids struggle to have a normal school experience.”

Susannah Krug, a mother of four school-age children in North Plains, Oregon, said she had kept her 14-year-old and two 17-year-olds home Monday. But she sent her 10-year-old — who has had his first vaccine shot — to school “even though I’m scared to death.”

“He just did so poorly when school was closed for 18 months,” she wrote.

Alissa Greene, a New Yorker whose 5-year-old daughter’s school is operating in person, said the family had “chosen to keep her in school even though a part of me wants to keep her home.”

“I think her school is doing everything they can, but I’m still apprehensive,” Greene said, adding that increasing pediatric hospitalizations made her more fearful now than last fall, even though her daughter is vaccinated. “We lost her grandmother to COVID in April 2020 and very nearly her grandfather too. That’s the hardest part for me, knowing how badly it can go, how mysteriously this virus can affect people, and feeling like I have to send her out to take her chances with it.”

The latest surge, she and other parents said, has brought an uncertainty that feels overwhelming.

“The omicron calculus is far more wearying than the other COVID math we’ve had to do,” wrote Joe Roland, of Great Barrington, Massachusetts, whose household ranges in age from his 9-year-old son to an 86-year-old relative. “Whether it be from attrition throughout the pandemic, or the multiple variables — definitely more contagious, likely less dangerous, still don’t know what we don’t know — the last few weeks seem as hard as any we’ve had since the beginning of all of this.”