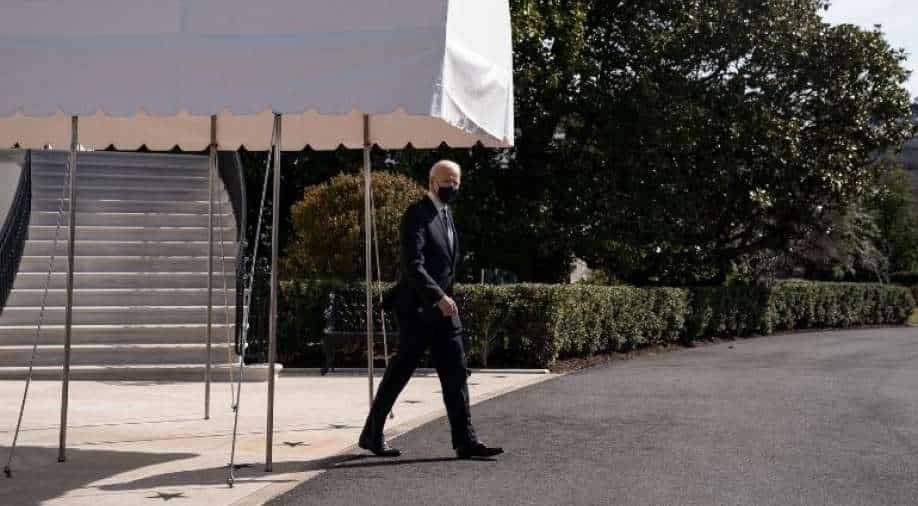 President Joe Biden walks to board Marine One at the White House in Washington.  Photograph:( The New York Times )

Rahm Emanuel, a former Chicago mayor and White House chief of staff in the Obama administration, has been in the running for the position after being passed over for transportation secretary, people familiar with the process said. He remains close to Biden and other senior officials in the White House

President Joe Biden has begun reviewing a list of finalists to serve as key ambassadors as he seeks to cut down on the number of political appointees his predecessor Donald Trump installed at embassies abroad, and to send a signal to career Foreign Service officials that they are valued once again.

That has left hundreds of donors and former lawmakers, who have not been Foreign Service officers but do have close relationships to the president, clamoring for about 35 ambassadorship slots available, according to people familiar with the process. It has also led to a push and pull between the desires of the diplomatic and political worlds.

The tension between those spheres has been most prominently on display in internal deliberations about who to appoint as ambassador to China, one of the most important embassy postings, especially after an extraordinarily rancorous meeting in Anchorage between top Chinese and American diplomats signaled a newly confrontational Beijing.

Biden, people familiar with the process said, has expressed interest in choosing someone he views as a “principal” who could be a political fighter, in other words, a former elected official who would send a different kind of message than a career diplomat would.

Rahm Emanuel, a former Chicago mayor and White House chief of staff in the Obama administration, has been in the running for the position after being passed over for transportation secretary, people familiar with the process said. He remains close to Biden and other senior officials in the White House.

But the diplomatic world is pushing for R. Nicholas Burns, a veteran Foreign Service officer and a former ambassador to the North Atlantic Treaty Organization, to get the post, arguing for a career professional over someone whose work has been steeped in domestic politics. Emanuel, who is also said to be under consideration as ambassador to Japan, declined to comment on the state of internal deliberations. Burns did not respond to a request for comment.

Biden has yet to be presented with or weigh in on the full list of posts overseas, according to an administration official. But he has been reviewing a “partial list,” with some candidates for crucial jobs, and intends to be deeply involved in the selection process. Unlike President Barack Obama, who advisers said never dove deeply into his diplomatic nominees and left the jigsaw puzzle of appointments to his staff, Biden was described as an “Irish politician” with great personal interest in where his large network lands.

“Biden has been deeply enmeshed in the foreign policy world his whole life,” said David Axelrod, a former senior adviser to Obama. “He spent a lot of his time with ambassadors. It would mean a lot to him.”

The administration is expected to move its first slate of nominees — which is likely to include more substantive posts like NATO ambassador and European Union ambassador, along with posts to some European and other key countries — by mid-April, an administration official said.

So far, the only ambassador appointment Biden has made is to the United Nations, with Linda Thomas-Greenfield taking over in February as the United States’ top representative.

That puts the president at least a month behind the Obama administration, which began announcing appointments in March 2009. Trump, for his part, left some assignments, like U.S. envoy to Singapore, vacant for the entirety of his administration, after his initial pick, K.T. McFarland, stalled in the Senate. She withdrew her nomination after Democrats accused her of misleading lawmakers over whether she had known about discussions between former national security adviser Michael Flynn and a Russian diplomat.

Democrats said the dissolution of the United States’ standing abroad over the past four years would make Biden’s selections more important and more scrutinized.

“It is hard to quantify the extent of the damage caused by Donald Trump’s reckless fixation with installing unvetted, unqualified, incapable and often times offensive political allies to serve in some of the most consequential national security posts of our government,” said Sen. Bob Menendez, D-N.J., chair of the Foreign Relations Committee.

There are people who are viewed as “must dos” for ambassadorships in the Biden administration, including Cindy McCain, the widow of former Sen. John McCain; David Cohen, a Comcast executive who was an early Biden donor; and Mark Gitenstein, a close friend of Biden’s and former ambassador to Romania, who is said to be in the running for ambassador to the European Union.

Other close Biden friends who were expected have had their first pick for positions overseas, like Ted Kaufman, the former Delaware senator, and Christopher Dodd, the former Connecticut senator who was seen as a front-runner for Ireland, have taken themselves out of consideration.

Many donors and political appointees eager for help in the process have leaned on Speaker Nancy Pelosi and Sen. Chris Coons, D-Del., to call the White House and advocate them.

Because of the challenge of installing a diverse group representative of the United States in such posts, Biden administration officials have told candidates to name more than one country in which they would be willing to serve.

Biden has a smaller network of big donors than many politicians, making the musical chairs of selecting ambassadors slightly less complicated than it would have been for Hillary Clinton, the 2016 Democratic nominee, known for her close relationships with donors who funded both her own political career and her husband’s.

During a 2020 campaign that was almost all virtual, it was difficult for donors to develop close personal relationships with a presidential candidate they had to meet over video chat instead of host in their living rooms.

What Biden does have, however, is a huge political circle, which is making the stakes more competitive. Former Sen. Claire McCaskill of Missouri, Emanuel and Vicki Kennedy, the widow of former Sen. Ted Kennedy of Massachusetts, are people Biden feels close to and who could make substantive arguments for being appointed to coveted posts abroad. McCaskill declined to comment on her interest in such a posting.

“The professional Foreign Service cares a lot about having competent, professional people in the roles,” said Richard Fontaine, chief executive of the Center for a New American Security. “You have political appointees with experience and access to the president or senior staff. Then you have another group that would struggle to find the country they were nominated for on an unmarked map. That’s the problematic group.”

Briefing books, which include two or three options for every post, have been compiled by Steve Ricchetti, counselor to the president, and Cathy Russell, director of the White House Office of Presidential Personnel. Secretary of State Antony Blinken and Jake Sullivan, the national security adviser, are also involved in the selection process.

In a post-Trump world, the nominations are arguably more important to the president’s overall mission than ever before.

“There are more questions all over the world now about where America is going,” said Fontaine, noting that ambassadors would have to explain what Trump-era policies would stay or change.