Indonesians are fuming at Malaysia for parodying their national anthem 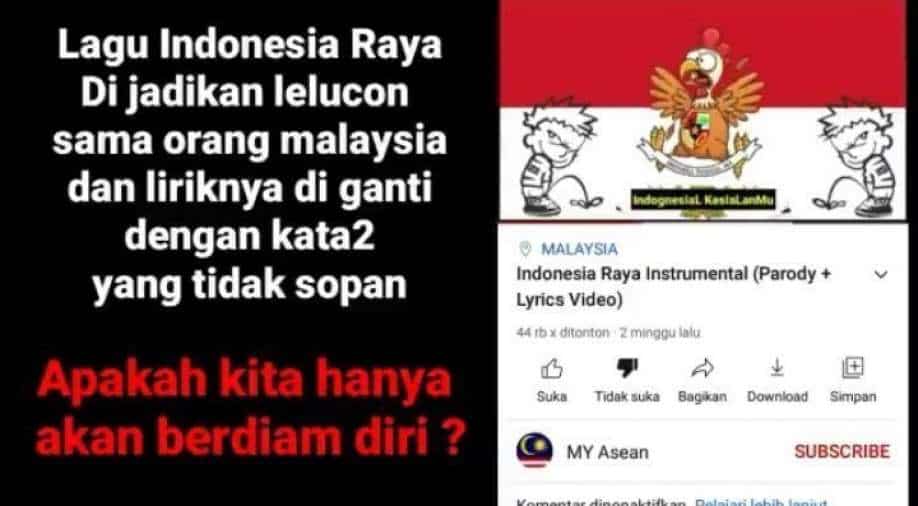 A parody of the Indonesian national anthem posted by a Malaysian Youtuber has left the country fuming.

Tempers flared when the video, named "Indonesia Raya Instrumental (Parody + Lyrics)", in the Malay tongue of the language the two nations share, became a web sensation throughout the end of the week.

It was initially posted fourteen days prior by a record named "MY Asean", which utilized a Malaysian banner as its profile picture.

Another refrain contained a reference wanting sick for Indonesian President Joko Widodo, while there was additionally a hostile joke on the name of the nation's establishing father, Sukarno, who during the 1960s announced a Ganyang Malaysia, or "Squash Malaysia", crusade following the nation's arrangement.

It additionally changed Indonesia's symbol from the Garuda, a legendary monster winged creature, into a scared chicken, while superimposed in the foundation were photos of a youngster peeing on an Indonesian banner.

Yoshi Iskandar, organiser of data and social culture capacities at Indonesia's international safe haven in Kuala Lumpur, said the Malaysian specialists were all the while researching the issue.

"We appeal to Indonesians to control themselves and regard the examination cycle at present progressing as per the relevant law," Yoshi said.

“The Malaysian government has taken actions, as per Indonesia’s request, including [requesting that YouTube] take down the video,” foreign ministry spokesman Teuku Faizasyah told This Week in Asia on Monday.

The Malaysian Embassy in Jakarta has strongly condemned an alleged provocative act through a video that could affect ties between Malaysia and Indonesia.

In a statement released Sunday night (Dec 27), the embassy confirmed that Malaysian authorities were investigating the video found to be insulting Indonesia, which is said to have been uploaded by a Malaysian.

"If the video is found to be uploaded by a Malaysian citizen, stern action will be taken based on existing laws," the statement said.

The original video, which has been viewed at least 44,000 times, has been taken down and the account deleted, but some YouTube users have reposted the video. One even revived the MY Asean account to “provide the evidence for the [Indonesian] government” when they follow up the matter with their Malaysian counterparts.

While the neighbors have a moderately decent respective relationship, their residents are up to speed in an apparently never-ending contention that infrequently explodes over everything from food to culture and sports.

Indonesia and Malaysia have recently quibbled over the beginnings of rendang, a marinated hamburger delicacy; shadow manikins; conventional moves; and even who was first to concoct nasi goreng, or seared rice – a contention that additionally ordinarily includes Singapore.

The contention normally tops during football match-ups or badminton matches between the two nations, when public pride is on the line.