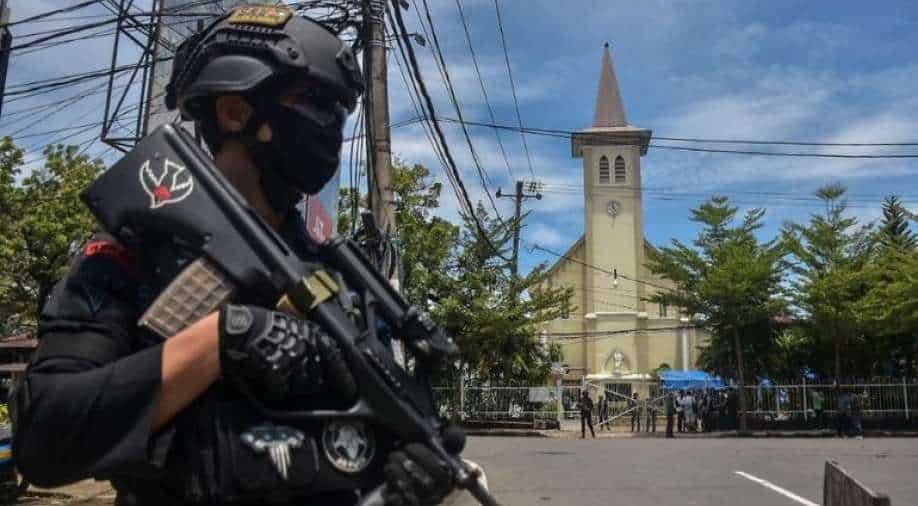 An Indonesian policeman stands guard outside a church after an explosion in Makassar on Sunday. Photograph:( AFP )

Two suspects behind the powerful blast were killed as they rode a motorbike into the compound of the church in Makassar city on Sulawesi island, authorities said

An Indonesian cathedral was rocked by a suicide bombing on Sunday that wounded 20 as worshippers celebrated the start of Holy Week, an attack slammed by the country's president as an 'act of terror'.

Two suspects behind the powerful blast were killed as they rode a motorbike into the compound of the church in Makassar city on Sulawesi island, authorities said.

Authorities had not previously confirmed that the bombing, which happened around 10:30 am local time (0330 GMT), was a suicide attack.

Twenty church officials, congregants and security staff were injured by debris from the blast, authorities said.

A church security guard tried to prevent the two perpetrators, who have not been identified, from entering when the explosion occurred, they added.

Indonesian President Joko Widodo said he 'strongly condemned this act of terror'. "Terrorism is a crime against humanity," he said. "I call on everyone to fight against terror and radicalism, which go against religious values."

"There were several injured people on the street. I helped one woman... who was wounded and covered in blood," Yosi said.

"Her grandchild was also injured. There were body parts everywhere."

It was not clear if the victims' wounds were life-threatening.

"We were finishing the service and people were going home when it happened," Pastor Wilhelmus Tulak told reporters.

Forensic investigators have been poring over body parts scattered at the scene in a bid to determine the attackers' identities.

No one has claimed responsibility for the attack.

Churches have been targeted in the past by extremists in Indonesia, the world's biggest Muslim-majority nation and home to several religious minorities including Christians, Buddhists and Hindus.