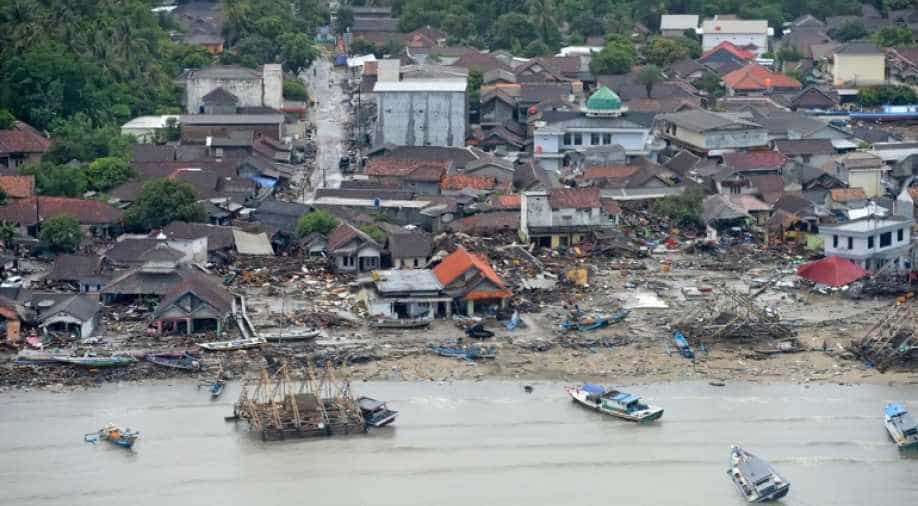 An aerial view of an affected area after a tsunami hit the coast of Pandeglang, Banten province, Indonesia. Photograph:( Reuters )

'1,459 people are injured, while 128 remain missing,' Sutopo Purwo Nugroho, a spokesman for Indonesia's disaster mitigation agency, said in a statement.

The tsunami in Indonesia killed at least 373 people and injured more than 1,400 on the islands of Java and Sumatra, an official said on Monday.

"1,459 people are injured, while 128 remain missing," Sutopo Purwo Nugroho, a spokesman for Indonesia's disaster mitigation agency, said in a statement.

Survivors of the tsunami received aid from community and religious groups but not yet from the government, a neighbourhood chief in the town of Labuan, Pandeglang, told Reuters.

People searched through the debris of collapsed houses as aid posts were set up in the coastal town, part of the worst-affected area on Java's west coast.

Rescuers using heavy machinery and their bare hands searched through debris, pulling out bodies in the worst-affected areas on the west coast of Java island, where and hundreds of soldiers and volunteers looked for victims along a 100 km (60 miles) stretch of shore.

President Joko Widodo visited the affected area on Monday and praised the authorities for swift action in responding to the latest disaster.

Social media footage showed how the tsunami washed away an outdoor stage where Indonesian rock band Seventeen was performing for about 200 guests at a party for utility company Perusahaan Listrik Negara (PLN).

Dudi Dwiriadi, a district military commander, said personnel and volunteers had been briefed to sweep at least 100 km (60 miles) of coastline in search of victims.

The vast archipelago, which sits on the Pacific "Ring of Fire", has suffered its worst annual death toll from disasters in more than a decade. Earthquakes flattened parts of the tourist island of Lombok in July and August, and a double quake-and-tsunami killed more than 2,000 people on Sulawesi island in September.

Aerial video footage of the Sunda Strait between the islands of Java and Sumatra showed Anak Krakatau (Child of Krakatau) still erupting on Sunday night, with sustained bursts of white smoke and ash filling the sky.