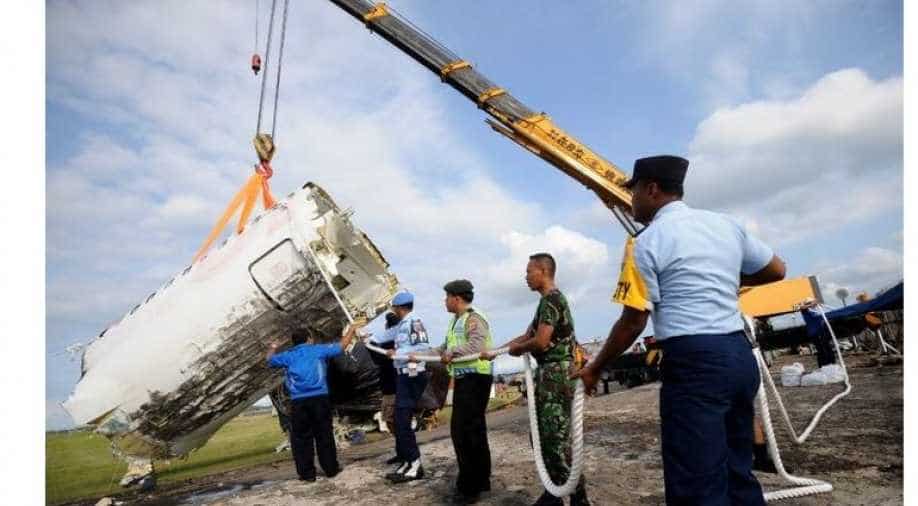 Indonesian rescue workers help remove a section of a Lion Air Boeing 737 from the sea four days after it crashed while trying to land at Bali's international airport near Denpasar on April 17, 2013. Photograph:( AFP )

The Boeing plane model was later grounded worldwide after an Ethiopian Airlines 737 MAX crashed after taking off from Addis Ababa in March, killing 157 people.

Indonesian authorities have cited failures in the Boeing 737 MAX design and oversight as contributing to the 2018 Lion Air plane crash, the Wall Street Journal reported on Sunday.

The report into the crash, which will be formally released in early November, also blames pilot error and maintenance issues for the crash that killed 189 people shortly after the flight departed from Jakarta last October, the newspaper said.

The Boeing plane model was later grounded worldwide after an Ethiopian Airlines 737 MAX crashed after taking off from Addis Ababa in March, killing 157 people.

Preliminary investigations into both accidents have implicated the MCAS anti-stall system, designed specifically for the 737 MAX.

Indonesian investigators could still change their findings, which have been shared with the US Federal Aviation Administration (FAA) and National Transportation Safety Board (NTSB), the Wall Street Journal says.

US officials are scheduled to visit Indonesia at the end of September to discuss the report, in which Indonesian investigators list some 100 factors in the crash.

While the NTSB is unlikely to object to the findings, Boeing and the FAA are worried that the report "will unduly emphasize design and FAA certification missteps," the newspaper reported, citing unnamed sources familiar with the matter.

"Boeing continues to support the investigation as the accident report is being completed," a spokesman for the company told AFP.

The FAA and NTSB declined to comment, referring questions to the Indonesian authorities.

The NTSB is preparing to announce "around the end of the month" recommendations to improve pilot and crew training, and to the FAA's certification process for new airplane models, according to the newspaper.

A panel of international regulators set up by the FAA is also expected in the coming weeks to submit a report critical of the relationship between Boeing and the agency.

New FAA head Steve Dickson is to meet with his international counterparts on Monday ahead of an International Civil Aviation Organisation meeting in Montreal to discuss Boeing's proposed changes to the 737 MAX and its eventual return to service.