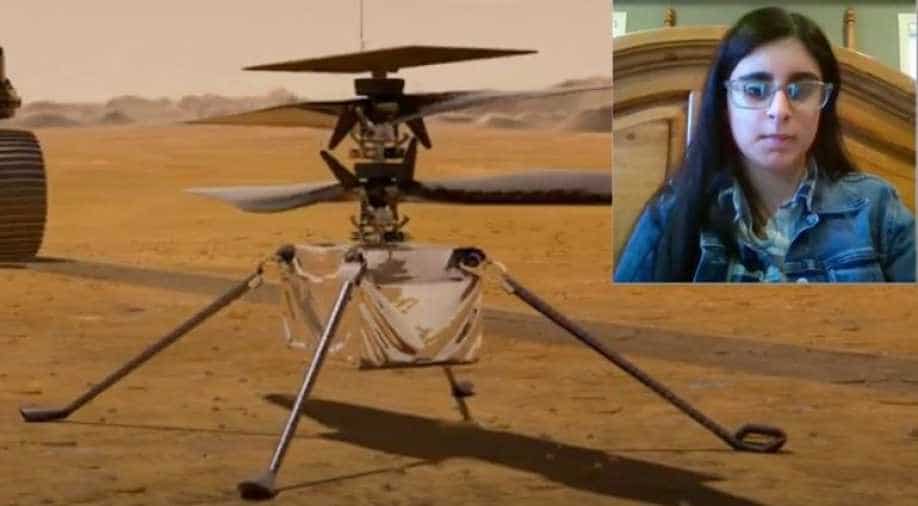 Left: The Mars helicopter, Right: The student who named it | Courtesy: NASA Photograph:( Others )

The teenager had suggested the name in NASA’s “Name the Rover” essay contest which had received over 28,000 entries.

According to NASA’s website, Rupani’s submission read -  "The ingenuity and brilliance of people working hard to overcome challenges of interplanetary travel are what allow us to experience wonders of space exploration”.

Also read: NASA to launch US's first crewed spaceflight in almost a decade on May 27

NASA’s Mars Helicopter will become the first aircraft to attempt powered flight on another planet.

Rupani currently studies at the Tuscaloosa County High School in Alabama, and submitted one of the 28,000 essays received in connection with the helicopter.

NASA’s website claims that Thomas Zurbuchen, associate administrator of NASA's Science Mission Directorate, made the choice for the rover's name, and NASA Administrator Jim Bridenstine chose the name for the helicopter.

"Ingenuity encapsulates the values that our helicopter tech demo will showcase for everyone when it takes off next year as the first aircraft on another planet’s surface," said Bridenstine.

"I am proud that NASA’s Mars Helicopter will be named by Vaneeza Rupani of Northport, Alabama," said Senator Richard Shelby of Alabama.

Also read: Need some space? NASA has got the job for you

"This is a unique privilege. Ms Rupani’s essay on why she chose the name 'Ingenuity' highlights her creativity, originality, and intelligence. Her grasp on the importance of exploration is extraordinary, and I am confident that she has a bright future ahead. Congratulations to Ms. Rupani on being selected for this prestigious honor."

NASA’s Mars Helicopter, Ingenuity, is set to arrive on Mars on February 18, 2021. Its mission is to demonstrate the first powered flight on another world.