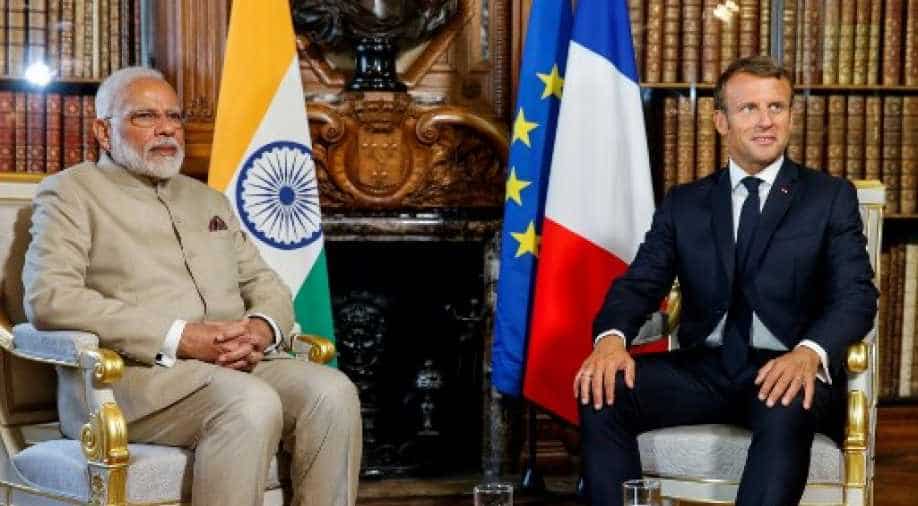 "I'm meeting you for the first time after you won the election for the second term. I congratulate you for your victory, which also shows how good is the democracy of India," Macron said with PM Modi by his side.

"We spoke on G7. I wanted India to be a part of G7. I have changed some parts about how G7 is organised," President Macron said, adding,"there are several matters in which we can't move without India, there are matters in which India's presence is important."

"Both nations share a lot of confidence," Macron asserted. Macron said it was a priority to talk about climate change with India's prime minister.

The delivery of Rafale fighter jets was one of the key areas of discussion between the two leaders. Macron said the first Rafale jets would reach India next month.

During the meeting, Macron emphasised India's importance in the global arena.

"We've held talks with PM Modi on several issues including digital, cyber security and Africa. We will have to work on such matters together," Macron informed reporters.

Macron expressed condolences for the Pulwama attack which took place on February 14 in which CRPF personnel were killed. French President while mentioning Pulwama attack said, "will work together to eradicate the scourge".

PM Modi told me everything about Kashmir and the situation in Jammu and Kashmir, Macron told media persons gathered at the presser.

"I said Pakistan and India will have to find a solution together and no third party should interfere or incite violence," Macron said while adding that he will tell the Pakistani PM Imran Khan "that they (India and Pakistan) have to solve issue bilaterally and stability in the region should be maintained and no terror activities should happen."

"We wish to work togther against terrorism," Macron said.

PM Modi emphasised on strategic partnership between India and France while addressing the joint press conference as he thanked the French president for the warm welcome accorded to him in Paris.

PM Modi reiterated India's commitment towards climate change while adding that the country stands with France on the issue.

"France and India did not only hold good talks but also took major steps. We are walking on the path of strategic partnership since the last two decades," PM Modi said.

"We're happy that the first of the 36 Rafale fighter aircraft will be handed over to India next month. France is the first country with which we have signed the civil nuclear arrangement," the Indian prime minister said.

Earlier, PM Modi met French President Macron at the Château de Chantilly just hours after landing in Paris. This is PM Modi's fifth meeting with the French President. PM Modi is on a two-day visit to France.

On Friday, the Indian prime minister will be meeting French Prime Minister Édouard Philippe and address the Indian diaspora at the UNESCO headquarters.