In war-torn Yemen, how donkeys became a prized commodity 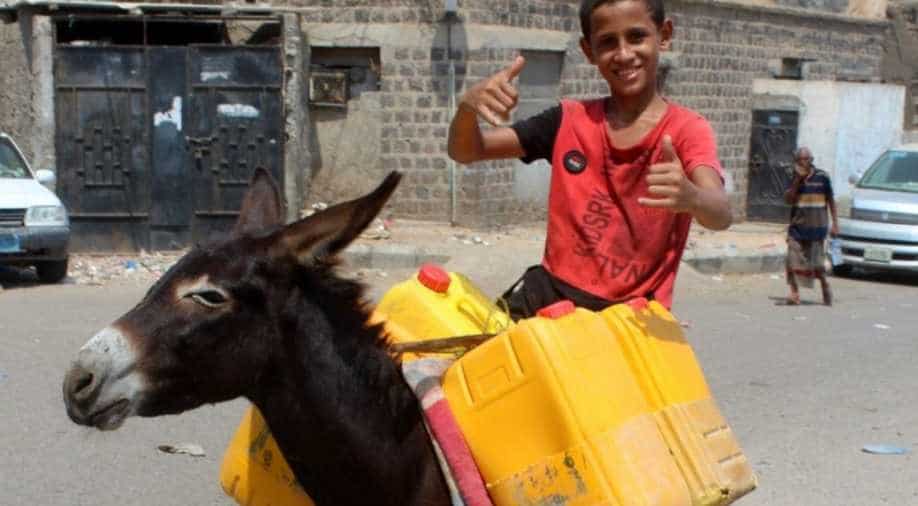 A Yemeni youth poses for a picture as he rides a donkey carrying plastic jerrycans in the southern city of Aden, on September 16, 2020. Photograph:( AFP )

Yemenis have resorted to using donkeys to transport water and goods, as the conflict that has ravaged the economy for more than five years leaves gas-guzzling SUVs out of reach for most

Abu Mohammed fusses over the donkeys he is selling in war-torn Yemen, where the animal has become a must-have commodity at a time of biting fuel and currency crises.

Yemenis have resorted to using donkeys to transport water and goods, as the conflict that has ravaged the economy for more than five years leaves gas-guzzling SUVs out of reach for most.

"The higher the price of fuel and costs of living, the more demand there is for donkeys," said Mohammed, as he saddled up along a garbage-strewn road in the southern port city of Aden.

No part of Yemen has been spared the conflict, in which Iran-backed Huthi rebels have captured swathes of the north from the internationally-recognised government.

Meanwhile, rampant inflation has made most supplies scarce and expensive.

Aden is under the control of the separatist Southern Transitional Council, which while technically an ally of the government, is at odds with the loyalists over the future status of the south.

As Yemen sinks deeper into crisis, the UN estimates three quarters of its 29-million population is dependent on aid, in what it calls the worst humanitarian crisis on earth.

A litre (a quarter of a gallon) of petrol now sells for $0.50, in an oil-producing country where teachers earn less than $25 a month.

Yemen's currency keeps depreciating -- it is currently at over 800 riyals to the US dollar on the black market, compared to 610 riyals in January.

In Aden, built partly on a volcanic site called Crater, the use of donkeys was long the norm for the hilly coastal district before modern means of transport.

Now, in the 21st century, children on donkeys transporting heavy loads and jerrycans of water have once again become a common sight.

"Sometimes gasoline can't be found for as long as two weeks," said Mohammed. "People are returning to simpler methods."

The 38-year-old father of nine, who looks far older than his years, turned to donkey trading two years ago after he lost his job.

Business has since boomed.

He buys the animals from nearby Abyan province, where they cost less, and then puts them up for sale in Aden.

"How could I have fed my children with the cost of living so high? Even if I looked for another job, I can't find one," he said.

"Thanks to God, and then to donkeys, I have an income."

Mohammed Anwar, a father of three who also supports his mother and sister, said his household is one of many in Yemen without piped water.

"If we didn't have a donkey, we wouldn't have water," he said, as he led the animal to the local pump with a pile of jerrycans.

But as queues at petrol stations stretch longer and demand for donkeys rises, the price of the animal is also going up.