In Spanish city, parents give their children space to be independent 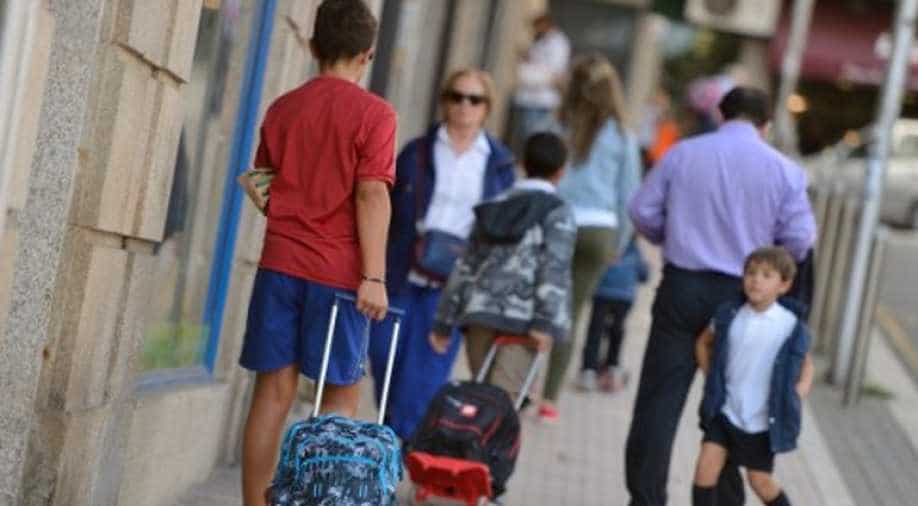 25 per cent of stuents aged six to 12 from the seven establishments who encourage the initiative walked to school alone last year, according to statistics. Photograph:( AFP )

For many parents, the thought of letting their offspring walk to school alone is source of much angst. But the Spanish city of Pontevedra has decided to advocate giving children their space.

Launched in 2010, the "Road to School" programme has been taken up by seven establishments in the northwestern city which believe that far from being in danger, children as young as six actually thrive going to school without adults, developing strong self-confidence.

Dragging their wheeled schoolbags across a pedestrian crossing, brothers Pablo and Jorge Pazos, 8 and 10, are just one example of an initiative based on research by Italian educational psychologist Francesco Tonucci, who believes in giving kids autonomy.

"We talk about our stuff, our games, nothing important but things that adults don't really understand," says Pablo, 8.

"It's not necessary for adults to be with us all the time," he adds politely.

"They bother us a little, they talk all the time, ask 'how is school?'."

Pablo prefers wandering around his district, buying bread before going home and "sometimes, being a little silly, like the other day when we hid behind a tree to scare a friend."

Playing outside, no screens

According to city statistics, 25 per cent of students aged six to 12 from the seven establishments who encourage the initiative walked to school alone last year.

They are registered as such, and if they don't arrive at school as usual, staff call their parents.

In some cases, adults stand at the most dangerous road crossings to help children across, but otherwise, they are on their own.

"When I was a kid, we played in the streets, where we would discover the world," he tells AFP in Pontevedra, an 83,000-strong city in Galicia.

"Now, we have to rebuild this normality."

His ideas have inspired some 20 cities in Spain, as well as schools in Italy, Latin America, Turkey and Lebanon.

Adamantly against "computer games made to keep children at home for a long time," Tonucci tells parents to let them out and "invent their own games".

"It feels like a form of abandon but it's a way of loving them: I leave you alone because I trust you."

He believes that "the presence of an adult deprives children of surprise, of discovering things on their own, of risk-taking, which is an essential part of playing."

Pilar Lores, principal at one of the schools that has adopted his ideas, says the act of letting children walk alone builds their self-confidence.

"They have to look after one another, they also arrive more awake, fresher, and hyperactive or fidgety children are calmer because they have released their adrenalin," she says.

Tonucci, meanwhile, has a response for every parent's anxious queries.

"The desire for transgression increases in children who cannot be a little naughty when they need to, and explodes in teenage years in a much more dangerous manner," he says.

In Italy, he estimates that only around seven percent of six- to 11-year-olds go to school alone, and blames the media for creating panic, particularly "with television programmes that analyse the most horrible crimes committed on children."

But after years of research, Tonucci says sexual abuse, for instance, is often committed by people close to the children, and not by strangers in the street.

Paradoxically, accidents also often happen when an adult is present.

Miguel Anxo Fernandez, who has been mayor of Pontevedra for 17 years, is a fan of Tonucci's ideas -- so much so that he had one of his books translated into Galician, the regional dialect.

Generally speaking, he has been a strong advocate of centering the city around its people -- adults and children -- reducing car traffic and creating more pedestrian and cycling areas.

This earned Pontevedra a UN Habitat prize in 2015, which aims to reward individuals or institutions for improving living conditions in urban centres.

The reduction of car traffic, for one, has had concrete results.

Since February 2011, there have been no deaths related to traffic accidents in the city, says Daniel Macenlle, Pontevedra police chief.

And the "Road to School" programme has contributed to this, he says, by reducing the risk of accidents near schools, which are often due to the influx of parents droppings off their kids.