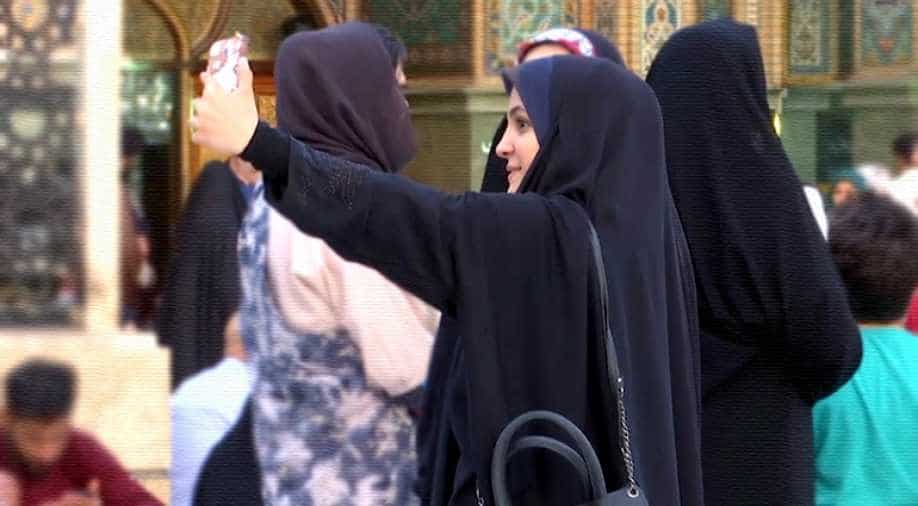 The simple act of walking has become a display of defiance for some young Iranian women who move in Tehran's streets without a compulsory headscarf, or hijab. With every step, they risk harassment or even arrest by Iran's morality police, whose job it is to enforce the strict dress code imposed after the 1979 Islamic Revolution. Photograph:( AP )

At a time when Iran is reeling under the consequences of US sanctions, the country is facing a debate over whether women should wear hijab or not.

More and more women are coming out expressing their desires against the dress code.

News agency AP cited a 20-year-old high school graduate Paniz Masoumi as saying, "I would not remove my hijab because I am not looking for trouble. They have impounded my car for two weeks now under the excuse of being slackly veiled. I am sure that I had not removed my headscarf. They have labelled me as poorly veiled to impound my car and charge me money."

Another 18-year-old high school graduate Nikki Ghassempour said, "If the society accepts the freedom of choice when it comes to hijab and change how they view those who are not veiled, I would remove my hijab too. Otherwise, I won't."

While many have restrained their desires due to the fear of the ruling Shiite Muslim clergy and their security agencies, some women have found an alternative to hijab in loosely draped colorful scarves. The scarf show as much hair as they cover.

Even in Tehran's grand bazaar, most female shoppers are seen carrying casual hijabs.

Still, a sizeable minority of women have covered head-to-toe in black robes and tightly pulled headscarves - the chador.

Reformist lawmaker Parvaneh Salahshouri said, "The morality police were not successful in institutionalising the hijab for women. The question I have always asked the policymakers in this regard has been whether their policies have worked or not. What we see is that the morality police have been a failure".

Last month, a video showing morality police grabbing an unveiled teenage girl and violently pushing her into the back of a police car, prompted widespread criticism.

According to Iran's Islamic Penal Code, women, who appear in public places and roads without wearing an Islamic hijab, will be sentenced to ten days to two months’ imprisonment or a fine of 50 thousand to five hundred rials.

Some Islamic hardliners in Iran have called for harsh punishment, even lashes, arguing that allowing women to show their hair leads to moral decay and the disintegration of families.

Amid all the chaos, Tehran is barely being able to cope with US President Donald Trump's maximum pressure campaign. US sanctions have hit the Iranian economy hard. While the oil-rich nation's crude exports have been down, inflation and unemployment have risen drastically. Frustration over the sanctions is running high among Iranians, who have seen the value of Iran's currency plummet by about 60 per cent over the past year.

But inside Iran, the debate is still over whether women should leave their houses without a hijab