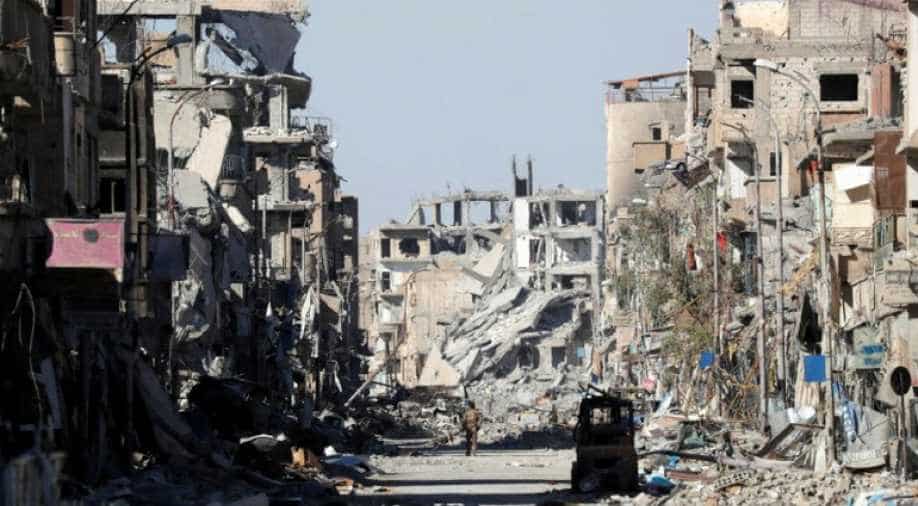 A total of 19,666 people were killed this year as a result of the conflict, which erupted in 2011, the Syrian Observatory for Human Rights monitoring group reported.

Syria's nearly eight-year-old conflict saw its lowest annual death toll in 2018 as the regime reasserted its authority over swathes of territory, a war monitor said on Monday.

A total of 19,666 people were killed this year as a result of the conflict, which erupted in 2011, the Syrian Observatory for Human Rights monitoring group reported.

"2018 was the lowest annual toll since the start of the conflict," Observatory chief Rami Abdel Rahman told AFP.

The Britain-based monitor relies on a vast network of sources across Syria to document the war that broke out after the brutal repression of nationwide anti-regime protests in 2011.

The death toll for 2017 stood at more than 33,000 and the highest annual figure was reached in 2014 -- the year the Islamic State jihadist group proclaimed a "caliphate" over large parts of Syria and neighbouring Iraq -- when 76,000 people were killed.

"Most of those killed during the first part of the year were killed in regime and Russian bombardment of opposition areas, including Eastern Ghouta," Abdel Rahman said.

"The majority of those killed in the second half of the year were killed in coalition air strikes," he added.

The first months of 2018 were marked by major Russian-backed government operations to retake rebel and jihadist bastions in and around the capital Damascus.

The bloodiest of them was an assault on Eastern Ghouta, a densely-populated area east of Damascus that remained besieged for years.

The most active front of the past few months has been the battle against the remnants of the Islamic State group in eastern Syria.

The Kurdish-led Syrian Democratic Forces (SDF), backed by a US-led coalition carrying out air strikes, launched an offensive on September 10.

Jihadist fighters defending the last rump of their once sprawling proto-state, near the Iraqi border along the Euphrates River, have put up fierce resistance but seem close to collapsing.

While fighting has ended or is winding down in several parts of the country, 2019 could see its share of military flare-ups.

Besides the continued threat posed by IS sleeper cells even after it loses its last pocket in eastern Syria, two other areas remain of concern.

Turkey has threatened a major offensive against the Kurdish militia that controls regions along its border in northeastern Syria.

The announcement made by Donald Trump two weeks ago that he had ordered a full troop pullout from Syria left the US-led coalition's Kurdish allies more exposed.

Thousands of rebel fighters and jihadists also remain in Idlib, a northern province where many of them were transferred as a result of deals to end government assaults on other areas across the country.

Under an agreement reached in Russia, Turkey was tasked with disarming some of the groups active in Idlib but little progress has been achieved.

President Bashar al-Assad has consistently said that his forces would seek to reconquer the entire Syrian territory.

According to the Observatory, the government and its allies now controls 60.2 per cent of Syrian territory, while the SDF hold 28.8 per cent.

The Kurds last week asked for the regime's help against the threat of a Turkish offensive, a move that will put pay to their ambitions of increased autonomy.

By comparison, the US-based Armed Conflict Location and Event Data Project puts the number of conflict-related deaths in Afghanistan at more than 40,000 this year.