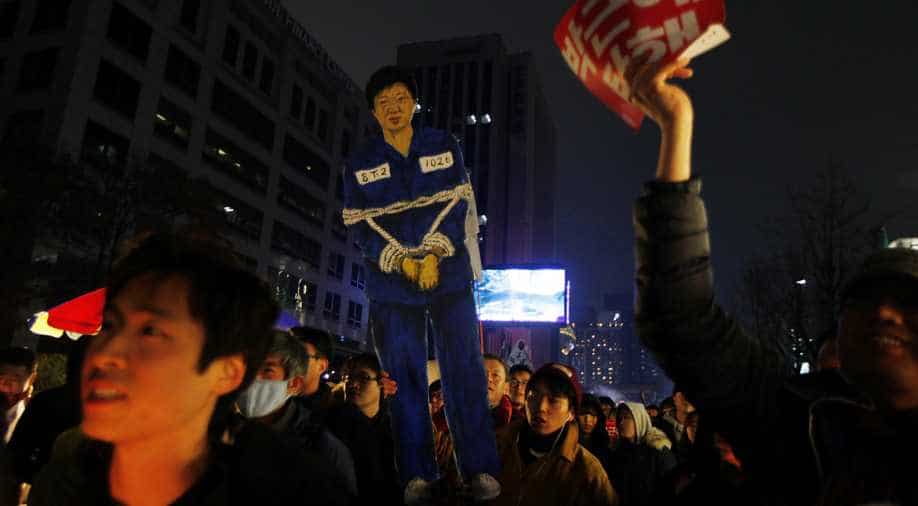 Park has been accused of colluding with a close friend, Choi Soon-Sil, who faces embezzlement charges. Photograph:( Getty )

The impeachment of South Korea's scandal-hit president, Park Geun-Hye, looked certain Tuesday as dissident lawmakers in her ruling party said they would support an opposition motion calling for her ouster.

The national assembly is slated to vote on the impeachment motion on Friday, with the backing of around 30 Saenuri Party MPs needed to reach the required two-thirds majority.

The ruling party had initially insisted that Park be allowed to step down voluntarily, and had proposed a timeline that would see her resign in April -- 10 months short of her full presidential term.

But a series of massive anti-Park protests -- the latest of which saw up to 1.6 million take to the streets of Seoul on Saturday -- appeared to have swayed the mood of the party's anti-Park faction.

"Following rounds of discussion, we've concluded that the card of the president leaving her office in April has already been rejected by the people," said a member of the faction, lawmaker Hwang Young-Cheul.

"All preparations have been made that are necessary to ensure the impeachment motion be passed," Hwang was quoted as saying by the Yonhap news agency.

According to Hwang's count, around 35 Saenuri Party MPs would support the motion which, if adopted, would still require approval by the Constitutional Court -- a process that could take up to six months.

Accused of colluding with a close friend, Choi Soon-Sil, who faces embezzlement charges, Park said last month she would be willing to step down in the face of the weekly mass protests.

But the opposition said Park's offer, which put the manner and timing of her resignation in the hands of parliament, was an effort to buy time and avoid impeachment.

Prosecutors say they have evidence that Park colluded in Choi's efforts to coerce South Korean companies to "donate" tens of millions of dollars to foundations she used for personal gain.

Park has been named as a formal suspect in the investigation, making her the first sitting president to be subject to a criminal probe while in office.

While she retains the presidency, Park cannot be charged with a criminal offence except insurrection or treason, but she would lose that immunity once she leaves office.