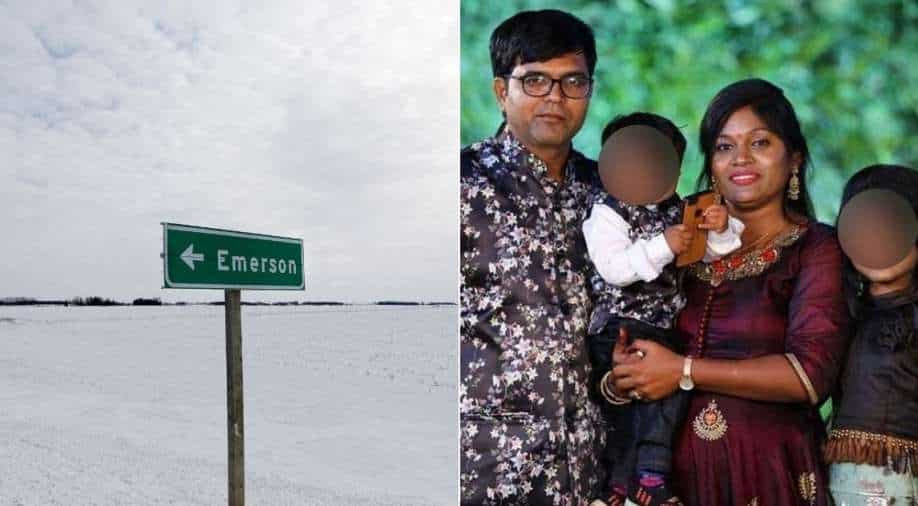 The Indian family in this undated handout photo, which was released by the RCMP on January 27, 2022. Photograph:( Reuters )

The family of four were found dead near Emerson, Manitoba, approximately 12 metres from the Canada-US border on January 19 by Canadian police

India's High Commission in the Canadian capital of Ottawa has confirmed the identities of the four Indians who were frozen to death near the border between the United States and Canada last week. Earlier, it was revealed that the family belonged to the western state of Gujarat.

The family of four were found dead near Emerson, Manitoba, approximately 12 metres from the Canada-US border on January 19 by Canadian police.

Previously, the authorities had said that the family included an adult male, adult female, teen male and infant. Now, they have revealed that the victims included a young girl and not a teen male.

The identities of all four victims were confirmed after the autopsies were completed on January 26 and the next of kin of the deceased have been informed.

It has been understood that the four were among four families from the same village who had travelled to the border this month but got separated from the group and probably caught in a blizzard.

The press release from the Indian High Commission added that after medical examination the death of all the persons have been determined to be consistent with exposure to the outdoor elements.

The Identities of four victims, whose bodies were recovered near the Canada-US border in Manitoba on 19 January 2022, have now been confirmed.@MEAIndia @IndiainToronto @rcmpmb pic.twitter.com/ptwj2ER0Uf

Meanwhile, authorities in India have initiated a probe into illegal immigration in the aftermath of the horrific tragedy. Indian police have detained six people in connection, the officials informed on Thursday (January 27).

As informed by the Indian police, the people who are detained were running a travel and tourism company in Gujarat.

Police official AK Jhala in the state capital of Gandhinagar said, "We are now trying to nab the human traffickers who managed to send this family and others abroad via illegal channels."

A foreign ministry official in India's capital New Delhi said authorities were coordinating with US and Canadian border officials to investigate the illegal immigration case.