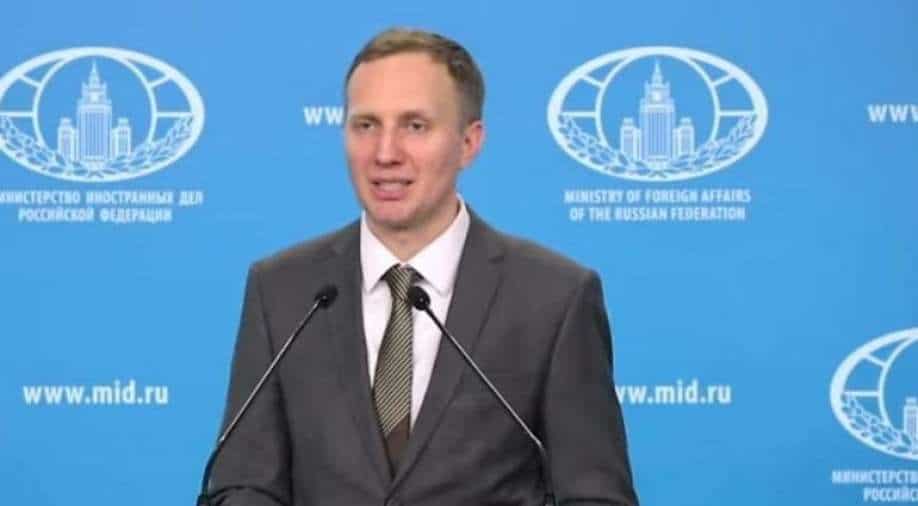 In this image, Russia's Deputy Director of the Information and Press Department Alexey Zaytsev can be seen during a press conference Photograph:( WION )

Amid the tense situation over Ukraine and talks with the west, Russia on Thursday said that it has kept Indian "partners" in the loop.

In response to a WION question at the weekly presser of the Russian foreign ministry, deputy director of the information and press department Alexey Zaytsev said," we are informing our Indian partners on the relevant security situation in Europe and corresponding negotiations."

Russia is keen that the West gives it a security guarantee over Ukraine not joining the NATO alliance. A number of rounds of talks have happened between US and Russia in Geneva, including between US Secretary of State Blinken and Russian foreign minister Lavrov. West is concerned over the Russian invasion of Ukraine, something Moscow has been dismissing.

Zaytsev explained that "privilege partnership with New Delhi is one of the key tasks of our foreign policy" and both sides are "developing cooperation" in trade, economics and energy, military-technical, science and technology, space, and other spheres. He highlighted how both countries "support the concept of multipolarity in the world" and have a "close position" on a number of issues.

Also see | What are NATO's next steps if Russia invades Ukraine?

During the meet, they "exchanged views and assessments on the events in Geneva, Brussels, and Vienna on security guarantees for Russia" according to a Russian readout of the meet.

Interestingly,  Deputy foreign minister Sergei Ryabkov had led the talks from the Russian side in Geneva, where the US was represented by US Deputy Secretary of State Wendy Sherman. The Russian foreign ministry reaction comes even as Wendy Sherman made a telephonic call to India's foreign secretary Harsh Shringla to brief on the situation.

The Russian foreign ministry also commented on the former German Navy Chief Vice Admiral Kay-Achim Schönbach's comments in Delhi in which he called for good ties with Russia and that Ukraine can never join NATO. The Deputy Director said his statement, "reflects not only the views of the admiral", but also the "views of the political and military leaders of Germany".

The comments by the German Navy chief in Delhi had caused a diplomatic storm in Germany and Ukraine. In Ukraine, the foreign ministry had summoned the German envoy to lodge a protest. Later Schönbach stepped down and handed over his resignation.

Zaytsev pointed out that "such signals are getting to us though our diplomatic representations in Germany" and "Berlin has a healthy understanding of the true character of the political process including Ukraine and justifiability of Russian demands regarding the legal guarantees of the security of our country in the western borders bloc discipline of NATO sometimes silence these voices of reason in Germany."