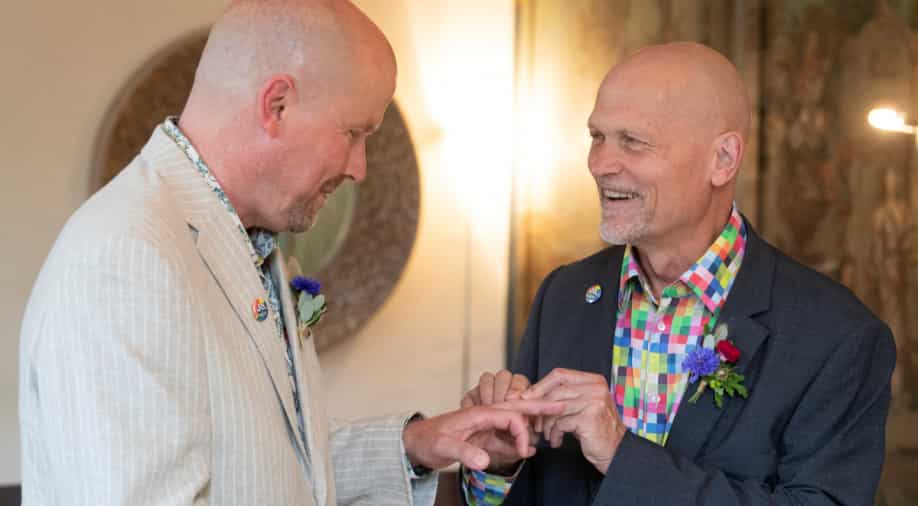 Following a referendum that changed the landscape for LGBTQ rights in Switzerland, the first same-sex couples tied the knot in the country.

Alois Carnier and Peter Leu have become the first time two men to walk out of the civil registry in their town of Schaffhausen as husband and husband.

The couple exchanged touching words, beneath a sparkling chandelier in a mirrored salon, recalling their years together and love for each other with a dozen or so close friends and family in attendance

Geneva mayor Marie Barbey-Chappuis, who conducted the ceremony, said "I am now very pleased to announce that you are officially married."

Instead of exchanging rings, the couple opted to leave on the gold bands from their civil partnership struck exactly 19 years ago.

Similarly, after being together for 21 years, 46-year-old Aline converted her civil union into marriage with Laure at the plush Palais Eynard in Geneva.

After successfully triggering a referendum held last September, the Swiss opposition plans to challenge the government's plans to finally introduce "marriage for all" was not supported by the public as 64.1 per cent of voters backed the introduction of same-sex marriage in the wealthy Alpine nation.

Although Switzerland decriminalised homosexuality in 1942 it was one of the last remaining western European nations where same-sex marriages had yet to be adopted.

However, that changed with the referendum and now same-sex couples can now marry in civil ceremonies and enjoy the same rights as other married couples.