"I am a Rohingya. And Rohingyas are not terrorist": Rohingya activist Tun Khin speaks to WION 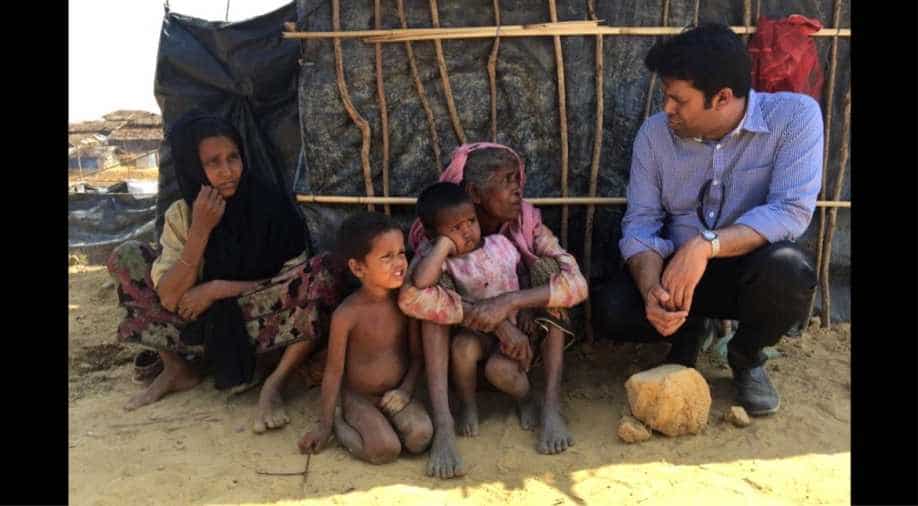 It is monsoon in Burma now, the clouds gathering over the hills cast a long shadow on the lush green meadows of the Burmese countryside. The same shadow, may be a deeper one, has transported itself onto the face of Tun Khin. Tun is a human rights activist from Arakan State in Burma. He is a Rohingya-Muslim with large number of family members still living in Burma, a country which he fled in 2004, in pursuit of higher education in the UK.

As the Rohingya villages get razed down and UN AID forcibly stopped, it became increasingly hectic for Tun Khin. As the Founder-President of the Burmese Rohingya Organisation UK, he was called upon by every international English channel under the sun for an interview.

Rohingyas in Myanmar are beyond our reach, silenced and confined by a repressive regime. So, WION went exploring the pain, the struggle, the desperation and the grit of the Rohingyas through the words of Tun Khin.

Incidentally, never once in the interview did Tun referred to Burma as Myanmar.  “Myanmar is the name given by the military”, he explained to me. On the other hand, “Burma was used by Aung Suun Syu ki. While she was under house arrest, military government changed it  to Myanmar.” Guessing that the change of name comes with lot of personal and political baggage for Tun, we stick with Burma during the interview.

Even though my grandfather was a parliamentary secretary during the democratic period of 1950 to 1962 but I was not recognised as a citizen because of discriminatory laws, particularly the 1982 Citizenship Act that made Rohingyas stateless in their own country.

Why did you flee from your own country, Mr Khin?

Because of continued persecution, I left. I could not go to a university in Burma.

Why? What stopped you?

Even though my grandfather was a parliamentary secretary during the democratic period of 1950 to 1962 but I was not recognised as a citizen because of discriminatory laws, particularly the 1982 Citizenship Act that made Rohingyas stateless in their own country.

Do you have family members still in Burma?

If you are saying that it is the most horrific moment the Rohingyas are experiencing, how do you explain the silence of Aung San Suu Kyi?

I find it really frustrating. She is siding with the military. She won the Nobel Peace Prize, but how can she keep quiet as a human being when so many other human beings are being persecuted.

The Rohingyas supported Aung San Suu Kyi when she was under house arrest. I have personally campaigned for her release in the UK, European Union and in the European Union Human Rights Commission. But, Aung San Suu Kyi is not speaking up for my people. I urge her, as she herself did once, please use your liberty to support ours.

I find India’s recent decision to brand Rohingyas as “terrorist” disappointing. Rohingyas are peace loving people. We are not terrorists.

Why do you think the military in Myanmar is cracking down so hard on the  Rohingyas?

When you look at the Rohingyas, it is a political and a religious persecution we are facing. It is a systematic well-planned move to wipe out the Rohingyas. That is the basic plan of the Burmese military. Rohingya look like Indians, not like other Burmese people. So, they (Burmese military) don’t want to see in the country people of South Asian appearance. There is a kind of hatred that I have witnessed.

And, on top of it, there is a political angle. Rohingya are the largest Muslim minority in Myanmar.

Hate crime/genocide/ethnic cleansing - these and many others terms are being used to describe what is happening to the Rohingyas, a Rohingya yourself, how do you see it?

I completely agree that it is a genocide. It is not even ethnic cleansing. Why? Because direct killings are involved in it. Rohingya have been facing decades of persecution. After 1962, when a general came to power they stripped us of ethnic rights and then by the 1982 law of the citizenship rights.They imposed restrictions on movements and marriage (as well as) confiscation of land by the government and military. They started creating popular violence against Rohingyas. Resulting in mass migration to Bangladesh and India.

How come in a free, democratic country a Rohingya can’t move about? Will you please explain?

If a Rohingya wants to move from one city of Burma to another, a pass is needed which will take 5-7 days. And, that also he will get after bribing some government official.

If a Rohingya wants to get married, he has to apply for a permit. It will take like 3 to 5 years.

If a Rohingya wants to get married, he has to apply for a permit. It will take like 3 to 5 years. You can’t get married without that permission. Only if you provide a big bribe, you can get it in one year. That bribe can range between $500-1000. But Rohingyas have become weak, they don’t have much money. Left with no other option, they marry secretly.

After you get the permission, one has to shave the beard, one can’t marry according to the norms of Muslim culture. They will interview the girl and certainly the man. It is a lot of humiliation as to how they do.

As a Rohingya yourself, and someone who has been speaking up against atrocities committed against the community, what do you see as the solution to this crisis?

Bangladesh, Saudi Arabia and other countries must stand up for the UN Security council to intervene, to send UN Peacekeeping Force to Burma. If this does not happen soon, there will be no more Rohingyas left in few more days.

I find India’s recent decision to brand Rohingyas as “terrorist” disappointing. Rohingyas are peace loving people. We are not terrorists. Even if there were some attacks from the Rohingyas, it was an act of desperation. Sometimes we don’t get water to drink, you have to understand. Burma has become an open prison for us.