Hundreds of dogs hound May for 'Wooferendum' on Brexit 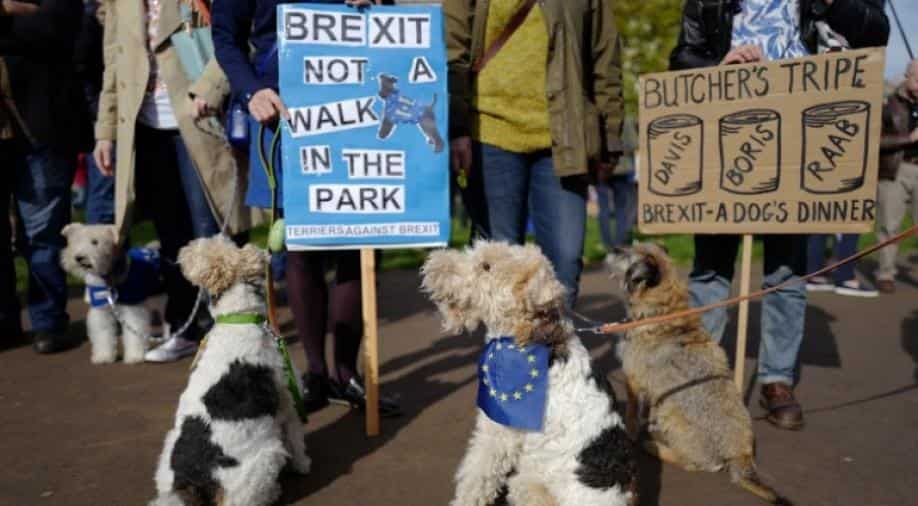 Huskies, Chihuahuas, boxers and beagles -- and even a lumbering Leonberger -- joined a "Wooferendum march" in central London on Sunday as their pro-European owners called for a new people's vote on Brexit.

The gathering commanded politicians, actors and activists, accompanied by hundreds of four-legged friends, all united in their opposition to Britain's departure from the EU next March.

"We will not roll over... it's time for the Wooferendum," said Labour MP Stella Creasy, a self-confessed cat -- not dog -- owner, in a pun-laden speech. "Go fetch people: get Britain a better future."

The dog parade — which drew pooches and people from far beyond the capital -- took place two weeks before a larger pro-referendum rally planned for October 20.

British Prime Minister Theresa May has ruled out a new Brexit poll, saying it would betray the result of the 2016 vote and destroy trust in politicians.

But politicians from all parties have joined a growing movement for Britons to have another say on the issue.

"In a campaign, use whatever you can that helps," he added of Sunday's pet prelude. "Today is showing that this country just isn't uniting around any vision for Brexit and it's one way of fighting."

After Brexit, Britain may have to leave the EU's pet passport scheme, which allows registered pets to travel to member states freely with their owners.

As a result of the change, dog owners are likely to face increased bureaucracy and need more preparation time in order to take their canine companions to the continent.

Some at the march bemoaned that and other predicted effects -- such as difficulty importing pet food and a decrease in the number of vets in Britain.

"It's just one of the many aspects that people have taken for granted... and now won't be there," marketing consultant Anthony Robinson, 48, of London, said of the much-loved pet travel scheme.

He attended with Fred, his two-year-old Corgi -- the breed favoured by Queen Elizabeth II.

Thanks to a pet passport, two-year-old retriever Summer was able to travel to Venice and Rome recently, its owner Diana Muvoli told AFP.

"She wants to continue her travels," said Muvoli, whose husband Umberto is Italian and regularly visits family there.

"We're concerned for all of us," he added.

At least 1,000 people took part in the march, some sporting fancy dress and painted dog faces, after assembling with their furry companions near Trafalgar Square.

"It's nice to highlight a serious point in such a fun way -- everybody loves dogs," said German university lecturer Flora Renz, 30.

She has lived in Britain for a decade and turned out with Billy, a three-year-old beagle draped in an EU flag.

Others were decked out in signs -- "Brexit's barking mad" -- while marchers carried similarly themed placards, including "Brexit, it's a dog's dinner".

"We were misinformed first time around and if there were a second referendum... it would go very differently," said personal trainer Mike Brooke, 37, of London.

His giant three-year-old Leonberger, Odin, sported a "bears against Brexit" sign on his back.

The atmosphere was light-hearted, with urinals for the dogs plastered with images of ardent Brexiteers like Boris Johnson and Nigel Farage drawing laughs.

"They're peeing on command on them," said delighted organiser Daniel Elkan. "People have got really into it. They might not have marched before but came today because their dogs have led them."

With tails wagging and barks reverberating, the crowd pawed its way through London's government district, before standing -- or sitting in many canine cases -- for speeches in Parliament Square.

"It's very British," said Dominic Dyer, an animal welfare campaigner. "Nowhere else in the world would people bring their dogs to a protest."