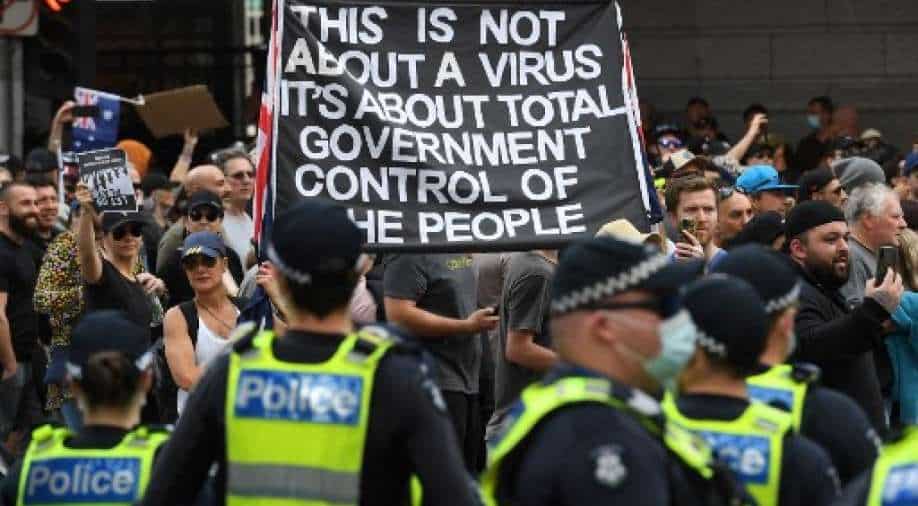 Protesters march through the streets during an anti-lockdown rally in Melbourne Photograph:( AFP )

Victoria state police said that they arrested 218 people in the state capital Melbourne.

Australian police arrested hundreds of anti-lockdown protesters in Melbourne and Sydney as seven officers were hospitalised as a result of clashes, as the country saw its highest ever single-day rise in COVID-19 cases.

Mounted police used pepper spray in Melbourne to break up crowds of more than 4,000 surging toward police lines, while smaller groups of protesters were prevented from congregating in Sydney by a large contingent of riot police.

Victoria state police said that they arrested 218 people in the state capital Melbourne. They issued 236 fines and kept three people in custody for assaulting police. The arrested people face fines of $3,900 each for breaching public health orders.

Police in New South Wales, where Sydney is the capital, said they charged 47 people with breaching public health orders or resisting arrest, among other offences, and issued more than 260 fines ranging from $35 to $3,000. The police said about 250 people made it to the city for the protest.

Meanwhile, Prime Minister Scott Morrison said Australia will stick to its lockdown strategy against the coronavirus until at least 70 per cent of its population is fully vaccinated.

The country set a record with 914 infections, its highest daily figure, as the southern and eastern states of New South Wales, Victoria and the Australian Capital Territory remain under a strict lockdown.

"You can't live with lockdowns forever and at some point, you need to make that gear change, and that is done at 70 per cent," Morrison said in a television interview on the Australian Broadcasting Corp's Insider program.

Lockdowns are a key element of the federal government's strategy to rein in outbreaks until the 70 per cent level is reached, with borders being re-opened gradually when the figure climbs to 80 per cent.