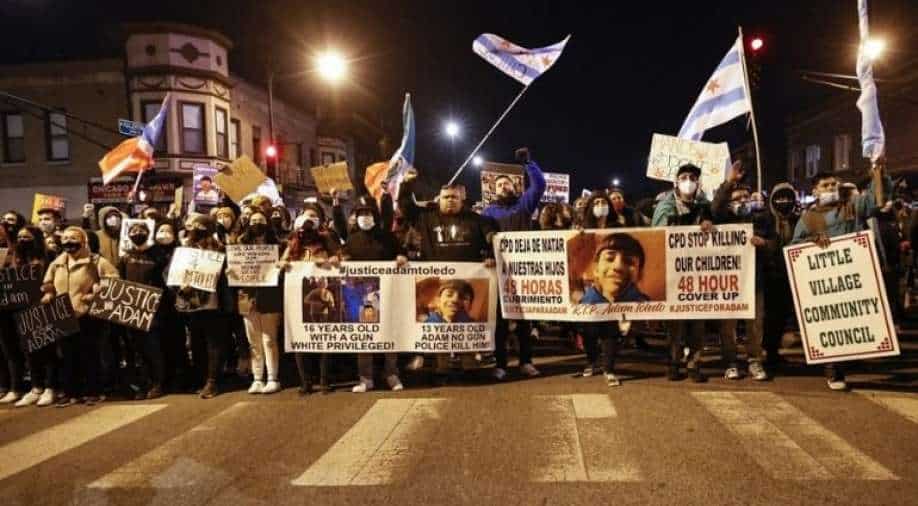 Protesters march through Logan Square neighborhood during a rally on Friday in Chicago, Illinois. Photograph:( AFP )

Hundreds of people marched through the Logan Square neighborhood in Chicago on Friday evening, calling for overhauls to the city’s police department after the fatal shooting of 13-year-old Adam Toledo by a police officer in March.

Adam was shot and killed by a police officer, Eric E. Stillman, 34, in the early hours of March 29. In video of the shooting, released Thursday by an independent city agency that investigates police conduct, Adam is chased down an alley by a white police officer, who orders him to stop and show his hands. An analysis of the video, slowing down events that took place in the space of a second, shows the boy then appearing to toss a handgun nearby and raising his hands in the air, just before the officer shoots him in the chest.

Jasmin Cardenas, who attended the march with her two small children, cried as she stood holding a sign supporting Adam and his family. She lives in Little Village, the predominantly Latino neighborhood where Adam was killed, and runs an after-school arts program that once worked with children at Gary Elementary, where Adam was a student.

The neighborhood is sorely lacking in services for children and teenagers, she said, and needs nurses in the schools and more art programs to keep young people busy.

“I’m just in shock at how many of us made mistakes and we’re still here,” Cardenas said. “He did all the right things. He put his hands up, and he still got shot.”

With renewed national attention on police conduct amid the Derek Chauvin trial in Minneapolis, demonstrations also took place beyond Chicago on Friday night.

In the Minneapolis suburb of Brooklyn Center, Minnesota, protests continued in front of that city’s police department for a sixth straight night following an officer’s fatal shooting of a 20-year-old motorist, Daunte Wright.

Protesters occasionally threw bottles of water and pushed up against a fence in front of the Police Department. Police fired a volley of pepper spray, rubber bullets and grenades that made a loud bang into the crowd, injuring several people and briefly setting the umbrella that one protester had used to block pepper spray on fire. There was no curfew Friday, but police declared the assembly unlawful before running at the crowd just after 10 p.m., making dozens of arrests.

In Chicago, speakers addressed a crowd in a large neighborhood park at the beginning of the rally, calling for defunding of the police and for measures like rent control to be enacted. At the mention of Lightfoot by one of the speakers, the crowd booed loudly.

“Our goal is to not let people forget and keep being active,” said Maximo Rodriguez, who said he had been involved in social justice causes since 1985, when he was a student at the University of Illinois at Chicago. “The problem isn’t us, it’s the police. Whenever they’re around, there’s a chance for violence.”

Evelene Certa, 13, of suburban Berwyn, has been going to protests with her family her entire life, she said. “This one, it’s a kid my age,” she said, before pausing to gather herself. “It could’ve happened to me. It really changes my point of view.”