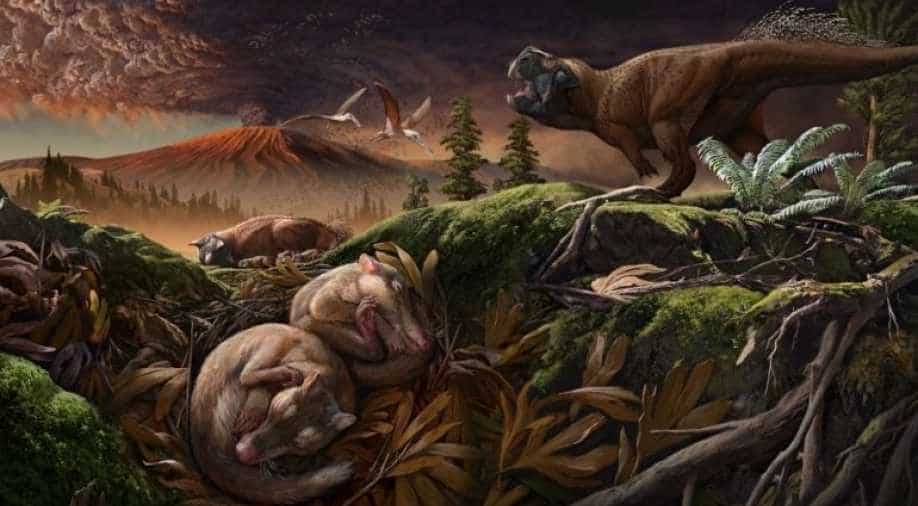 This artistic reconstruction released by the journal Science on December 5, 2019, shows the environmental setting when the animal Origolestes lii (L) died. The specimens came from the Lujiatun beds of the Yixian Formation, Liaoning Province, China. Photograph:( AFP )

Human activity is solely responsible for 96 percent of mammal extinctions in the past 126,000 years, according to a new study

Human activity is solely responsible for 96 percent of mammal extinctions in the past 126,000 years, according to a new study. In addition, the fossil records, as examined by scientists also indicate further extinctions of 558 mammal species in the near future.

A new study from the US journal Science Advances researched on the levels of impact humans had on the extinction of mammals and found that human population size in many parts of the world will “undoubtedly pose a serious challenge for the future conservation of biodiversity."

In Pics: 8 animals you didn't know could sing!

The study contradicts previous researches that indicated climate change to be the reason behind historical extinctions, as a mixed model has been tested in this study that accounts for human and climate factors and the interaction between the two. "We find no detectable effect of climate on mammal extinctions throughout the studied time frame. These results stand in contrast to previous support of the hypothesis that the interaction of humans and climate has been driving mammalian extinctions (albeit limited to megafaunal genera) during this same time frame (6). Human population density increases, on the other hand, have had a large detectable effect on mammal extinctions, explaining past extinctions with ~97% accuracy."

According to these models, the extinctions that have occurred in the past centuries only represent the "tip of the iceberg", compared to the looming extinctions of the next decades. Researchers have further predicted that the number of mammal species going extinct globally is likely to reach 558 by the year 2100.

The current diversity of mammals consists of approximately 5700 extant species. In addition, at least 351 mammal species have gone extinct since the beginning of the Late Pleistocene 126 thousand years ago, 80 of which are known from historical reports since the year 1500 CE (Common Era), while all others are only known from fossil or zoo archeological records.

In Pics: Are animals next? See how many have tested positive for COVID-19 so far!

Despite the findings, scientists say there is still a window of opportunity to prevent many species from going extinct by improving conservation efforts. The International Union for the Conservation of Nature (IUCN) currently has more than 120,000 species on their red list of threatened species. Many conservation successes have taken place in recent years, with some species moving toward less threatened IUCN categories.

Researchers say they hope their alarming predictions will "foster increased realization on the urgency and scale of the conservation efforts needed to safeguard the future of mammalian diversity." According to the IUCN, more than 32,000 are currently threatened with extinction.