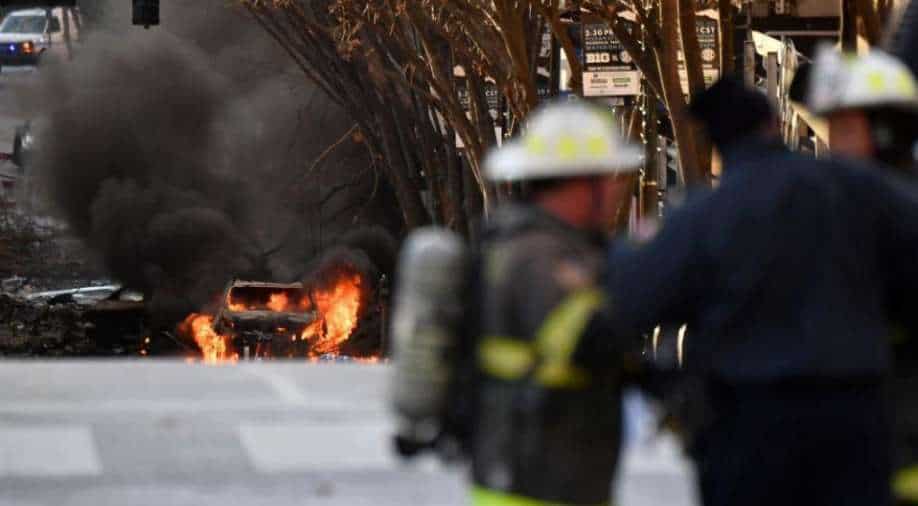 A recorded message playing from the motorhome warned that a bomb would detonate within 15 minutes -- enough time for a bomb squad to clear the area before the explosion.

The parked motor home, which exploded in downtown Nashville at dawn on Friday morning, blasted minutes after a recorded announcement emanating from the vehicle warned of a bomb.

Police has hence concluded it was an "intentional act" that injured at least three people.

It was uncertain whether anyone was inside the recreational vehicle when it exploded on Christmas morning, but police reported hours later that investigators had found possible human remains near the site.

The powerful explosion shattered windows and ripped apart trees, wounding several people when it detonated at 6:30 am (1230 GMT) in a section of the southern US city that was largely deserted due the early hour and the Christmas Day holiday.

Police chief John Drake told reporters there were no confirmed fatalities, but authorities were examining tissue found at the blast site that they believe could be human remains.

In a dramatic sequence of events that shattered the Christmas morning calm, police rushed to the area after getting reports of gunshots and noticed the vehicle as they arrived on the scene.

A recorded message playing from the motorhome warned that a bomb would detonate within 15 minutes -- enough time for a bomb squad to clear the area before the explosion, Drake and police spokesman Don Aaron told reporters earlier Friday.

Witnesses told the Tennessean newspaper the warning, spoken in a woman's voice, counted down to the blast.

Fire officials said three people were taken to local hospitals with relatively minor injuries, and they were listed in stable condition. Authorities said quick action by police to begin evacuating the area before the blast likely prevented more casualties.

Nashville Mayor John Cooper ordered a curfew imposed around the blast site through the holiday weekend as FBI investigators comb the scene, though police said they were aware of no further threats to Tennessee's most populous city.

Pictures shared on social media from the immediate aftermath showed thick plumes of black smoke rising from the burning RV and storefronts that had been torn apart.

The blast happened near an AT&T facility, knocking out phone service for many in the area. The telecommunications company said that "given the damage to our facility it will take time to restore service."

The Nashville International Airport announced it had temporarily halted flights due to "telecommunications issues" associated with the blast.

Both President Donald Trump and President-elect Joe Biden were briefed on the incident, which is being investigated by the FBI and the US Bureau of Alcohol, Tobacco, Firearms and Explosives.

Biden issued a statement saying he and his wife Jill Biden "thank all the first responders working today in response to the incident, and wish those who were injured a speedy recovery."

Trump's spokesman Judd Deere tweeted that the president is "grateful for the incredible first responders and praying for those who were injured."